VeChain (VET) is a blockchain project that seeks to render IoT-based services. VeChain was created to facilitate and secure the collection, management, and exchange of data by allowing manufacturers to add sensors, such as RFID tags, to their products that can then record data onto the VeChain blockchain. Vechain has its physical base in Singapore.

Ranking 24th largest blockchain asset, VeChain coin has carved out a niche for itself as VET coin’s use case extends from assets authentication, tracking of goods to product maintenance simplification.

Last month in June, VeChain announced partnerships with Walmart subsidiary and premium shopping chain Sam’s Club and the Shenzhen Yuhongtai Foods Company. Here, ToolChain will be employed to track a variety of food products such as pork.

Later on in June, VeChain’s medical data management platform ‘I-Dante’ was also launched at the Mediterranean Hospital in Cyprus.

It is been said that an exodus of traders who tried to evade Bitcoin (BTC) indecisiveness have flocked to Vechain referred to as ”Blockchain” for reasons best known. 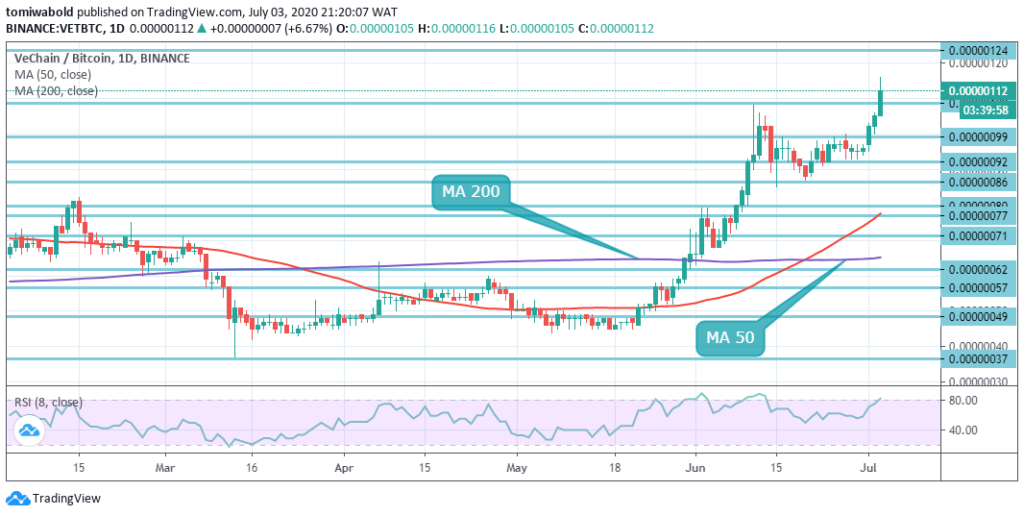 At the time of writing, VeChain (VET) is trading at 112 Satoshis, after setting a year-to-date high earlier today bringing it up by 200% above the lows it set during the March market carnage.

VeChain bullish strike seems to be borne out of positive sentiment spurred by a review from the Early Metrics rating agency on VeChain’s potential as one of the fastest-growing startups, commending its growth on logic, market positioning, and operational implementation.

VeChain (VET) extended its year to date gains by more than 85% to stand at a high of 116 SATs gaining 8.57% in the process. VeChain’s continued its bullish momentum which it incurred on Thursday after the positive ratings from Early Metrics. Although, VeChain (VET) is gradually slowing down its huge momentum in its Bitcoin pairing the mainstay remains that VET/BTC is trading above a string of concrete support levels beneath.

VET seems to be riding on the back of positive sentiment against an underperforming Bitcoin which had been stuck within a consolidation web in the past weeks.

VET may be seen to sustain its bullish strike as it just broke out of a pennant structure which may push it further upwards towards 129-132 Satoshis. The crypto-token is showing underlying strength resulting from a string of concrete support levels.

On the flip side, if Bitcoin resumes its uptrend, VET may experience a pullback in which it will test the string of concrete support level beneath in the case of such an event.