At the Lowest, the Cryptocurrency Was Trading at $0.25 at the Start of the Week

IOTA is a transaction settlement token for the Internet of Things (IoT). After a poor performance in the legacy markets, including gold in the prior week, Bitcoin and some notable Altcoins such as IOTA were brought lower. The cryptocurrency market’s ability to weather the storm is based on Bitcoin’s performance as a benchmark. IOTA’s latest rebound appeared as a part of a wider bullish rally across the cryptocurrency market. After its recent struggle beneath its yearly highs of $0.45, bulls regain strength on IOT/USD, with eyes on $0.30. At the lowest, the cryptocurrency was trading at $0.25 at the start of the week. IOTA’s total market cap now stands at $812 million with a trading volume of $14.17 million in the past 24 hours. At the time of writing, IOTA is teetering at $0.294 amid a short term bearish bias. The IOTA Foundation has launched a new version of the Pollen Testnet – v0.2.4. This involves many enhancements to the network, which takes IOTA closer to full decentralization.

*At the lowest, the cryptocurrency was trading at $0.25 at the start of the week
*After its recent struggle beneath its yearly highs of $0.45, bulls regain strength on IOT/USD, with eyes on $0.30
*The IOTA Foundation has launched a new version of the Pollen Testnet – v0.2.4 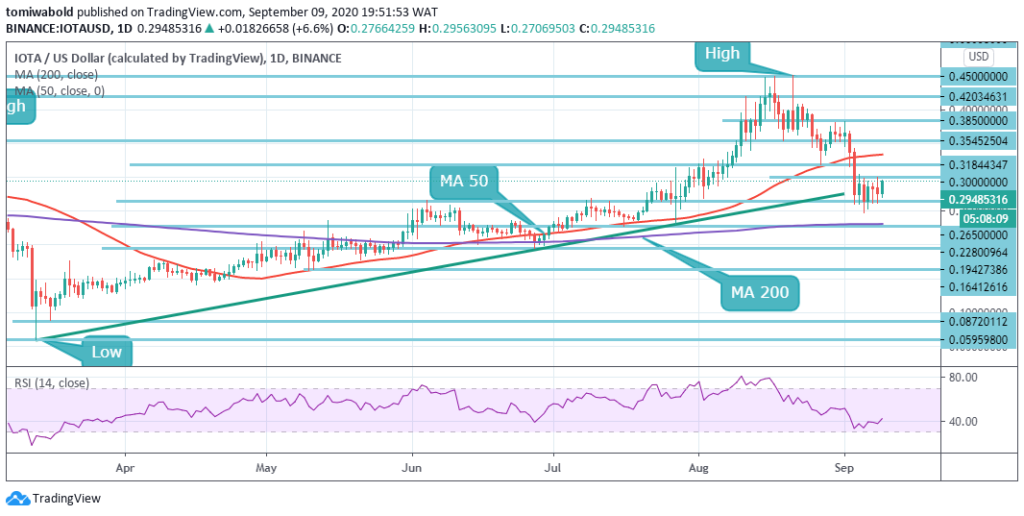 On the daily chart, as of now, the pair is attempting to reach the key $0.300, a near term resistance level with the latest records of holding the price lower. If it breaks the ceiling, then bulls would target levels between $0.318 and $0.450. Whether or not buyers can sustain this momentum may depend largely on breaking the key resistance level.

The RSI is already beneath its midlines and until it breaks through to the upside, its long-term outlook may remain somewhat unclear. Despite its medium, to long-term uncertainties, IOT/USD continues to guard the macro support it has established within the $0.265 t0 $0.250 buyers confluence region. 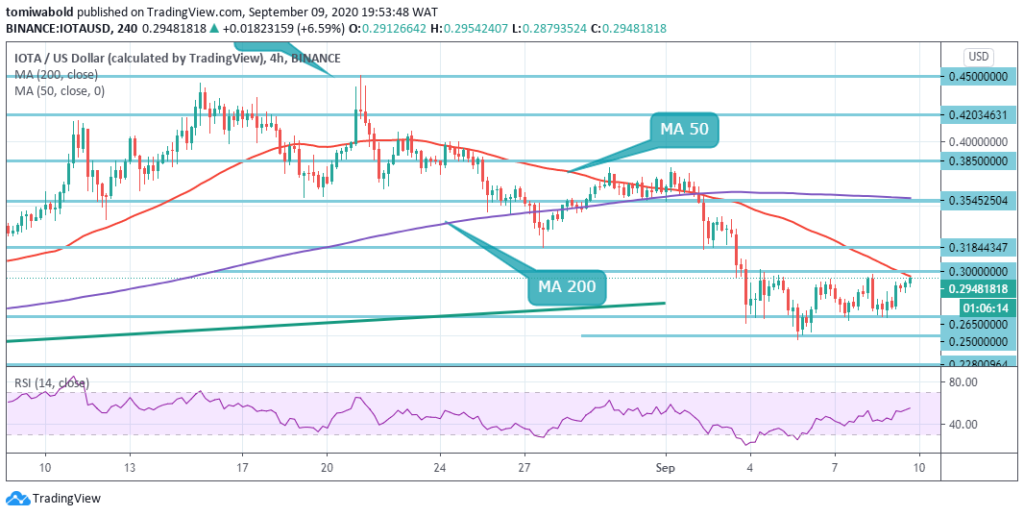 IOTA has an optimistic short term outlook, however, IOTA has dropped beneath resistance at $0.30 and has attempted the same level multiple times in the past few days. It has been consolidating at the lower channel and now capped at the upside border by the 4 hour MA 50. The price may decline to the $0.250 support level If the MA 50 is not breached although the trend anticipates bull return.

Near-term momentum indicators suggest price is close to a breakout in the present zone without any threat to the trend. The IOT/USD pair is only bullish while trading above the $0.30 level, key resistance is found at the $0.318 and the $0.385 levels. If the IOT/USD pair trades below the $0.265 level, sellers may test the $0.250 and $0.228 levels.

IRS Offers $635,000 To Anyone Who Can Crack Monero And Lightning Network

Yearn.Finance (YFI) Climbs Past $34,000, Here Is the Loop Between Bitcoin, XRP, XLM, BTC Forks, and DeFi

Bitcoin Fast Profit Will Help You Earn Regardless of Market Movement

With Big Money Rush, Achieving You Financial Goal Is Closer Than You Think