Since the Start of the Day and in the Last 24 Hours, the Coin Has Got Nearly 3 Percent

IOTA is a cryptocurrency with tons of ardent fans who think IOTA is the most scalable cryptocurrency due to its tangle architecture. This passion and some support from the industry helped IOTA maintain its influence in the crypto sphere. IOTA is currently the 24th largest digital asset with an estimated market cap of $550 million and an average trading volume of $16.3 billion a day. Since the start of the day and in the last 24 hours, the coin has got nearly 3 percent. Despite the lower open price, IOT/USD is aiming past the $0.2 level key barrier. IOT/USD is shifting hands at $0.1965 at the time of writing. During the Global Legal Hackathon, IOTA Foundation and law firm Dentons released a distributed ledger-based digital health passport (DLT), called Selv. The solution is aimed at restoring people to their everyday activities amid the COVID-19 pandemic. Selv is a decentralized application, free and accessible for global health management.

*Despite the lower open price, IOT/USD is aiming past the $0.2 level key barrier
*Since the start of the day and in the last 24 hours, the coin has got nearly 3 percent
*IOTA Foundation and law firm Dentons released a distributed ledger-based digital health passport (DLT), called Selv 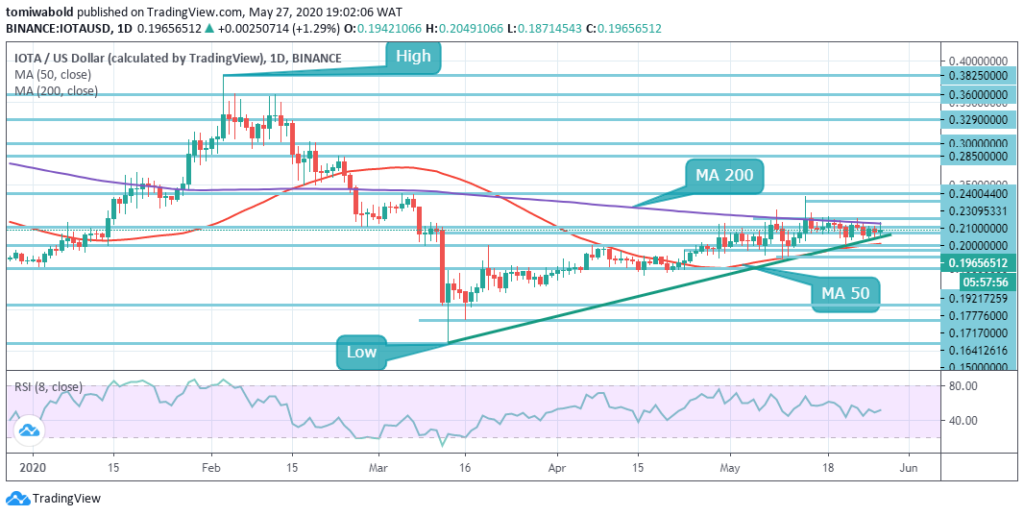 As seen from the daily chart, MA 200 is establishing strong resistance at $0.2040. Since the start of May, this MA has been restricting the advance, though by the end of February market trade beyond daily MA 200. A continuous step beyond this resistance may build positive bullish traction and drive the price to $0.2100, the daily chart ‘s initial upper horizontal resistance level.

At present, for any prolonged recovery, we may expect to see a continuous push beyond $0.20. On the downside, we are keeping an eye on $0.1777 (the horizontal support underneath ascending trendline). The price may slip down towards $0.1717 once its broken. The medium-term bias appears skewed up once buyers breach $0.20, resistance is anticipated at $0.2100 and the next $0.2400 (sellers confluence zone). 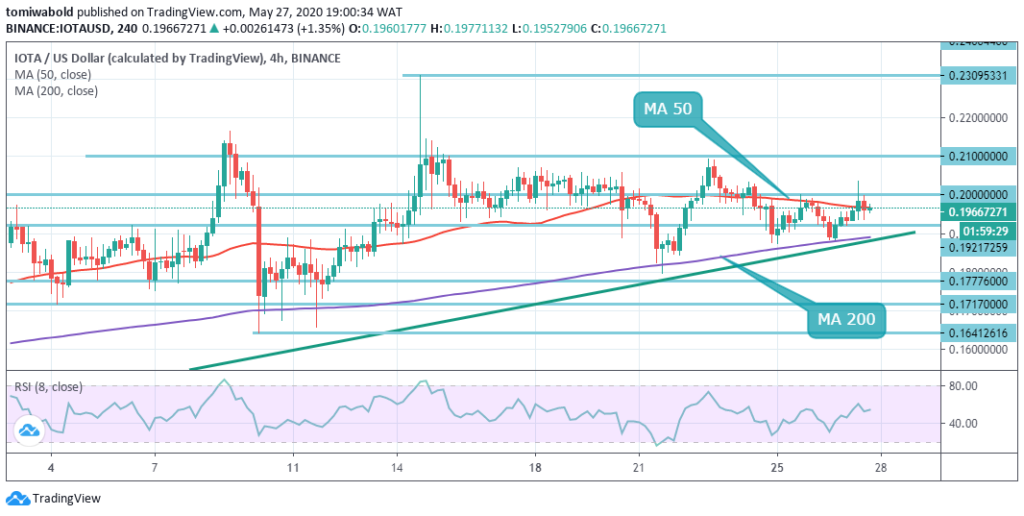 IOTA trades on the flipside at $0.1965 amid a trend of growing range. The May low recovery has been gradual but steady from $0.1621. That being said, the retracement level of 50 percent taken between the last near-term swing high at $0.2309 to a short-term swing low at $0.1641 is now a hard problem to solve past $0.20. The current consolidation is in the face of this resistance, which targets the confluence resistance at $0.2100.

Consolidation is likely to take over from now on, and into the next sessions, as per the RSI. Similar sideways activity is stressed beyond the ascending trendline support by the horizontal motion of the MA 200 and MA 50. It is therefore important that the resistance to confluence is breached by all implications. Anticipate IOTA to find support at the 4-hour MA 200 ($0.1890), $0.1777 and $0.1717, if a reversal comes into effect.