IOTA Price Has Been on a Roll Recently, Trading in a Continuous Downtrend After Reaching High at $0.45

A green day for the entire market but Bitcoin continues losing its dominance down almost 1% since mid-August. Altcoins continue gaining ground, especially IOTA which has climbed from a March low of $0.59 to hit a $0.45 high on Aug 21. The total market capitalization has been growing significantly after the big crash on March 12. IOTA’s total market cap now stands $1.01 billion with a trading volume of $30.46 million in the past 24 hours. IOTA price has been on a roll recently, trading in a continuous downtrend after reaching high at $0.45. The latest rally peaked after the IOT/USD price rebounds past $0.35. At the time of writing, IOT/USD is changing hands at $0.3657, down from the intraday high of $0.3700. Recently, the European Patent Office issued Mastercard a new patent for the billing method based on IOTA’s Tangle. Mastercard’s patented method involves a model that used a seamless storage system for billing device usage.

*IOTA price has been on a roll recently, trading in a continuous downtrend after reaching high at $0.45
*The latest rally peaked after the IOT/USD price rebounds past $0.35
*The European Patent Office issued Mastercard a new patent for billing method based on IOTA’s Tangle 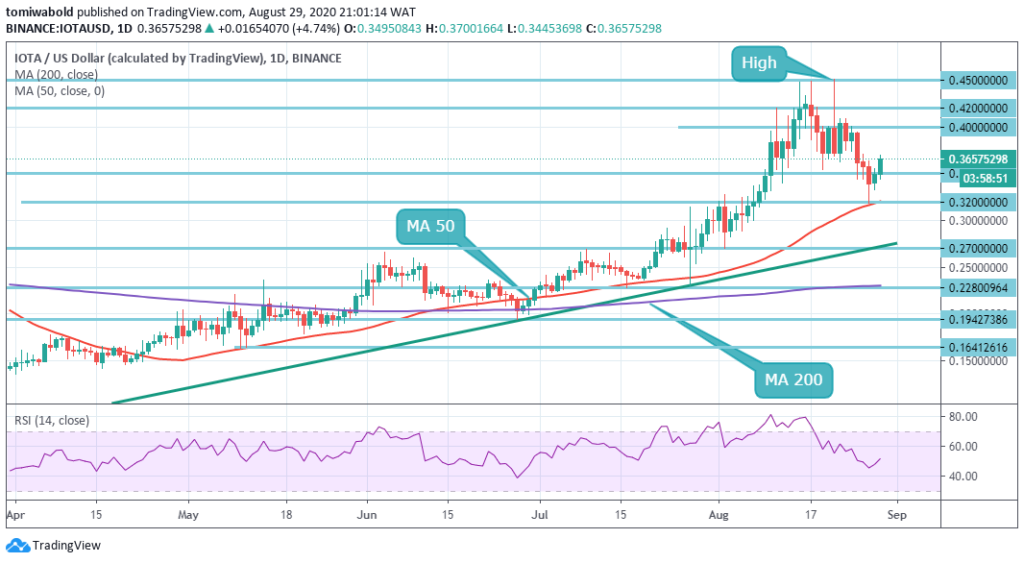 On the daily, technicals suggest an active bull trend with a retest of August highs likely. The medium-term momentum indicators suggest price is slightly returning to the bull zone without any threat to the overall trend. IOTA/USD has now resumed the bullish continuation as the buyers gain control of the market with eyes at the $0.4000 resistance level. 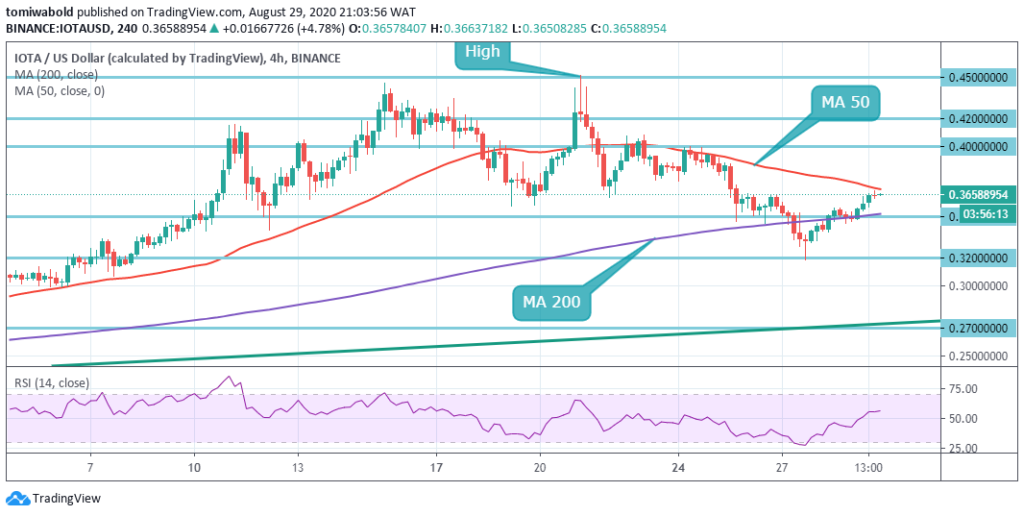 IOTA’s consolidation period has been a bit more pronounced than expected on the 4 hour time frame but the big support level at $0.3500 was held a few times in a row. IOT/USD has had a bullish session following two consecutive sessions. The price is trending in a channel formation and is presently sandwiched between the MA 50 and MA 200 4 hour chart. The RSI shows sustained bullish momentum.

IOT/USD is starting to emerge through strong technical buying pressure along with the wider crypto market following a breach of the $0.3500 resistance turned support zone. The IOT/USD pair is only bullish while exchanging beyond the level of $0.3500, the main resistance is seen at levels between $0.4000 and $0.4500. If the IOT/USD pair exchanges beneath $0.3500, then sellers may test the support levels of $0.3200 and $0.2700.