It Shifted From a Starting Price of $0.1832 Increasing Positive 0.50 Percent on the Day

IOTA price ranks as one of the market’s lowest single-digit risers. It shifted from a starting price of $0.1832 increasing positive 0.50 percent on the day. On the upward, it has hit an intraday high of $0.1915, and IOT/USD records a low of $0.1779. Most cryptocurrencies correct lower since the recent market rally; but, given the dismal activity, IOT/USD range steady at $0.1850 while Bitcoin is up 0.50 percent on the day and trading at $8.890, Ethereum is negative at 0.5 percent steady and barely holding at $205. On the other side, after a 1.0 percent drop in price, Ripple is trading at $0.2164. SOCIETY2 unveiled a decentralized social network built on IOTA barely a few days ago that gives back users power over their privacy and ownership of content. The recently launched social network utilizes distributed ledger technology (DLT) from IOTA to provide users with an option to mainstream social platforms.

*On the upward, it has hit an intraday high of $0.1915 and IOT/USD records a low of $0.1779
*It shifted from a starting price of $0.1832 increasing positive 0.50 percent on the day
*SOCIETY2 unveiled a decentralized social network built on IOTA barely a few days ago 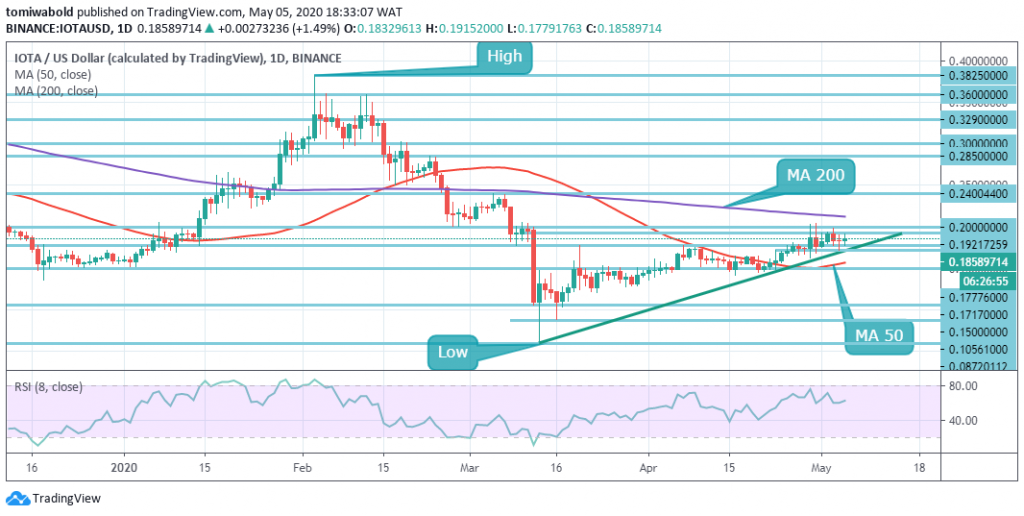 IOTA moves steadily within the MA 50 support range and the MA 200 resistance. The disparity in both the moving averages suggests seller strength is expanding given the recent broader rally on the market. Besides, the development of an upward wedge pattern may lead to a medium-term reversal. However, the reversal can be forestalled if the bulls are accumulating sufficient momentum to pull IOTA beyond $0.20 and the MA 200.

Meanwhile, bullish confidence in the medium term is unchanged, especially with the RSI currently leading to overbought (70). The upward trendline also raises the pair into the optimistic territory and displays a bullish divergence. In other terms, medium-term bullish momentum will quite probably stay intact this week, while the upside trendline in the aforementioned region will serve as a solid buffer. 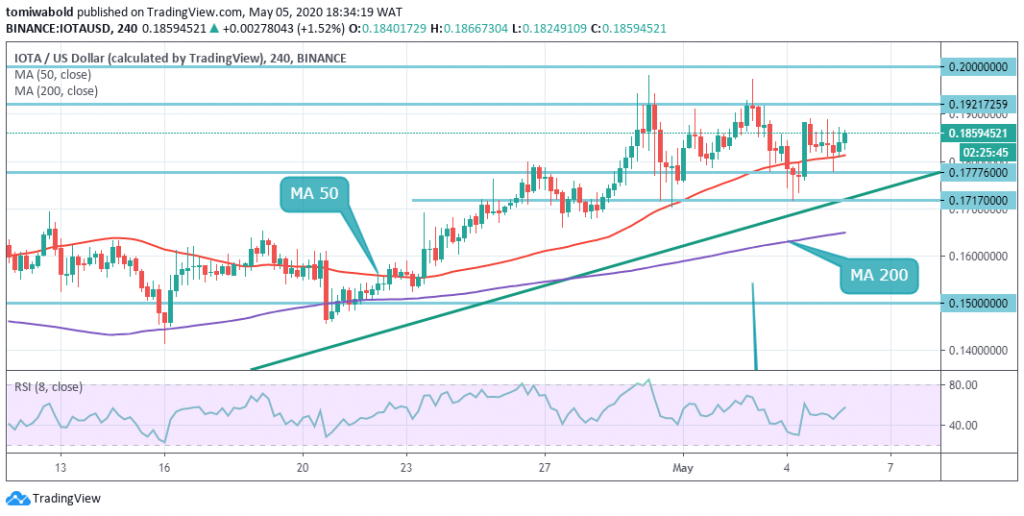 IOT/USD is seen to continue advancing from $0.1500 beyond the $0.1900 mark in the previous five days in a row as the bulls maintained much of the rally. The price has soared beyond the rising trendline support structure and thus will aim to surpass resistance key $0.2000 level from $0.1921 level. The moving averages indicate improved bullish momentum, while the candlesticks had more of the green session than the red sessions.

The shrinking of price channels ranging from $0.1921 to $0.1717 suggests declining market volatility which may well inevitably lead to a price breakout in the direction of the prevailing trend. This market channel is inclined to impede the rebound and initiate short-term vertical trading with the initial downside target of $0.1500, but on the contrary, the upside is likely to gain momentum with the next emphasis on $0.2000 as the psychologically key level.