The cryptocurrency market terrain is mixed with red and green. BTC traded to highs above $26k while the majority of Altcoins manage to gather momentum after the XRP saga. IOTA reached highs of $0.4531 on November 24, but the price failed to hold above this level. IOTA/USD then found solid support at the $0.271 level while the pair fights to break key resistance above $0.31. IOTA is trading at $0.2904 at the time of this post, down from its prior day high of $0.3270. Daily, the coin has lost nearly 2% and 15% on the weekly. IOTA’s total market cap now stands at $7.9 million with a trading volume of $21.55 million in the past 24 hours. IOTA Releases Stronghold Alpha. Stronghold is an open-source software library that was originally built to protect IOTA Seeds but can be used to protect any digital secret. On December 24, in an official blogpost, IOTA announced the Alpha release of the IOTA stronghold. Stronghold will form a secure base for the new IOTA Firefly wallet. 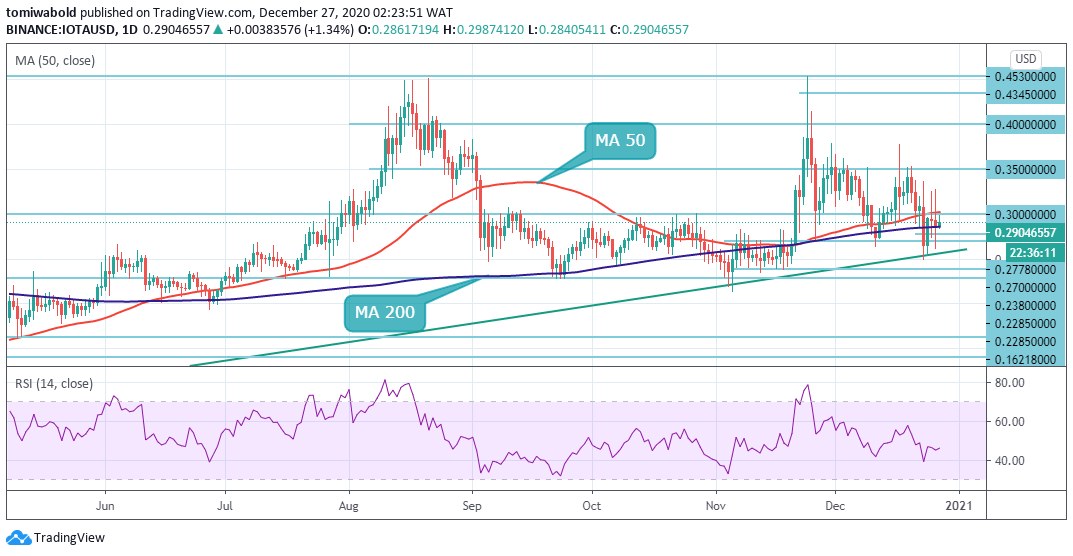 IOTA rebounded from lows of $0.25 on December 23 to trade at highs at $0.3368 in subsequent sessions. Further resistance at $0.3368 caused the IOT price to drop. A pick up in IOTA price to prior day highs of $0.3270 was bluntly rejected by the bears as IOTA made a subsequent downward move.

IOTA’s decline on the 4-hour chart paused when the token embraced near term support at $0.2778. IOTA lost the 4 hour MA 50 and MA 200 since December 23rd. IOTA may then need to reclaim the MA 50 near $0.31 for its uptrend to continue. The resistance cap at the MA 200 situated at the $0.32 mark may further limit upside action.

Bitcoin Climbs Past $27,500, This Is What Analysts Are Saying on BTC Price and Altcoins in the Near Term

Bitcoin Climbs Past $27,500, This Is What Analysts Are Saying on BTC Price and Altcoins in the Near Term