0
SHARES
20
VIEWS
Share on FacebookShare on Twitter
John McAfee, one of the most renowned and powerful advocates for ICOs and crypto-economy has taken the opposite approach on ICOs in the wake of SEC [U.S. Securities and Exchange Commission] threats, as mentioned in his tweet posted today.

In his tweet, McAfee has clearly mentioned his disassociation with ICOs to the point where he no more recommends them to his crypto-fans. McAfee has also hinted toward arrest of those involved in any ICO-related activities. However, the nature of the mentioned threats is yet unclear and demands more clarity.

This latest development is a sequel to McAfee’s June 14 tweet on the SEC’s labeling of ICO tokens as securities. While promising that he would fight the Commission “with every last breath,” McAfee did say that he would submit to the law.

Earlier in June, he challenged SEC chairman, Jay Clayton, to a debate over the status of ICO tokens. The SEC previously issued warnings to celebrities who endorse cryptocurrency ICO projects. According to the regulatory agency, such endorsements might be unlawful — especially in the absence of full disclosure of direct/indirect compensation on the part of the celebrity in question.

It was not long ago when McAfee challenged Jay Clayton, the Chairman of SEC to take a seat in a cryptocurrency debate with him on CNN after Clayton’s statement that reads:

SEC, in its official statements, had triggered agitation among crypto-community; and McAfee went ballistic with his tweets on the issue. 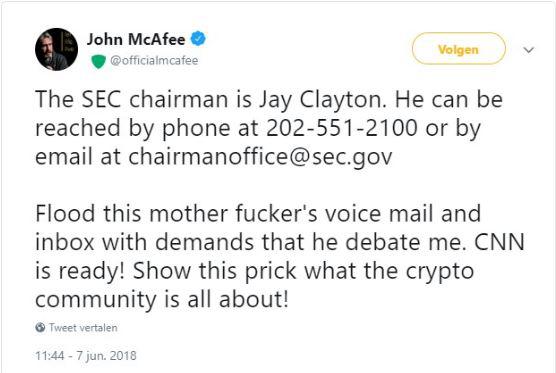 Despite being a polarizing and controversial figure, McAfee is a major figure within the industry. According to his “cryptocurrency team,” McAfee’s ICO endorsement tweets are prolific, with only one tweet capable of attracting millions of dollars in investments.

Top Cryptocurrency Lending Blockchain Platforms That You Should Use

Paris Hilton's Father Auctions His Mansion Worth $38 Million For Cryptocurrency

Paris Hilton's Father Auctions His Mansion Worth $38 Million For Cryptocurrency