Just Like Bitcoin, Ethereum Bulls May Be Poised for a Run As Demand Returns

The second cryptocurrency by market cap, Ethereum, is at the moment trading at $164 after a bearish correction in which it shed off 15% off its weekly highs of $177.

Although Ethereum is still 90% below its all-time high of $1,400, its recent price depicts nearly a 100% jump from the low that was set in the March market carnage.

Recent stats have however indicated ETH bulls may soon take-off in a dash as ETH demand is on the rise. Coin metrics have also indicated a bullish continuation in Ethereum’s price trend.

Intotheblock metrics, for instance, “in the money” and “Bid-Ask Volume Imbalance” portray an overly bullish Ethereum. 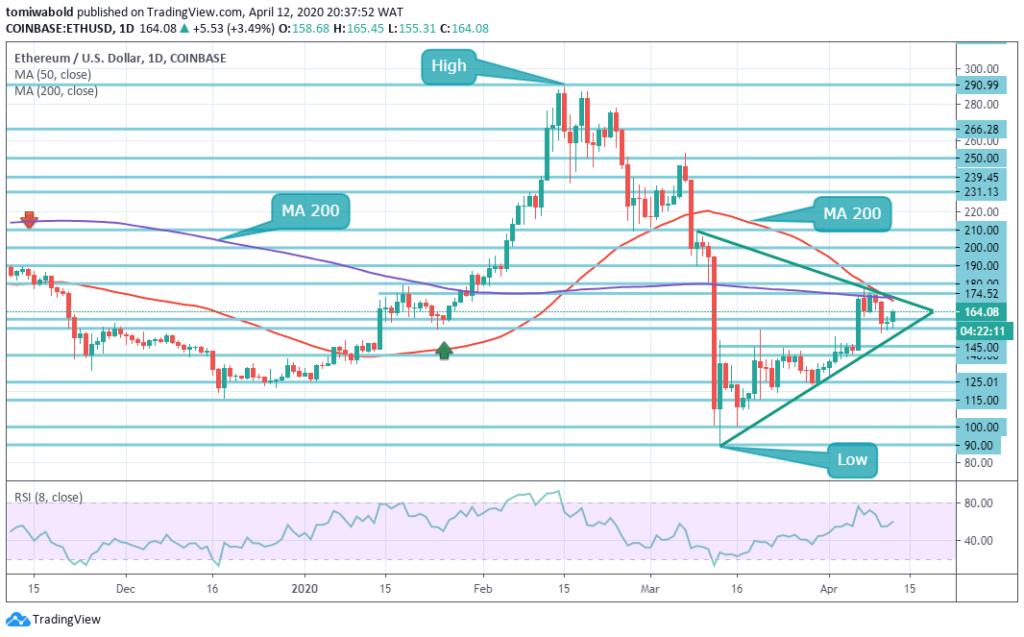 Su Zhu, CEO of Three Arrows in an April 10 tweet noted the huge ETH buy wall on Bitfinex, with interval levels between $159 and $162 recording a whopping 250,000 ETH worth of bid orders, these bids are valued at around $40 million. This is also reflected in Bitfinex’s margin market stats.

Another trader noted that 1.8% of ETH total circulating supply is at present on Bitfinex margin longs citing the fact that an increase of bids worth 250,000 ETH has been seen in the last four hours.

Another news rocking the Ethereum community is that Reddit, a social media forum with huge followership would be using Ethereum-linked ERC-20 tokens as “Community Points” to be integrated with a beta-based Reddit newest feature. Although not so many details have been given about this, Reddit spokeswoman was quoted to have given a hint in a Decrypt commentaire. Reddit already has its own “karma” system, but the inclusion of cryptocurrency would certainly bring in a breath of fresh air.

Ethereum’s price activity since its inception has a similitude to Bitcoin’s price activity when it grew exponentially from $500 to its all-time high of $20,000. A rally may be inevitable if Ethereum follows Bitcoin to the letter T, as Bitcoin miners gear up for halving which is believed to be a catalyst for a massive price hike.

This is lending credence to a call for an attention shift to Altcoins as stated by a prominent analyst as a notable trader had earlier remarked that Ethereum may be one of the best investments for this year.

Start the Journey to Millionaire Status via Bitcoin Loophole

Start the Journey to Millionaire Status via Bitcoin Loophole