US Exchange to charge almost $7 for Bitcoin withdrawals.

Kraken, a US based exchange has now announced that it will now cost $6.75 for Bitcoin withdrawals.

A circular was published in which a raise in withdrawal fees was mentioned.

“Kraken always pays a miner fee that is sufficient to ensure transactions are processed quickly”, it was mentioned.

“However, the average miner fee required to prioritize and confirm Bitcoin transactions has been increasing for some time without a corresponding increase in the fee we charge to clients.”

The new withdrawal fee will be a fixed 0.0025 BTC per transaction, currently equivalent to around $6.75. 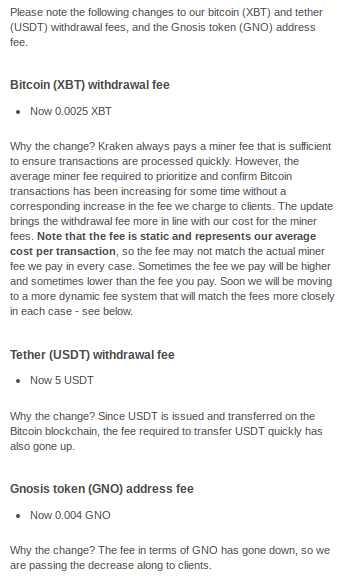 Why the fees has been increased?

The move has been made due to the increased cost from a combination of increasing miner’s  fees and increased transaction numbers as a wave of new adopters come on board.

Along with Bitcoin, the withdrawal fee for USDT tokens  has also increased.

Users are now  suggesting trading and withdrawing other coins with lower fees like Ethereum (ETH) and even Dogecoin, which has fees of around one cent.

Bitcoins, from Risky to Safe Investment.