As the Bitcoin price is increasing day by day, so is the number of hacks and security threats. It is always suggested to store your bitcoins in bitcoin hardware wallets and never on cryptocurrency exchanges. Bitcoins worth millions of dollars have already been stolen from these exchange by hacking.

The biggest example is of Mt. Gox Bitcoin Exchange.

Mt. Gox was a bitcoin exchange based in Shibuya, Tokyo, Japan which was Launched in July 2010. By 2013 and into 2014 it was handling over 70% of all bitcoin transactions worldwide, as the largest bitcoin intermediary and the world’s leading bitcoin exchange.

But in February 2014, Mt.Gox suspended trading, closed it’s website and bitcoin exchange services and filed for bankruptcy. Why?

Mt. Gox announced that approximately 850,000 bitcoins belonging to customers and the company were missing and likely stolen, an amount valued at more than $450 million at the time. Although 200,000 bitcoins have since been “found”, the reason(s) for the disappearance—theft, fraud, mismanagement, or a combination of these—were initially unclear. This is the reason why it is never advised to store your Bitcoins on Cryptocurrency Exchanges.

Although storing bitcoin in Software Wallets like Desktop Bitcoin Wallets or Mobile Bitcoin Wallets can be a solution to above problem, still it is not suggested for those who wish for Long-Term HODL!!!

In case you are not sure how to protect your valuable bitcoins and other altcoins, I suggest you to read this detailed article about “How To Protect Your Cryptocurrencies” which will explain you the following terms:

What is a Bitcoin Hardware Wallet?

NOTE: The private key and recovery phase should never be shared with anyone, until and unless you trust them.

This recovery phase is not stored by the company on it’s servers and hence, the user has full control of it’s bitcoins or altcoins. It is impossible to hack the device without the recovery phase or private key.

While doing  intensive research and studying the reviews of every bitcoin hardware wallet device, I have prepared a list of Top 3 Best Bitcoin Hardware Wallets which are perfect to store your valuable Bitcoins and other cryptocurrencies as well. Lets start from bottom to top. 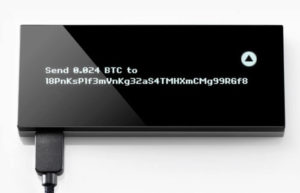 Keep Key wallet is a major hardware wallet. The private keys are generated using its exceptional hardware-based random number generator, combined with the randomness provided by your computer. It also has a larger display to give you clarity on every digital asset on the device.There’s also the ability to exchange between cryptocurrencies directly from the device using Shapeshift.

KeepKey wallet has been tested on Windows, Mac, and Linux. The Chrome app is also available on each of these platforms.

At the time of publishing this article, Keep Key supports storage of following cryptocurrencies:

The KeepKey Hardware Wallet also has the OLED Display & Buttons

Keep Key is available on Amazon. 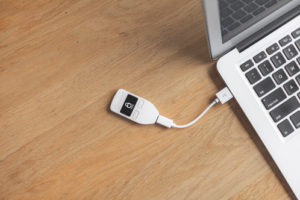 Trezor is a tiny computer, which is like a pendrive that generates Private keys offline. Created by SatoshiLabs Trezor claims to br “the original and most secure hardware wallet”.Trezor has a screen built-in to show seeds and to copy down the data during backup. Because it is an offline wallet, Trezor offers extra security as the seed isn’t displayed. Bitcoin users can add an additional passphrase to the 24-word security to provide extra security to your crypto. In case you forget your passphrase, they have a well-designed and secured process to recover it.

Water-resistant and sturdy, the Trezor features a small display for confirming transaction details, 2FA, password manager, and a variety of other features.

Windows, Linux, OS X (10.8 or higher). You can also use your TREZOR with Android devices which have USB On-The-Go (aka USB Host) and with apps such as TREZOR Wallet, Mycelium, and Multibit HD.

At the time of publishing this article, Trezor supported the storage of following cryptocurrencies:

The Trezor Hardware Wallet also has the OLED Display & Buttons

Trezor is available on Amazon. 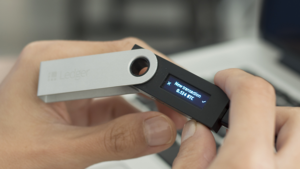 The Ledger Nano is a solid multi-cryptocurrency hardware wallet for storing cryptocurrencies. It is built with a unique operating system called BOLOS, which is integrated into the secure chip on Ledger Wallets line. The device uses a small OLED display and side buttons that are pushed to confirm transactions. It securely hosts applications and data. Fido 2YF in Ledger Nano provides a secure factor authentication to users including Dropbox, Facebook, Google and online merchants.

Besides, the device has unlimited capacity; basically means you can add and remove apps without losing coins.

The company also makes the Ledger Blue, an enterprise-grade hardware device, which has a larger screen, added security features.

At the time of publishing this article, Ledger Nano S supported following cryptocurrencies:

The Ledger Hardware Wallet also has the OLED Display & Buttons. Ledger is available on Amazon.

Bitlox, looks totally different from the above mentioned hardware wallets.Also,instead of connecting Bitlox to laptop via USB, it gets connected with Bluetooth only. The wafer thin device, resembles like a smart card.

At the time of publishing this article, Bitlox supported storage of only Bitcoin. Though it has mentioned on it’s website to add Ether and other Altcoins soon.

The price of Bitlox hardware wallet at the time of publishing this article was $100.

Japan's Peach Airlines Clarifies It Will Accept Bitcoin As Payments

Japan's Peach Airlines Clarifies It Will Accept Bitcoin As Payments