The cryptocurrency market is generally in green, and so is Litecoin. BTC’s sharp rally to a $24,200 high seems to have put a bid under Litecoin. Litecoin (LTC) surged from the $78 support on Dec. 16 and followed up with another strong move on Dec. 17. This move pushed the price past the $100 psychological level. The fifth-largest cryptocurrency has since been on the move as a bullish leg on LTC/USD extends past $120. Litecoin is on fire, recording four straight days of bullish action. At the time of writing, LTC is exchanging hands at $121.98, up by 12.88% in the last 24 hours to set intraday highs of $122.64. Litecoin ranks among the top weekly gainers at a 57.05% increase. LTC’s present market cap stands at $7.95 billion with a 24-hour trading volume of $9.34 billion. Litecoin has hit its highest price since 2019 halving as it traded above $100. On 5th August 2019, Litecoin (LTC) had its second halving, which saw its block reward halved from 25 LTCs to 12.5 LTCs. At a speed of 2.5 minutes per block produced, halving occurs every 840,000th block or every 4 years. 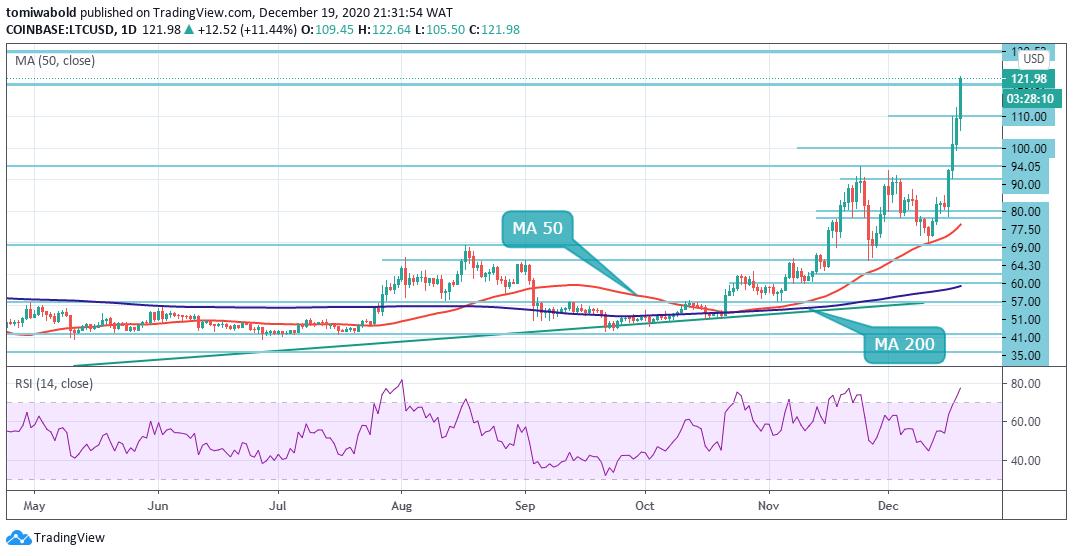 A bullish formation on LTC/USD daily chart occurred after Litecoin spiked past the $94 resistance. On the upside, the path ahead of LTC seems to be relatively smooth however LTC may face some resistance at $130. Once this hurdle is out of the way and demand for LTC builds, a breakout with a $140 target may soon appear.

On the flip side, if exhaustion sets in on the part of the bulls and volume dwindle, the LTC/USD pair may retest the first major support level at $100. Increased selling pressure may cause LTC to correct to $94. LTC may need to refresh support at the $90 level to prevent further downside. If the price breaks below $90, the pair could drop to $80.

LTC is in bulls’ territory, the upsloping moving averages and the RSI towards 80 indicate bulls have the present advantage. A further push by the bulls may cause the $130 and $140 levels to come to bare. On the flip side, if the advantage shifts in favor of the bears, a price close below $110 may cause the LTC price to correct under $100.

Where Will Bitcoin (BTC) Proceed in 2021? Here Is What to Expect on Bitcoin Cash, Litecoin, and Dogecoin

Bitcoin (BTC) Reaches $24,200, More to Expect? Here Are Two Key Trends to Watch Out For

Bitcoin (BTC) Reaches $24,200, More to Expect? Here Are Two Key Trends to Watch Out For