The first and largest cryptocurrency by market cap, Bitcoin (BTC) in a bullish move that kickstarted in the prior week hit recent highs of $11,736. In a move that saw Bitcoin recording five straight days of bullish action, Bitcoin breached the $11,000 key level, to trade past the other two key resistance levels of $11,200 and $11,500 hitting $11,700 in the process. As Bitcoin’s path to $13k remains congested, Bitcoin subsequently faced several rejections.

Its recent rejection at $11,700 spurred different reactions in the market. It was consequently noted that the level of uncertainty in the market rose slightly. Analysts and traders alike have voiced out what matters on Bitcoin’s path to $13k.

Recent findings from eToro, a major multi-asset brokerage have revealed the biggest factor behind cryptocurrency rallies. In a recent crypto market quarterly report titled “What Moves the Prices of Cryptoassets,” the brokerage platform listed 15 factors that caused most crypto assets to rally.

eToro, the brokerage platform listed 15 factors which caused most crypto assets to rally, among the factors listed are mergers, funding, halving, partnerships, staking, and announcements. It was consequently noted that mergers and acquisitions remain the biggest factor behind near term explosive crypto rallies. Halving, funding, partnerships, and staking stay behind acquisitions in daily, hourly and weekly performance.

eToro researchers also found that mergers and acquisitions lead up to 90% chances of a positive return throughout the week. 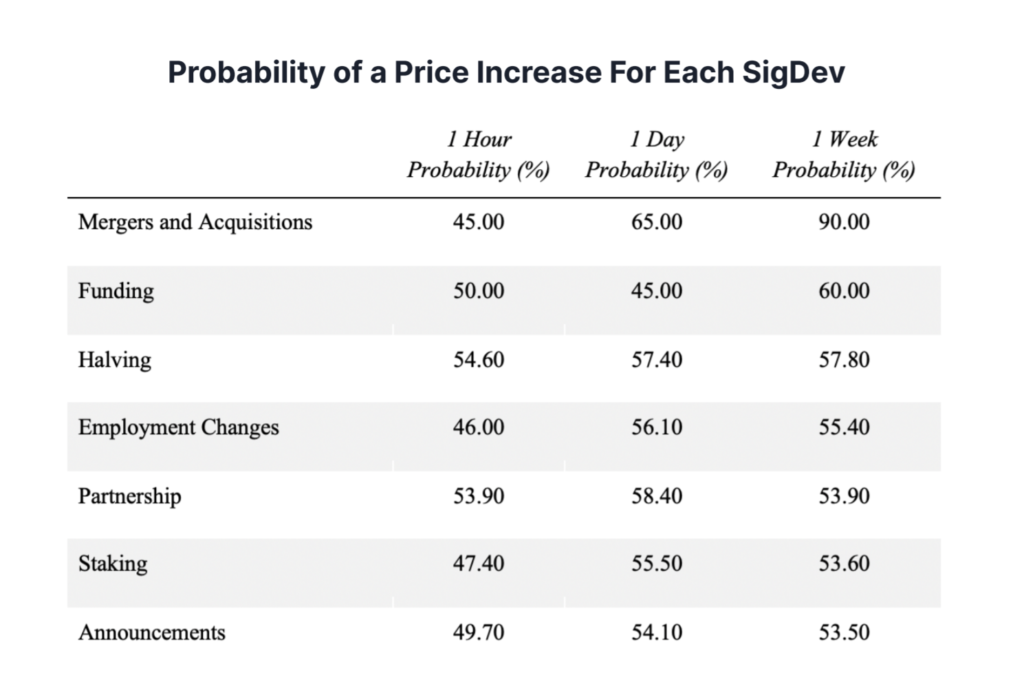 The probability of a crypto asset’s price surge after a significant development. Courtesy: eToro

In a further probe, eToro and The Tie discovered through recent data that most crypto assets typically rise the most over a week after any type of announcement is made. It noticed this price increase trend after an announcement is made: 1hour >0.5%, 1 day> 0.8% to 1.3%, then 1 week, 2% to 8.2%.

The platform stated that its recent findings might be most useful for institutional investors and professional traders, over retail investors. It also noted the importance of related parties or companies ensuring that any relevant data does not leak to prevent market manipulation.

What Matters on Bitcoin (BTC) Path to $13K

In the near term, traders believe the Bitcoin price trend will be largely determined by how it behaves at the $11,200 to $11,325 support region. Due to a weakening technical momentum of BTC, traders generally see a bigger support region from $10,500 to $11,000.

Michael van de Poppe a trader, sees a healthy ongoing trend in the larger crypto market due to a healthy aggregate market cap. He stated that BTC could see a drop to the $10,600 to $10,900.

Edward Morra, an analyst, opined that BTC may experience a pullback to the $11,100 level, noting that BTC hit an important “daily supply” level when it rallied to $11,700. A pseudonymous trader “Bitcoin Jack,” opined that while the present trend is not bearish, it’s not primed for a continuation either.

Gold, inflation, and negative interest rates with the post-halving cycle of Bitcoin as it enters 2021 may also matter on Bitcoin’s path to $13k.