Ripple (XRP) Poised for a Fresh Move As Bears and Bulls Tussle, Where Could It Be Headed Next?

On the Ripple website, it states specifically ‘XRP is a digital asset built for payments. It is the native digital asset on the XRP Ledger—an open-source, permissionless, and decentralized blockchain technology that can settle transactions in 3-5 seconds’.

In the news recently, a senior executive at Ripple stated that XRP has carved out a niche for itself by not competing with Stablecoins and CBDCs but rather complementary to their growth. Emi Yoshikawa, Ripple exec stated that XRP should be considered as a “bridge asset” in international settlement. This remark came following XRP and Tether (USDT), a Stablecoin, jostling for third place by market cap.

XRP has been trading in tandem with Bitcoin in the last few days which led to bears and bulls grappling as Bitcoin consolidates around mid $11,000. 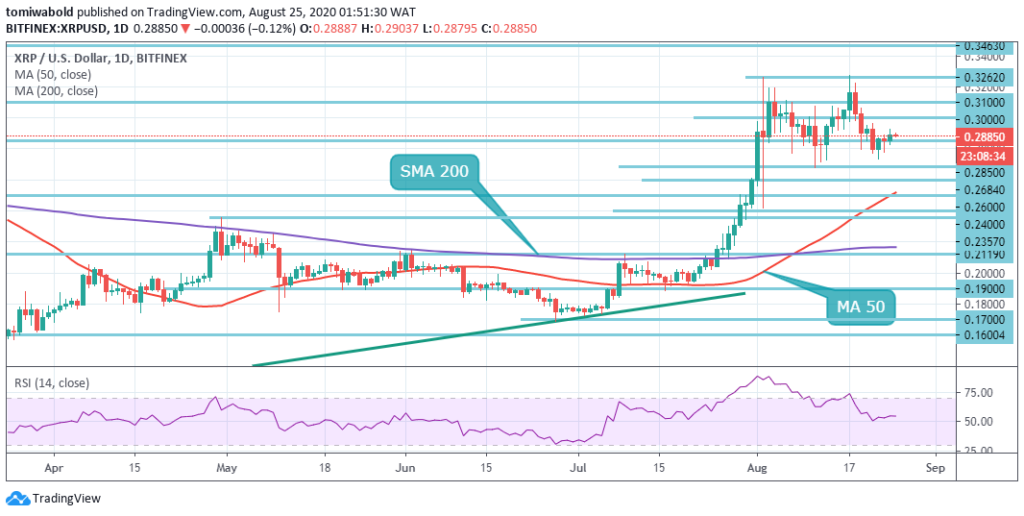 After trading as low as $0.2734 in the prior sessions, Ripple (XRP) seems poised for a fresh move as it initiated a steady recovery.

XRP Price Prediction: Where Could It Be Headed Next?

On a general view, XRP is presently caught within range trading between $0.3262 and $0.2684 as bears and bulls tussle, XRP seems to have reached equilibrium as indicated by the RSI as being just above the midpoint. This suggests a balance between demand and supply.

However, if XRP is rejected at $0.3262, it will extend its stay inside the range for a few more days.

The advantage will shift in favor of the bears if the XRP/USD pair breaks below the $0.2684 support. If this level cracks, a drop to $0.24 is likely.

Although XRP is presently trading beneath the $0.30 psychological level, a technical analyst maintains that XRP is still bullish. He is predicting a 100% increase which implies XRP doubling its recent price to reach almost $0.50.

Another analyst stated that although XRP is presently consolidating around a key horizontal level after setting highs of $0.32 earlier, it remains poised to surge towards $0.475 in the coming weeks. He however isn’t oblivious of the current weakness the asset may be depicting.

Top analyst at Blockfyre, shares the same school of thought, opining that as XRP consolidates around this key level traced back to the last 3 yrs, $0.475 is in sight.

He sees that in the long-term, XRP will finally hit $1 being bolstered by macro price patterns play. This he earlier stated;

“You despise money if you don’t own XRP. The maximum point of financial opportunity is right at these levels. Reclaimed the area where the 17? the bull run had kicked off after a deviation below a year-long support range. A massive bull flag. Think Midterm (2-3 months).”

This bullish scenario is partly based on Bitcoin price action which is believed to lead up the trail of Altcoins trend although XRP could stage an independent rally if Bitcoin took the downtrend, its chances of doubling will be extremely slim.

The good news is that analysts maintain that BTC remains bullish in a medium-term time frame.

98% of All Crypto Trading Volume Could Be Wash Trading - Report

98% of All Crypto Trading Volume Could Be Wash Trading - Report