by Bhushan Akolkar
in News
0

The shell life for actually utility of smartphone stands at an average of two years before they are being replaced by new handsets with more powerful hardware. However, Samsung who tends to release a new flagship handset every year has found a creative new way to put the old smartphones at work. Under its new ‘upcycling’ initiative, Samsung has found a way to build a Bitcoin mining rig using its old handsets.

Such a project has been brought to life by the sharp engineering minds from Samsung’s Research wing – C Labs. Under this ‘Upcycling’ program the company has turned 40 Galaxy S5’s into a Bitcoin Mining Rig.

With Bitcoin mining gaining increasing popularity in the recent times, miners at putting high-end dedicated computing units at work that keep’s up the transactions conducted within the Bitcoin’s blockchain. However, the team at Samsung’s C-Lab has recently demonstrated that using eight Samsung Galaxy S5’s, users can mine with even more superior efficiency in comparison to a standard desktop PC. 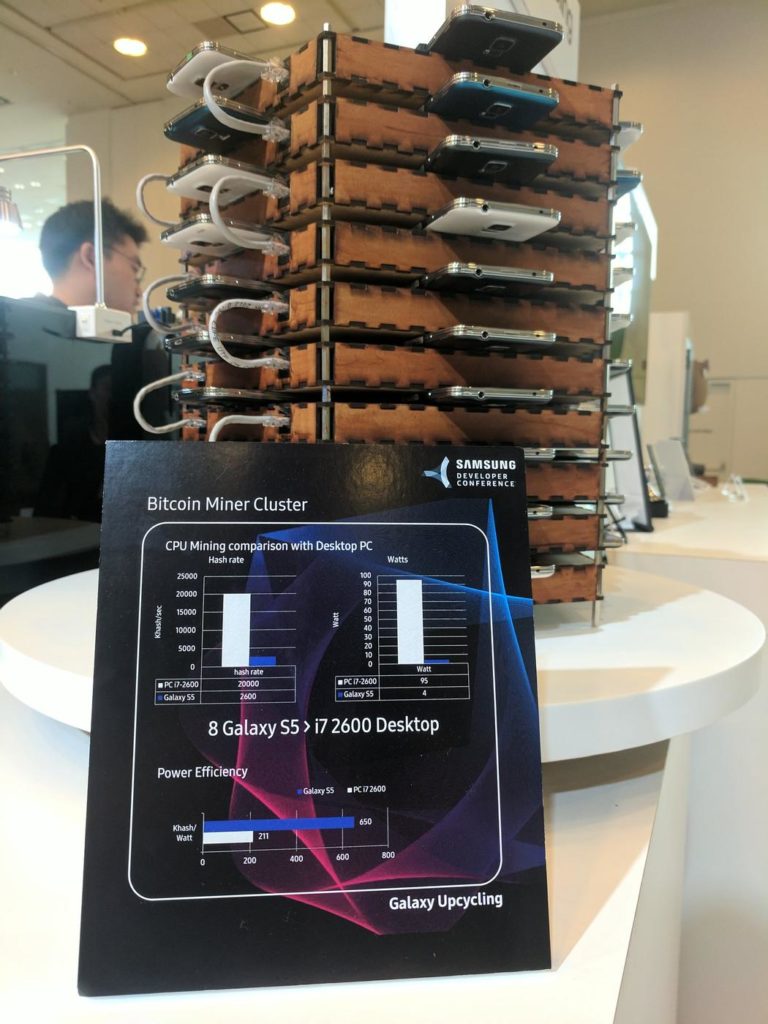 However, the technical details regarding this program are sparsely available, the mining rig was unveiled at the Samsung Developer Conference held in San Francisco, in addition to several other projects that showed potential use of older smartphone hardware for different utilities.

Samsung says that it will soon showcase the Upcycling’ project online and free to the public. It will also release the software that allowed Samsung’s C-Lab to unlock and repurpose its old handsets. Robin Schultz, Samsung spokesperson told motherboard that “This innovative platform provides an environmentally responsible way for old Galaxy mobile devices to breathe new life, providing new possibilities and potential extended value for devices that might otherwise be forgotten in desk drawers or discarded.”

CEO of iFixit, Kyle Weins has all praises for the ‘upcycling’ project saying “what [Samsung] built is a layer between the hardware and you being able to install anything you want on it. It’s a step lower than jailbreaking, it’s removing Android entirely.”

Weiss has appreciated Samsung’s efforts and initiative around “the challenge with keeping old electronics running a long time is software, with phones in particular, the old software is insecure and doesn’t run the new apps. So the question is, if you have this perfectly functional piece of hardware that doesn’t have good software anymore and you want to keep it running for ten years, how do you do that?”

Weiss stated that Samsung’s ‘Upcycling’ project gives a new life to old handsets creating a potential secondary market of outdated handsets. “[Samsung] wants to maintain the value of their devices long term. If they know they’re going to justify a new price of a thousand dollars for a new Note, it’s easier to get people to spend that thousand dollars if they can resell it for five hundred.”

KryptoMoney.com publishes latest news and updates about Cryptocurrencies, Bitcoin and Blockchain Technology. Subscribe to our newsletters and join our Telegram Channel to stay updated.

Tone Vays Says Bitcoin May Not Plunge Below $3,700