Stellar (XLM) Holds On to 120% Gains, Bitcoin and Altcoins Recovery Kicks Off but Its Time to Pay Attention

On November 26th, the cryptocurrency market saw a massive short-term correction. The first and largest cryptocurrency, Bitcoin fell to lows of $16,200 while Ethereum (ETH) bottomed at $485. Other Altcoins fell during the carnage as the entire market terrain was swept with paint of red.

Cryptomarket Recovery Kicks Off but Its Time to Pay Attention

For most of the day, Bitcoin remained above $17,000 and peaked at $17,789 showing signs that BTC is gradually regaining its momentum.

Still, some traders are not ruling out the possibility of BTC plunging lower. A pseudonymous trader “Wolf” said BTC weekly chart is showing signs of overextension which could cause a retest of the $13,000 region. Another trader with the moniker “Crypto Capo” stated that he sees a scenario playing out where BTC rises to $18,000 then falls to the $13,000 region.

However some analysts think that following such a major correction, some consolidation is to be expected as price searches for stability.

One positive trend is that buyers have been aggressively defending the $16,411 support area, which is marked by whale clusters. This shows that there is sufficient buyer demand in the market to prevent a broader pullback, at least in the short term. 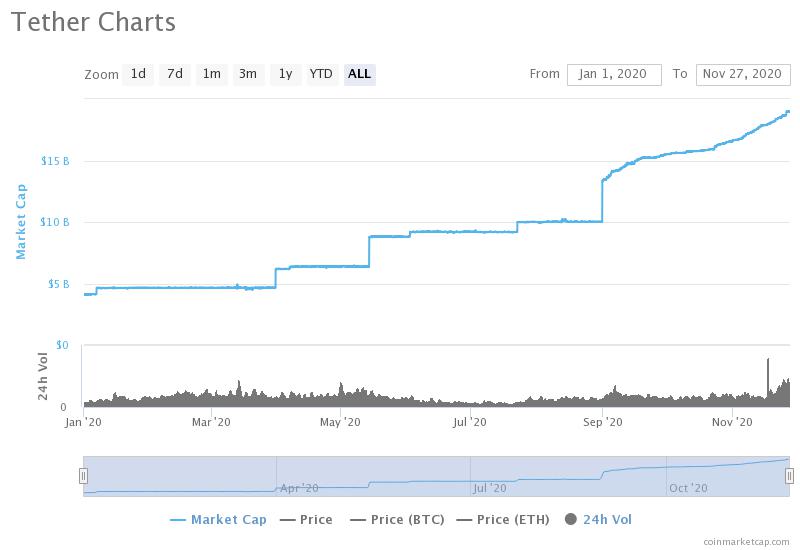 In all these predictions, analysts say that one key variable to pay attention to is Stablecoin inflows which could offset the selling pressure induced by whales. Tether (USDT) and other Stablecoins offer fiat onramps to cryptocurrency markets, thereby minimizing price volatility and ensuring easy redeemability once digital assets are sold.

CryptoQuant recently stated that the number of Stablecoins deposited into exchanges surged in the last few months which has potentially helped to drive Bitcoin (BTC) price to near all-time highs.

For the Bitcoin rally to continue in the near term, there would need to be a higher Stablecoin inflow in the next several days, which would indicate that sidelined capital is returning to the market.

Paolo Ardoino, Bitfinex CTO recently stated that the supply of Tether (USDT) increased by 1 billion in recent nine days, marking the 2nd fastest expansion in its history. Tether’s market cap was noted to have increased by nearly four times since the start of 2020.

IOTA Price Analysis: IOT/USD Prepares for a Push Past $0.35 on the Anticipated Chrysalis Phase 2 Launch