Despite the Tezos Retreat From Its ATH, the Bulls’ Dominance Is Relatively High

Tezos seems to be unaffected by the recent tide blowing in the crypto market as most of the cryptocurrencies are on a bearish turn. However, in the last 48 hours, Tezos price shot up by 8.87%.

The ongoing volatility recorded in the last 24 hours in the crypto markets erased all the gains accumulated days before. Market capitalization shrunk by $20 billion as the bears took a hold of the market while major cryptocurrencies like Bitcoin, Ethereum and Ripple suffered major losses. BCH, EOS and Ethereum tokens recorded dwindling losses.

Tezos, 10th cryptocurrency by market cap operates on a decentralized computing platform. Its attributes are proof of stake consensus, formal verification and the capacity to allow stakeholders to vote on changes to the protocol, self-amending in a way.

It operates in similitude to Ethereum since both host dApps created using smart contracts.

Strong Bullish sentiments had rent the market on Tuesday, and on Wednesday evening, the crypto asset slid from its ATH of $3.95 (Fib swing high).

The crypto asset held the support offered by the moving average 5 and 13 on the daily chart and the long term bullish outlook. The bears from the market could not flip its support; it rather broke the resistance at $3.80 to trade upwards. However, the bulls could not overcome the resistance at $3.95 as it later corrected slightly to $3.62 which it stands at the moment. 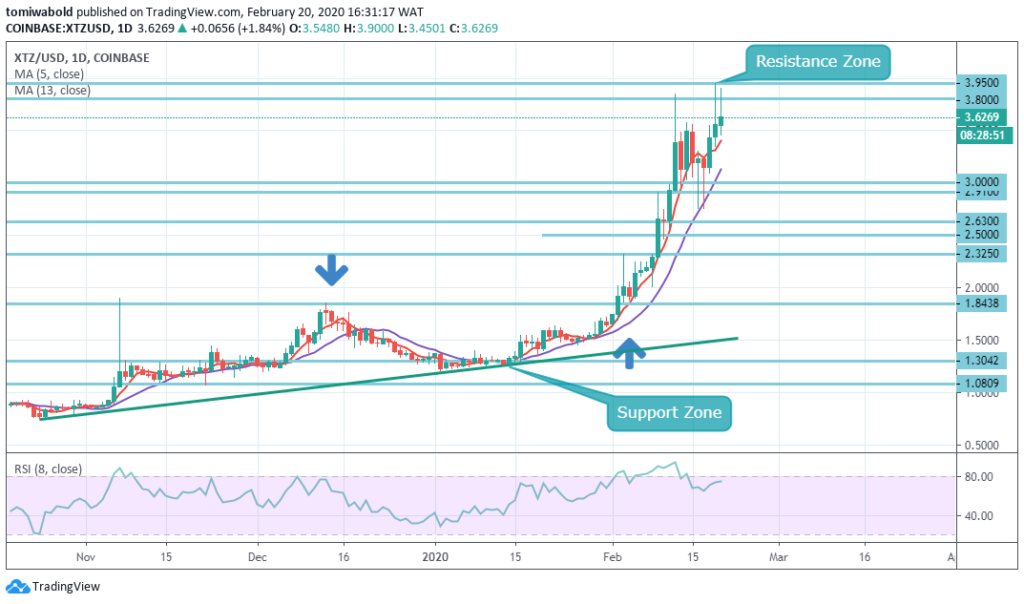 At the time of writing, Tezos stands at $3.62 while it tops the chart of gainers. The cryptocurrency had gained nearly 15% in the last two days to reach an ATH of $3.95 before retracing back to its recent price.

Despite the Tezos retreat from its ATH, the bulls’ dominance is relatively high. There is an emerging bullish formation to be seen in the recent and the trading session afterward on the moving average 5 and 13 upside intersection. Furthermore, the large gap the moving average 5 is creating above the moving average 13 indicates that the crypto asset may remain in the bullish zone for quite longer.