The Rise of Bitcoin in India

Bitcoin, the world’s first decentralized crypto currency is also the largest and top cryptocurrency. The popularity of Bitcoins is increasing day by day world wide and mass adoption is increasing Bitcoin’s prices.

Bitcoin witnessed a boom globally and in India after the demonetization of Rs 500 and Rs1000 currency notes last year in November. People shifted to Bitcoins as it is a digital currency and can be stored very easily. Post demonetization, Bitcoin prices are continuously rising.

People of India are gaining more interest in Bitcoins and other digital currencies. Thanks to the flagship programme ” DIGITAL INDIA” launched by our Honorable Prime Minister Shri Narendra Modi, India is on the verge to become a digital economy and adopt cashless transactions. The people of India are looking for digital payment options and looks like Bitcoin has got the eye of Indians.

Recently, Zebpay, one of the India’s leading Bitcoin exchange had , touched a major milestone of 500,000 mobile application downloads in it’s Android Platform. The company announced it by uploading an image of a screenshot showing 5,00,000 downloads in Google play store. 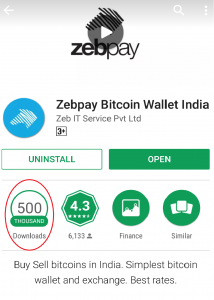 This means 5,00,000 people in India are already involved in Bitcoin activites. Plus, the app is also available in IOS which also have a significant userbase.

Similarly, Unocoin, also one of the India’s largest mobile exchange has around 50,000 users on it’s android application.

Bitcoin interest amongst Indian people is on boom. More and more people are getting aware about Bitcoins.  KryptoMoney.com being an Indian website posting latest updates/articles about Bitcoin and Blockchain aims to educate people about Bitcoins and other crypto currencies.

Recently, KryptoMoney.com partnered up with ASSOCHAM, India’s largest Business Chamber in marketing their event related to Bitcoin. ASSOCHAM organized a Global Summit about Bitcoin and Blockchain in the month of March in New Delhi,India.

One interesting case study came in after Zebpay reached the significant 5,00,000 user base.  India is the 13th largest Bitcoin exchange market in the world. On the other hand Korea, is the Fourth largest Bitcoin Exchange market. But an exciting fact that was recently noticed was Zebpay has more number of users than the combined number of Korea’s three largest mobile exchange.

When compared with Zebpay, it is just 20 percent of what Zebpay has.

This fact clearly indicates that though the trading volume of Bitcoin in India may be low, but clearly India has more number of interested users in Bitcoin.

It also means that India could be a significant player in Global Bitcoin market in coming time. At present people in India are confused about the legality and regulation of Bitcoins. Government has been approached severally for this issue and the Indian government has set up a committee to review virtual currencies like Bitcoin. The committee is supposed to give it’s results to government in June and then the Government may take appropriate action.

Untill now, it is likely that Indian Government may recognize and legalize Bitcoin and other virtual currencies.

If this happens, India may enter in top Bitcoin exchanges markets . Bitcoin prices will surely rise and this would be attributed to Indian participation.

What happened to Bitcoin prices after it got legalized in Japan on April 1 may again happen in India legalizes too.