24 hours after its launch, the Yam protocol gained prominence in the DeFi sector as the second purely decentralized DeFi project after Yearn Finance. This offered YAM holders the opportunity to govern the protocol while allowing users to stake various cryptocurrencies to earn YAM.

Due to its decentralized structure, its unique staking model enabled the YAM protocol to distribute YAM tokens transparently. Its popularity soared as CEO of BitMEX, Arthur Hayes commented in a tweet referring to it.

Following its launch hype, YAM saw a massive influx of funds that within 24 hours, nearly $500 million was locked in the YAM protocol.

In a twist of tales, on Aug.13, co-founder of YAM, Brock Elmore stated in a tweet that the protocol had a bug within the rebase supply feature which crippled the governance system of the protocol. Within minutes as the news filtered, the market capitalization of YAM fell by 90% while YAM token price fell concurrently to nearly zero. 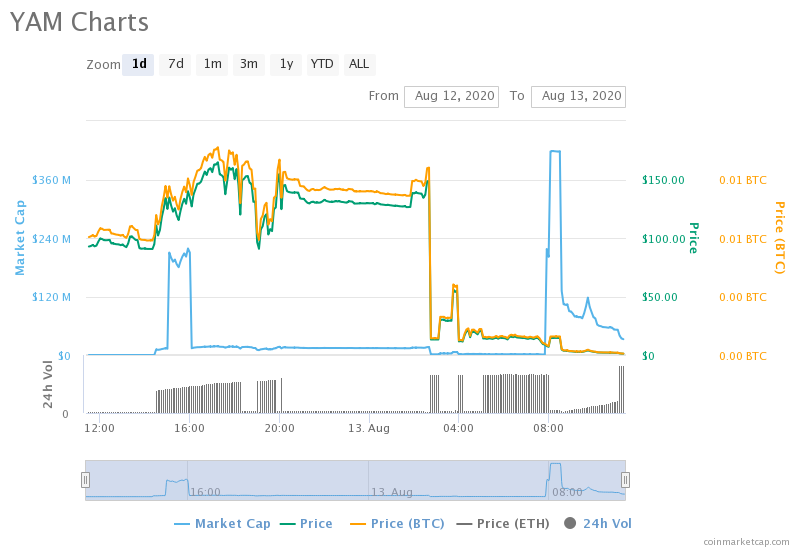 The Cause of the Plunge

A bug in the hastily-developed contracts for Yam Finance resulted in governance contracts being “permanently broken” and $750,000 worth of Curve tokens locked from use.

The project had earlier stated in a blog post that Yam is an “experimental protocol mashing up some of the most exciting innovations in programmable money and governance.”

Despite the hype which surrounded its launch, on social media and crypto-centric forums, commentators remained very skeptical of the Yam Finance project since the code has not been audited.

The Impact of YAM’s Fall, What Next?

YAM’s thundering fall also dragged with it, major DeFi tokens like Compound, Yearn Finance, and Balancer. Earlier, Compound (COMP) had embarked on a breathtaking rally which was halted by YAM’s imbroglio.

This increased the demand for these DeFi cryptos which was succeeded by a rally. COMP/USD surged by more than 35% to set fresh highs of $270 while Aave (LEND), Maker (MKR), Chainlink (LINK), and a host of others took the uptrend.

After YAM’s fall, nearly all the tokens used in YAM staking pools crashed after the event. Chainlink however stood out to set highs of $18.35 today.

Few hours after YAM’s epic fall, its developers stated in a post-rescue attempt that YAM 2.0 is underway. Elmore, YAM co-founder stated his involvement in this attempt will be on the grounds of a professional four-week audit undertaken.

Keep in mind that we may receive commissions when you click our links and make purchases. However, this does not impact our reviews and comparisons. We try our best to keep things fair and balanced, in order to help you make the best choice for you.
Our websites require cookies enabled to provide you with an uninterrupted experience. Please continue without changing your setting to receive important notifications.I Agree