This Is What Analysts Are Saying on Bitcoin (BTC) Price Outlook at $10K, Historical Charts From 2016 Reveal This

Bitcoin Is Presently Consolidating Within the $10,000 Range

Few days into September, the first and largest cryptocurrency, Bitcoin conceded to the bears in a broad-based market sell-off. The shocking sell-off came days after Bitcoin peaked beyond $12,000. Bears’ activity saw Bitcoin plunging from mid $11,000 to trade beneath sub $10,000.

After this bearish price action, Bitcoin regained stability as it is now trading within a narrow range. Bitcoin is presently consolidating within the $10,000 range as buyers gear up to retest the $10,500 key resistance.

The significance of $10,000 is noted as it has served as a psychological level for Bitcoin in the last two years. Heading into Q4 of 2020, analysts remain neutral or bullish on the long term price trend of Bitcoin while a throwback indicates a semblance between BTC price movements seen in 2016 to the current price action. 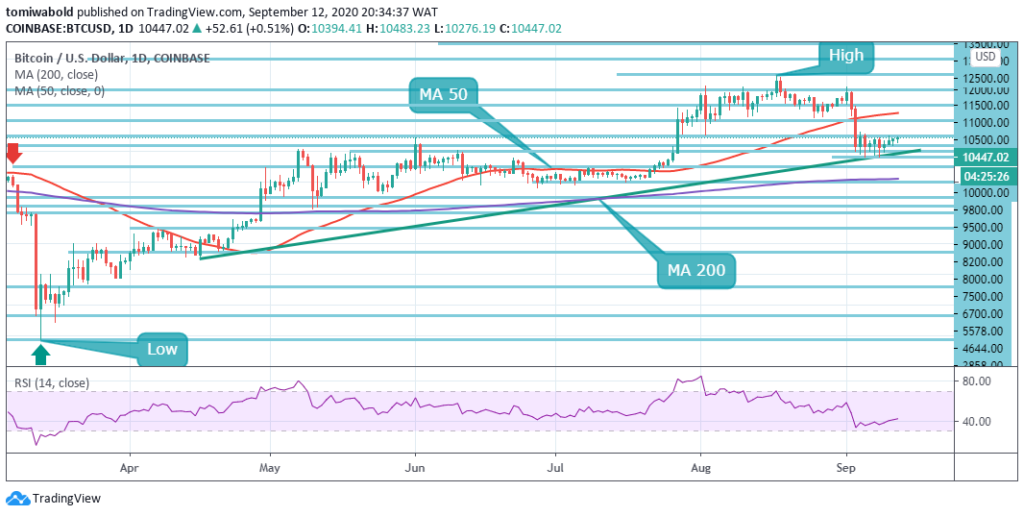 Bitcoin (BTC) is presently consolidating at $10,447 as the entire crypto market awaits its major next move.

In the near term, analysts remain divided on the Bitcoin price trend, while the majority agree to the consensus that BTC price action will slow down.

A trader with the moniker of “Bitcoin Jack” stated Bitcoin could be in a descending wedge that has a 50% chance of breaking out or down. This was re-echoed by others who stated that there are likely chances of BTC falling to as low as $8,800 which was identified as a buy spot for whales. Bitcoin whales have been known to often set BTC tops and bottoms.

Michael van de Poppe of Amsterdam stock exchange believes if Bitcoin consolidates and breaks through $11,800, the price of $16,000 may be reached. Dennis Vinokourov of BeQuant crypto exchange believes that Bitcoin may retest the $12,000 mark soon. Amid all these, historical charts from 2016 reveal a fact which cant be brushed aside.

Historical Charts From 2016 Reveal This

First, the present market structure is resembling only the start and build-up of a potential bull run similar to the sentiment and momentum of late 2016. This was also noticed as an early Bitcoin investor sees parallels between the current price action compared to the calm before the breakout into the last bull market. After BTC halving in 2016, the asset spent an enormous time trading beneath $600 before surging to its ATH of $20k in December 2017. This investor likened the $600 level then to the $10,000 level it is now.

Second, historical facts indicate BTC performed strongly in the last two months of the year. Most notably, BTC surged to a new all-time high in December 2017. This was re-echoed by Guy Hirsch of eToro trading who stated that in previous market cycles, Bitcoin rallied in early November, ahead of key holidays in Asia while citing that a breakout is possible in the near term if the perception of Bitcoin as a hedge against inflation improves.

The bullish sentiment from November to December is also supported by technical factors which include the closure of Bitcoin’s monthly candle above $11,600 for the first time since 2017, and reaching the $12,000 resistance level and also a bullish total market cap of all crypto assets which set a higher high since June 2019.

While also supported by fundamental factors such as strengthening infrastructure, rising inflation, and the near-zero interest rates.