Chainlink (LINK) Is Trading at the Moment at $4.00 Slightly Down by 0.2% Since the Days Start

Not many cryptocurrencies have had a superb grace such as Chainlink (LINK). Ranking 14th presently on Coinmarketcap, the dubbed “Bitcoin challenger” incurred a parabolic uptrend which pushed the crypto from the lows it set during the 2018 bear market to its all-time highs of almost $5 in March 2020, gaining 2300% in the process. This is regarded as one of the strongest performances since the crypto-mania. In 2019, Chainlink (LINK) rounded off the year as best performing asset outranking Bitcoin (BTC) which endeared it the title of the “Bitcoin challenger”, Binance Coin and a host of others.

From then, the decentralized oracle caught on and its popularity soared. 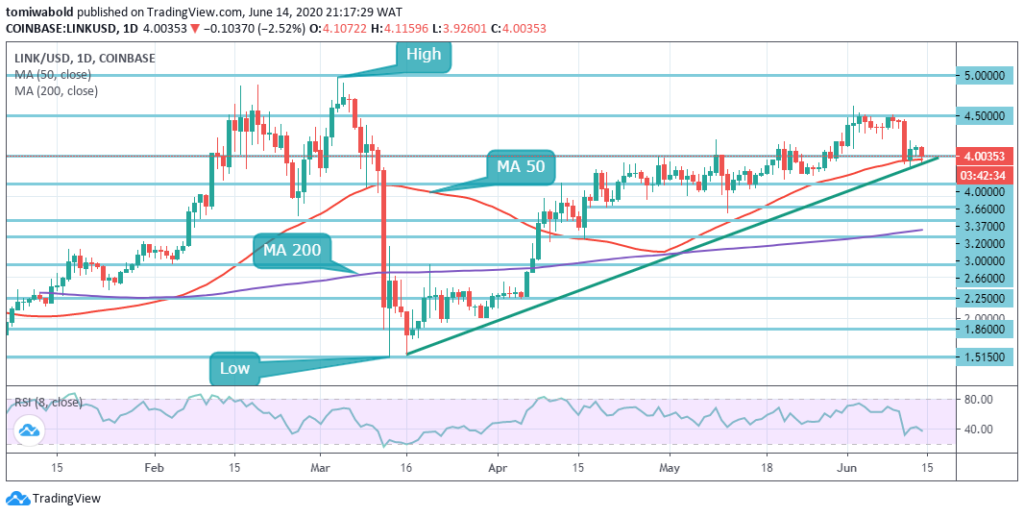 Despite plunging to as low as $0 on some exchanges during the March market carnage, the Altcoin rebounded to almost the same level but setting a lower high extending its bullish momentum.

However, a grim outlook envelopes Chainlink near term momentum as analysts are indicating LINK parabolic uptrend may soon wind up. Chainlink (LINK) is trading at the moment at $4.00 slightly down by 0.2% since the days start.

Analysts are noting that Chainlink (LINK) parabolic uptrend it incurred since 2019 may soon wind up. A prominent analyst states that he expects LINK to experience a price correction in the near-term after which it will proceed to an accumulation range. He opined that LINK will then embark on a massive uptrend after this range.

Another trader who goes with the moniker “Pentoshi” opined that he anticipates a price drop for the decentralized oracle in the days ahead. He gives the range of the price drop to be from its recent price of 0.000433 BTC to as low as 0.000245 BTC. However, other analysts believe that Chainlink’s decline will not be so immediate as it will still climb higher especially in its BTC pair before it concedes to a possible decline.

On the flip side, on-chain data however paints a bullish outlook as Chainlink balance on exchange wallets has reached lows recently. This indicates that investors are taking a long-term approach towards their LINK positions implying that it might not see any heavy selling pressure until LINK gets to significantly higher prices. Also, a notable trend indicating an exodus of investors from exchanges to keeping their tokens in cold storage has been on since 2019. 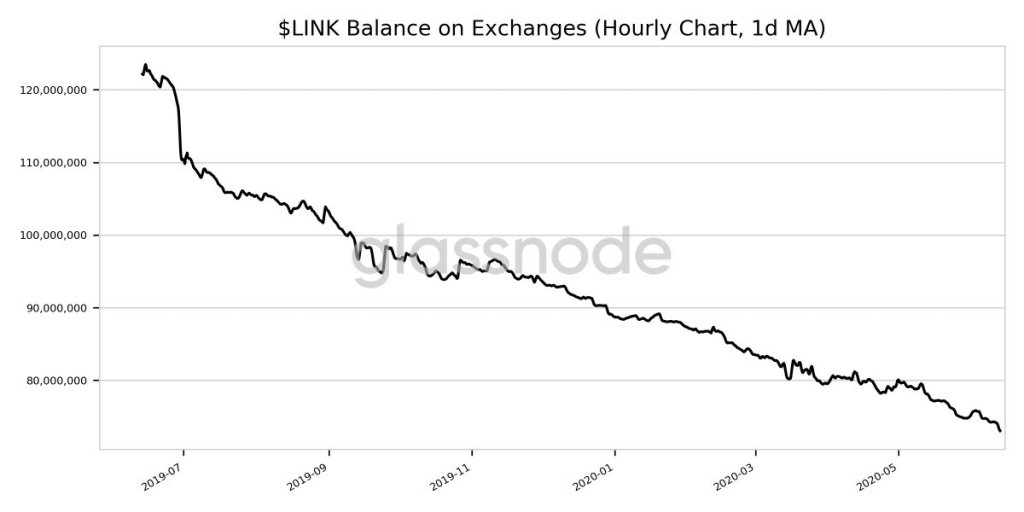 Data Through the Use of Glassnode

This is quite significant as facts show a downtrend in exchange balance depicts the nearing of an accumulation phase which could catalyze a bull run.