Within the thread, Bach N. of Trezor responded, affirming Cashaddr to be in development for Trezor. His response came complete with a Github link, which appeared to confirm the tweet. 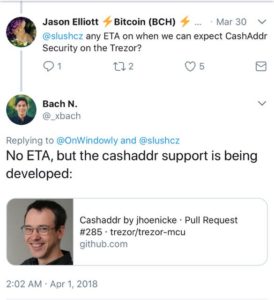 “This needs to be done outside the firmware for cashaddr support. Webwallet: compute cashaddr addresses from xpub. Note that only the last step from hashed public key to address needs to be changed. The webwallet checks that the address the Trezor returns is as expected. This check should also allow 1.. addresses so that it works with older firmware (so we don’t have to deploy both at the same time); allow cashaddr as send to address. The firmware supports both and both use SPENDADDRESS. The only difference is the confirmation message given to the user; the transaction format did not change at all.”

Just prior to the fork creating bitcoin cash, it was Mr. Rusnak who warned through Github,

“Agreed. I have a plan to change theaddress format. Changing the address format is expensive, so I would like to investigate various other option than just changing the prefix before settling on something. I would also have to convince other in the space that this is a good address format,”

Combined with the even more recent acknowledgment and Github activity, bitcoin cash users continue to have reasons to be hopeful about the coin’s future prospects.