TRON (TRX) is a growing platform blockchain, with a native token TRX, that has firmly established a position on the Coinmarketcap table. A majority of Altcoins including Bitcoin is experiencing a positive push in the new week. TRON (TRX) has been increasing with considerable gains from Aug 26 resulting in a sustained impressive uptrend. TRON is one of the leading cryptocurrencies. Whilst it’s not one of the current Top 10 cryptocurrencies it has featured notably in the crypto sphere. The token followed the lead of major Altcoins with a fresh bullish phase on TRX/USD as price rally towards $0.0350. TRON (TRX) price is currently trading at around $0.0347 and has remained bullish over the last 24hrs against USD with an increase of about 18.77%. TRON releases “Meme” Coin, SUN designed as the quintessential Bitcoin equivalent on the TRON network. SUN Genesis mining official date is on September 2, 2020. On September 16, the coin will be officially launched on “SUN Day”. The total supply will be 19,900,730.

*TRON (TRX) has been increasing with considerable gains from Aug 26 resulting in a sustained impressive uptrend
*The token followed the lead of major Altcoins with a fresh bullish phase on TRX/USD as price rally past $0.0350
*TRON releases “Meme” Coin, SUN designed as the quintessential Bitcoin equivalent on the TRON network 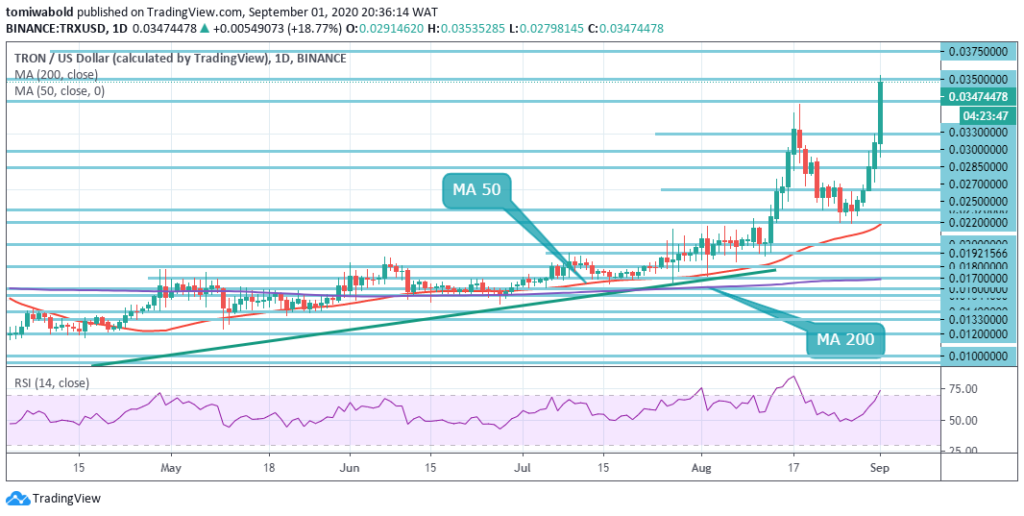 TRON provides an amazing exhibition of strength at the moment that seems to continue unabated towards breaching the $0.0350. The early phase of the uptrend followed a technical breakout beyond the prior high at $0.0327 of Aug 18. The token has been propelled to higher elevations in a way that expels the cluttered sellers in particular regions such as $0.025, $0.027, and $0.0285.

TRX/USD is now in the bullish phase, at over $0.0330 in price. The downside is safeguarded by the horizontal support zone taken to a swing low of $0.022 in between the $0.0327 swing high. Support is being set beyond $0.0300 to give buyers an option to progress their position to the horizontal swing high resistance as well as $0.0350. 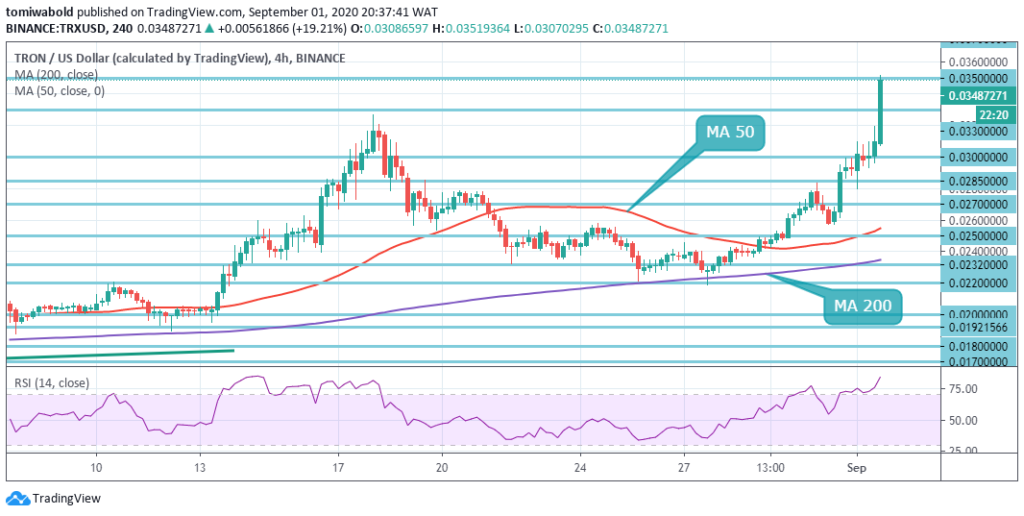 TRON (TRX/USD) lifts higher on the 4-hour time frame from its three consecutive days of bull run, strengthening on a rebound nearby to the 4 hour MA 50. The price is now shown targeting the horizontal level of resistance to accelerate the advance upward at $0.0350. For Tron, technical signals from such indicators as RSI and MA 50, MA 200 are optimistic. This means that TRX may pull further than $0.0350, in the short term.

The RSI holds for now beyond 80 while the MA 50 and MA 200 shift to the positive region. On the flip side, a reversal from the present levels may look for support at the numerous resistance turned support areas such as levels of $0.0285 and $0.0260. On the inability to grow just beyond the horizontal resistance hurdle of $0.0350 the token may reverse to the demand zone of 0.0250.

There Is a Rising Debate on the Stay of Bitcoin (BTC) As ‘King Coin’, This Is What Traders and Analysts Think