Bitcoin (BTC) price hit a new all-time high of $41,986 on January 8. However, Bitcoin corrected sharply after reaching this peak, dropping to a low of $ 30,100 on January 11. The sell-off coincided with significant whale activity across the board.

Bitcoin (BTC) rallied on January 14, reaching $40,127 on Coinbase amid fresh data of huge BTC purchases on exchanges. The new Bitcoin rally also coincides with the Grayscale product opening on January 13th. This seems to buoy the strong argument that BTC’s uptrend is driven by institutions, not retail investors.

Weakening bears reinforce the cautious sentiment towards the US dollar. Shusuke Yamada, Chief currency strategist for Japan at Bank of America in Tokyo, recently spoke about the outlook for the US dollar.

“I am focusing on gradual dollar weakness in 2021.” 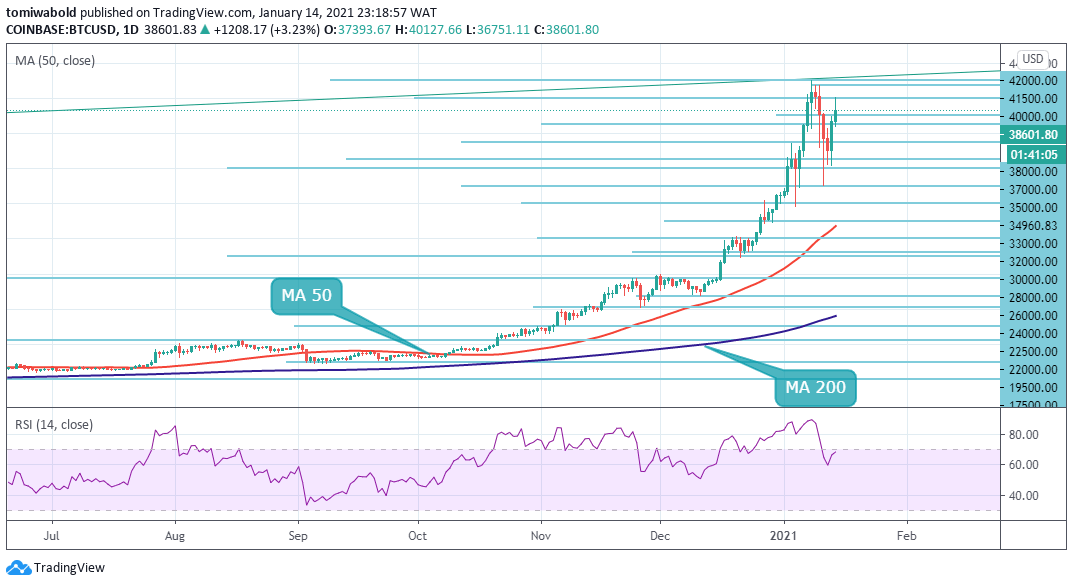 With a weakening dollar in view, 2021 could be an eventful year for the crypto space. Bitcoin trades for $38,601 at the time of writing.

What will 2021 hold for Bitcoin and crypto? Diginex CEO Richard Byworth Stated early this year when Bitcoin (BTC) broke through $35,000:

“We are at the beginning of the bull cycle, 2021 is going to deliver returns that will likely be shocking for some people,”

He further predicted, “Bitcoin will be north of $100k at some point during the year and Alts will most likely follow.”

The founder and CEO of Bitcoin (BTC) investment firm Pantera Capital recently reiterated his previous forecast that Bitcoin could rise to $115,000 by August 2021, surging by 200% in the next eight months. Stating that Bitcoin still has a lot of room to grow.

Bitcoin experienced its third halving in May 2020. Previous attempts to predict when the price of Bitcoin (BTC) will rise after each halving have been inconsistent at best. However, traders have long expected that halving events would catalyze price increases. Historically, Bitcoin has risen 12-15 months after each halving.

Halving events are quite an occurrence in the crypto space, with some crypto assets set to see their issuance rate slashed into half by mid-2021. Examples are Verge (XVG) and Tomochain (TOMO).

Verge (XVG) is set to undergo a halving on Jan. 25 when its chain attains a block height of 4,700,000, the current 200 XVG reward that is issued to Miners every 30 seconds will subsequently be reduced to 100 XVG.

Tomochain’s (TOMO) halving will occur on Feb. 7, when the number of TOMO coins issued annually will be cut from 2 million to 1 million.

In the Tomochain blockchain, the block time is two seconds and every 900 blocks make up an epoch. For each epoch, Miners are given 250 coins at the moment. In February, this figure will be halved to 125 coins.

TomoChain was Launched in 2017 and uses a proof-of-stake consensus mechanism that is compatible with the Ethereum virtual machine. The upcoming halving will be only the second and last in the history of the coin. Afterward, the TOMO issuance rate will remain unchanged until the total supply of coins reaches 100,000,000.