Why Bitcoin Is Plummeting Despite Halving? Analyst Speculates BTC to Remain Sub $10k Quite Longer

BTC halving is the 50% cut of the reward for mining new Bitcoin blocks which occurs once every four years increasing BTC scarcity which ultimately affects its main value proposition. Another Halving is expected to happen in late April. As traders anticipate the upcoming halving, there is a divide of the opinion of the impact of the halving on the crypto market.

Historical facts indicate that the Bitcoin price is likely to plummet before a halving happens. After the halving occurs, a consolidation phase starts, and BTC is likely for a comeback 12 months after. The question is if history can replicate itself. Crypto analyst, Don Alt, holds the school of thought of BTC falling before halving, as he foresees BTC struggling to rally above $10k in the short term as momentum recedes. He opined of the bears being dominant as he maintained that if this action is sustained, BTC might trade sub $10k a little longer. 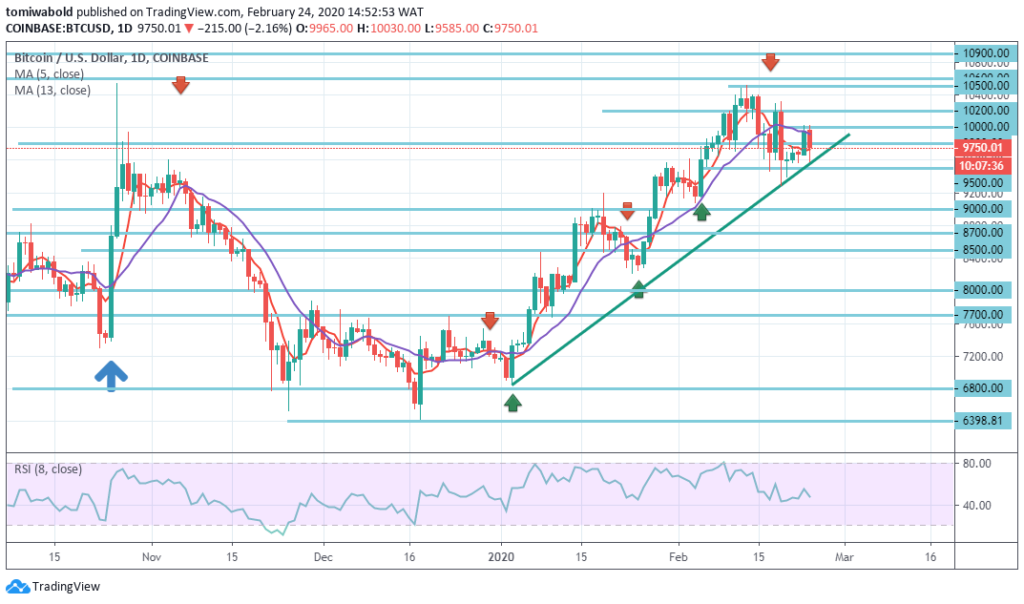 In recent weeks, after BTC’s previous rally and marking a new 2020 high, traders expected BTC price to test higher barrier levels such as $10,900 and $11,500. Upcoming BTC block reward halving had contributed enormously to this positive sentiment. However, after hitting a new 2020 high of $10,500, the Bitcoin price has not gained enough momentum to sustain its bullish trend.

In three futile attempts in the past two weeks, the cryptocurrency experienced a strong rejection at the $10,000 level and on each count, it receded further.

BTC’s previous rally could be linked to margin trading platforms like BitMEX and Binance Futures but when the market required real retail demand to spur it above $10,000 with a push, it did not get enough volume and momentum.

Bitcoin has formed relatively strong support levels in the $8,500 to $8,700 range and at $8,000 in which a comeback is likely however, traders are targeting $7,700 as a medium-term support level.

Josh Rager, a crypto analyst, opined that for Bitcoin bearish trend to be sustained, it needs to plummet below $9,300.

BTC has been in an oscillatory move around the weekly/daily support of $9,580. Breaking above the $9,550s is a positive sign while breaking below the $9,300s may quite reverse the bear bias.