With Ethereum Gearing To Be the “First Cryptocurrency” for Investors, Here Is How To Avoid High ETH Gas Fees

Momentum is building for the second-largest cryptocurrency, Ethereum (ETH). “Flippening Index,” from Blockchain Center which utilizes key metrics to track whether the Ethereum network has exceeded Bitcoin in size and activity indicated that Ethereum is 63.5% of the way to having flipped Bitcoin.

The numbers also allude to this fact. For instance, Ethereum is up by more than 1200% from its March 2020 low while Bitcoin only increased by nearly 700%. Although the market valuation of Bitcoin in comparison with Ethereum is a huge gap, say like 4 times with the difference in spot prices also remaining, certain factors are pointing to the fact that Ethereum is gearing to become the “first cryptocurrency” amongst investors.

Ethereum may be yet to flip Bitcoin’s transaction volume, but the trend of a growing transaction volume is seen with more than $1 trillion ETH transactions recorded in 2020. Ethereum demand among developers is also on the rise being the lead platform for building blockchain projects and launching decentralized applications. 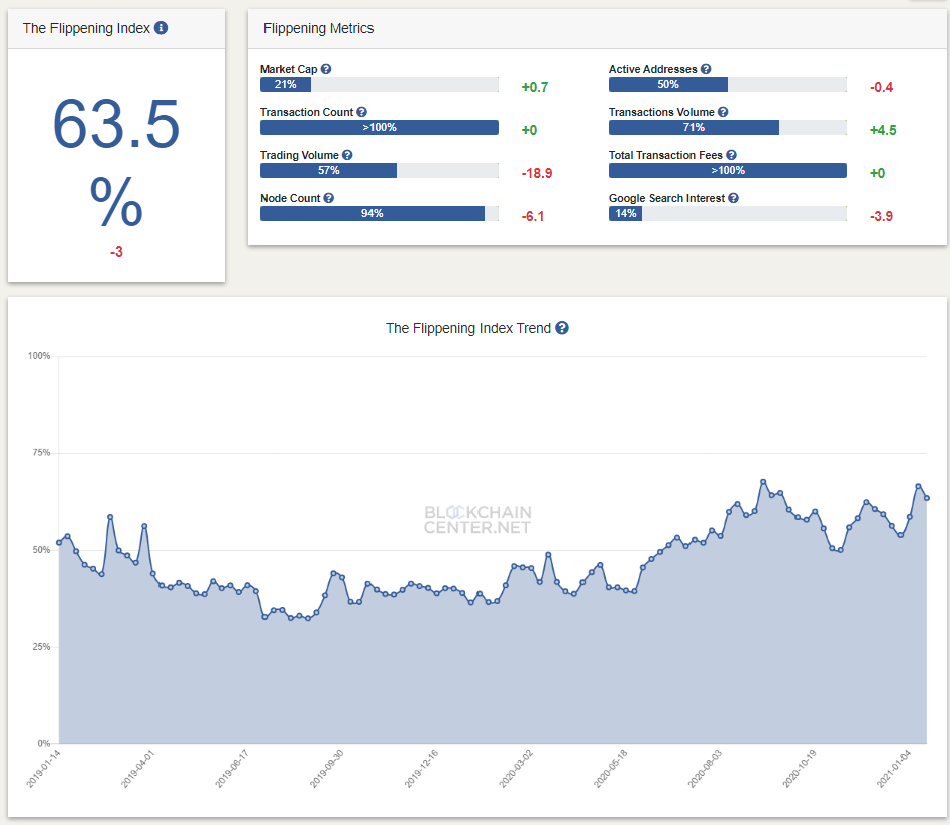 Generally, demand for Ethereum has increased significantly since the latter half of 2020, owing in part to the DeFi boom. As a result, transaction fees have skyrocketed, the flippening index noted that Ethereum surpassed Bitcoin by transaction count and total transaction fees.

How To Calculate Ethereum Gas Fees and Avoid High Costs

In contrast to Bitcoin, every operation on the ETH blockchain requires some amount of gas. Gas fees are part of Ethereum and it refers to the price required for Miners to execute transactions. This fee is not fixed but varies on network demand. A transaction can be delayed or stopped if it does not meet the Miners’ requirement.

There are several ways to calculate the fees necessary to execute a transaction. A sender could select an arbitrary fee or use gas calculators such as Ethereum Gas Station. Gas fees are paid in Ether (ETH) but denoted in Gwei. Each Gwei is equal to 0.000000001 ETH.

With gas fees sometimes rising as much as 200 Gwei, many users are becoming concerned about the high costs incurred for each operation.

Although only a general adoption of layer-two scaling solutions like Zk Sync, OMG’s Plasma, or xDai and sharding can truly fix this issue, there are three ways to avoid high gas fees and pay lesser costs.

The first is by avoiding transactions during times of the day coinciding with peak activity periods like the early U.S. trading session. Recent Data from Flipside crypto indicated that averagely, the Ethereum blockchain is busiest from 1 PM UTC- 6 PM UTC (8 AM EST and 1 PM EST – early US trading session) while the period with the lowest activity is between 9 PM UTC and 11 PM UTC which marks the close of US workdays. In addition to lower average costs, the evening period also sees lesser irregularities.

Second, sending a lower fee transaction with the belief that it will be confirmed in a few hours. This may be applicable for low-priority transactions like token transfers, while it is discouraged for certain DeFi protocols.

Third, by using the Chi Gas Token which lowers the total gas consumed by a particular transaction. Trading platforms such as Loopring and DeversiFi also render non-custodial trading with basically zero gas fees.

Despite Unexpected Market Dip, Ethereum Transaction Fees Moves up to $50