XMR/USD Is Rising in Value at $61.15 at the Time of Publication, Bouncing Back From the Earlier Two-Day Low of $52.48

Monero (XMR) is the 16th leading crypto asset with a total market valuation of approx $1.1 billion, and over the last 24 hours, the token has increased more than 4 percent to become one of the best-performing cryptocurrencies out of total 20. XMR/USD is rising in value at $61.15 at the time of publication, bouncing back from the earlier two-day low of $52.48 reached on April 10 following massive sell-offs on the crypto-currency market. Monero closely mirrors progress in Bitcoin (BTC) with a daytime growth of 3.91 percent. BTC/USD grew from an initial price of $8,571 to $8,915 (current price) by 3.91 percent. Monero’s price bounces sharply in anticipation of post-halving market positions as investors concentrate on strengthening the bullish side following the initial frightening fall over the weekend.

*Monero closely mirrors progress in Bitcoin (BTC) with daytime growth of 3.91 percent
*XMR/USD is rising in value at $61.15 at the time of publication, bouncing back from the earlier two-day low of $52.48
*Monero’s price bounces sharply in anticipation of post-halving market positions 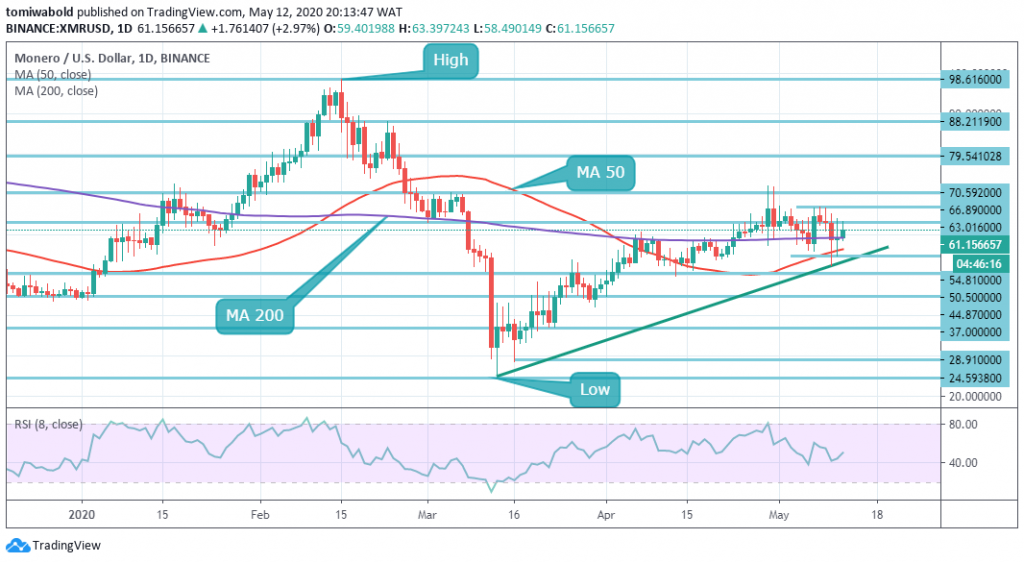 XMR/USD exchanges at $61.15 since bouncing off the ascending trendline support. The MA 200 lends support to the initial downside. The first primary support is offered by the MA 50, is slightly below market price. Monero improved the initial price steadily from $59.40 to $63.39 high with a 4.0 percent increase.

Based on the chart, the near-term resistance is $66.89, which may well allow a new $70.59 retest once violated. A reversal outside the horizontal channel opens the path for $70, $79, and $88 results in higher resistance levels. An additional support to the downside is at $54.81. It is appropriate to mention that level $50.5 is a critical support level, whereas the other support levels are level $44 and level $37. 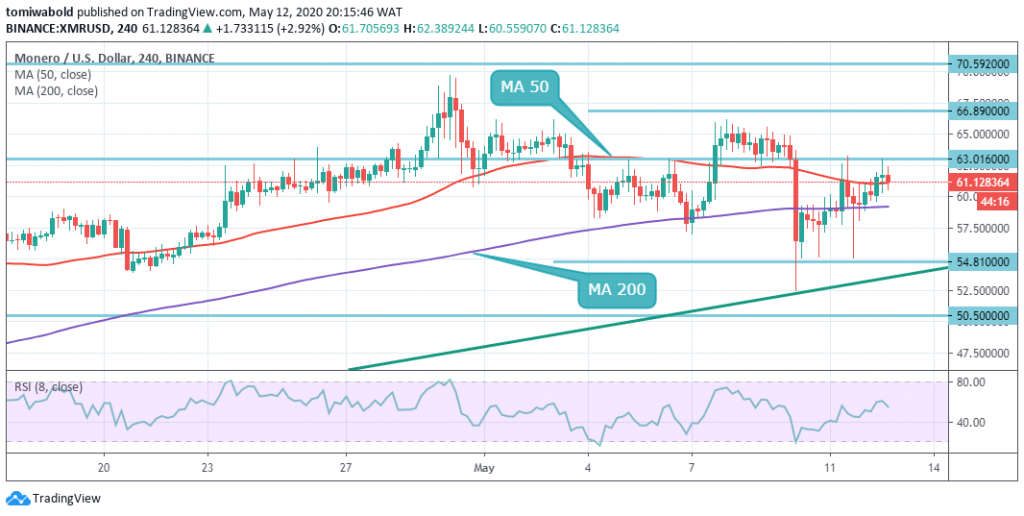 The indicators analyzed, such as the RSI and the MA 50 and MA 200 reflect a positive short-term view. After the rebound from the low, the RSI is leading north from 20. In the scenario that the rally continues to increase, XMR bulls may accumulate sufficient strength to gain market share and boost their positions in anticipation that the $66.89 resistance might break.

Currently, Monero holds the increase of the intraday as the bulls withdraw. XMR/USD approaches higher levels from $54.8 main support towards $63 region. In the center of the side-movement, XMR/USD appears green. When price breaks then a re-test of the old near-term low at $50.5 may be undoubtedly on the table, although, underneath the trendline, the axis may be somewhat risky.