XRP suffered year-round as opposed to other popular coins. The digital asset was initially outperforming few cryptos since the successful breakout on July 22, but the ongoing consolidation phase has been with higher volatility. Following a remarkable rally, XRP/USD lost its traction upon posting progress for two consecutive days. After flirting beyond the mid-$0.3 marks, XRP/USD stalls as bulls were unable to maintain the push with price now trading at $0.295. The market cap on XRP stands at $13.53 billion, estimated from a free float supply of $44.91 billion. Trade volume has been reaching $2.30 billion over the past 24 hours. Over the last 2 weeks, XRP has traded in a narrow range, suggesting consolidation till a huge move. Brad Garlinghouse, CEO of Ripple, has addressed the criticisms concerning XRP, the company’s third-largest cryptocurrency. He confirmed that Ripple has no intention to ‘reset’ its strategy to use XRP to solve $10T cross border payments.

*Following a remarkable rally XRP/USD lost its traction upon posting progress for two consecutive days
*After flirting beyond the mid $0.3 marks, XRP/USD stalls as bulls were unable to maintain the push with price now trading at $0.295
*Ripple has absolutely no intentions to ‘reset’ its strategy to use XRP to solve $10T cross border payments

On the daily, the price of Ripple (XRP) has been declining for two weeks now in a downward triangle trend. The move follows remarkable market volatility that saw XRP rally from July lows at $0.1740. The breach over $0.30 has become a boost in the sight of traders. However, XRP rapidly reached a $0.3262 barrier. Technically, as observed with the RSI, the price action presumably settles for consolidation.

The breakout of Ripple (XRP) is evident as the daily MA 50 crossed the MA 200 upwards, offering initial support as bulls concentrate on breaching the triangle resistance. Over the past 2 weeks, its trading approach has been overwhelmingly in support of the bears since XRP has been seeking lower levels under $0.30 and closer to support at $0.26. Creating consistent support at $0.2850 offered traders a chance to drive for gains into the triangle’s upper limit. 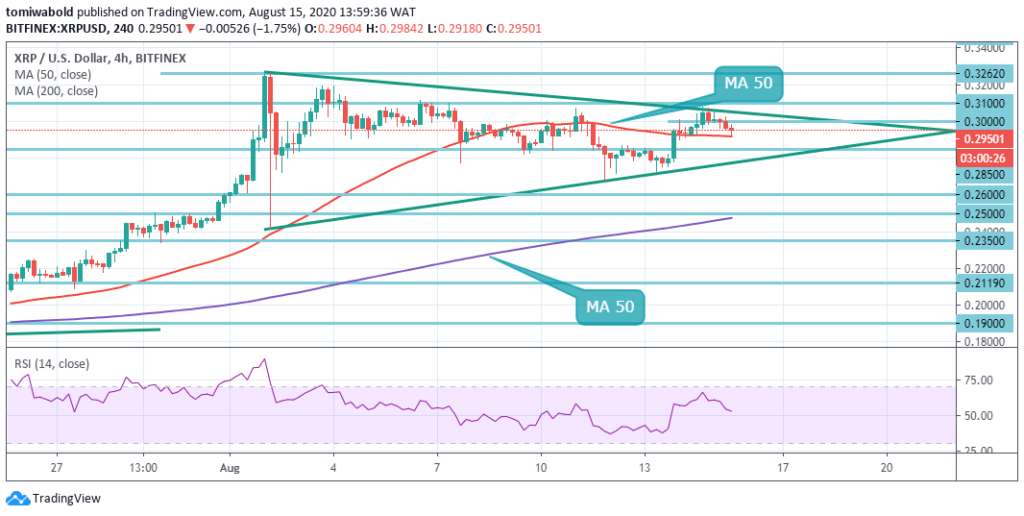 The 4-hour chart has moved distinctly in favor of buyers while price consolidates beyond the 4 hour MA 50, after a bullish change. Ripple (XRP) is on the edge of a 4-hour triangle breakout, even as the MA 50 supports the bulls with a launchpad that focuses on breaking the triangle. Once the breakout emerges into the scene, and a substantial volume of trading supports it, there’ll be a probability that XRP may not only push the market volatility beyond $0.30 but also push it past $0.3262.

XRP has launched a small short-term run, advancing the cryptocurrency to the support level of $0.30. Technical analysis suggests that XRP/USD bulls may need to hold prices beyond the $0.3100 level for additional gains to the $0.3262 level. The wider context implies that the next huge directional change in XRP/USD may unfold once price breaks from the well-defined triangle pattern.

Will Bitcoin (BTC) Bulls Launch Back at $12,000 in a Weekend Skit? Analysts Weigh Up As Tether (USDT) Market Cap Surges