XRP is not being exempted from the crypto-currency market’s recent rebound. The second-largest Altcoin has risen around 100 percent from the lows in March of $0.11. At the moment, XRP is breaching the $0.2200 level of resistance against the US dollar. Last week, with Bitcoin exceeding $9,400, XRP surpassed $0.23, displaying resilience despite a global downtrend. Even though XRP struggles for market dominance that was down 3.91 percent from an all-time high of 18 percent market share by the end of 2017 long ago. Nevertheless, the overall market valuation of the overall Cryptoconomy is approximately $256 billion and BTC is grabbing 66.5 percent with a market value of roughly $170 billion. A bullish run on XRP/USD is foreseen to surpass $0.2500 in tandem with Ripple’s declaration to be the first DLT-focused member of the global ISO 20022 standards body, driving global interoperability standards across financial firms.

*At the moment, XRP is breaching the $0.2200 level of resistance against the US dollar
*Last week, with Bitcoin exceeding $9,400, XRP surpassed $0.23, displaying resilience despite a global downtrend
*Ripple declares to be the first DLT-focused member of the global ISO 20022 standards body 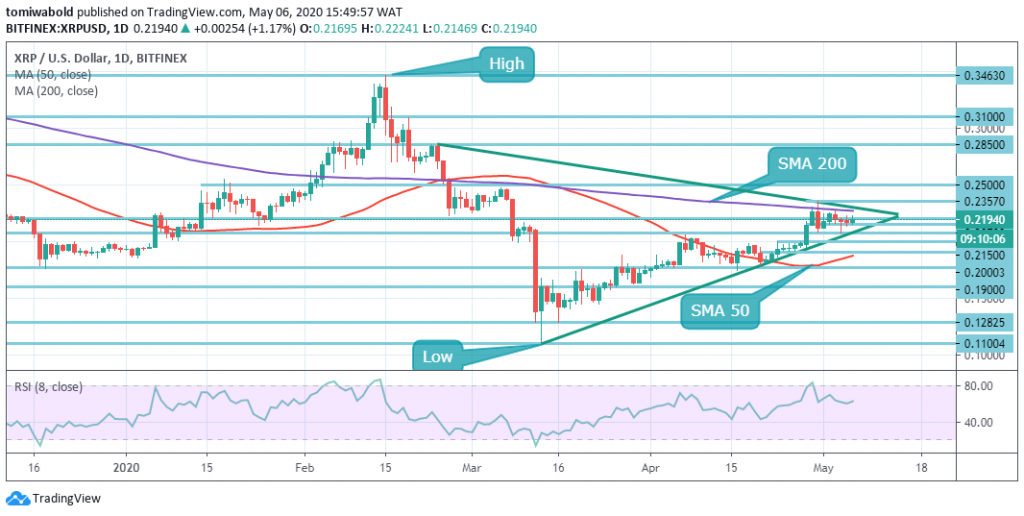 While, underneath the MA 200 resistance, XRP/USD is hovering on the daily chart at $0.2194 as well as the MA 50 support. There is also a triangle formation which constrains its momentum. A triangle breakout, nevertheless, is forecasted to initiate an assault on resistance zones of $0.25 and $0.31, accordingly. The initial support on the downside is the aforesaid MA 50. Furthermore, $0.2070 holds out as a significant region of support. Looking lower, the range around $0.2070 and $0.1766 (triangle support) is the predominant zone of support.

Out of a technical point of view, the RSI reveals the continuing horizontal activity may persist for some time. After a modest rebound from 43, the indicator rallies horizontally at 65. The moving averages and the confluence of the triangle tank momentum at 0.2200, stress the same horizontal trend also implies the bearish pressure should never be disregarded. 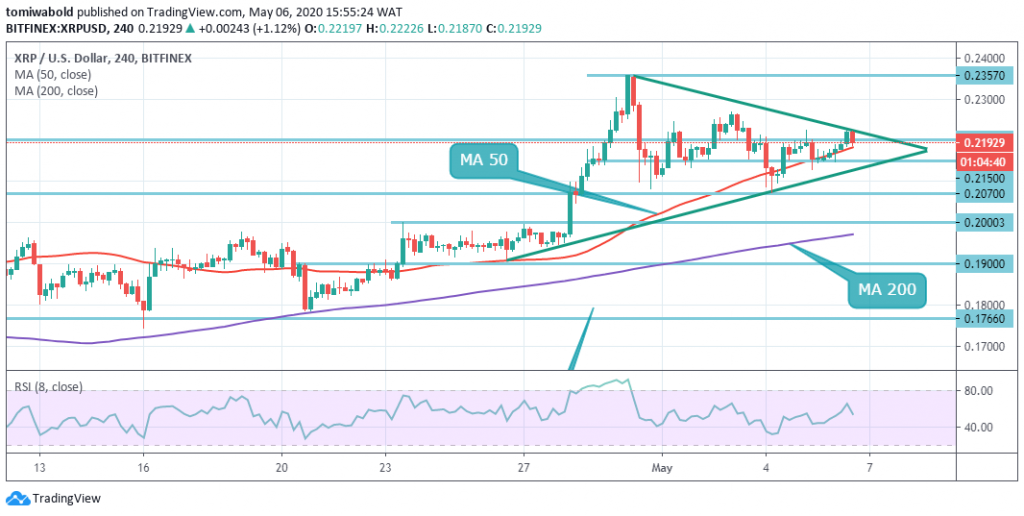 For some three weeks, however, the price has been trapped within the triangular range block, offering positive signs of a breakout. XRP moves within the range of preceding days while expecting a momentum resurgence as it enters the proximity that may trigger the run. A steady upward shift may occur if the price crosses the near-term resistance level of $0.2357.

Peter Schiff Says Bitcoin Will Have No Buyers After Halving, Causing Collapse

Peter Schiff Says Bitcoin Will Have No Buyers After Halving, Causing Collapse