A Fresh Rally Began on XRP/USD When the Asset Embraced Support at $0.36

The crypto market is a mixed pattern of red and green, BTC consolidates around $47k while few Altcoins witnessed profit booking earlier in the day. XRP price pumped to highs of $0.77 on Feb. 1 after the cross-border token attracted attention from r/Wallstreetbets. Although this was followed by a swift decline in XRP price to lows of $0.3449, XRP resumed an uptrend which was subsequently stalled at $0.49. A fresh rally began on XRP/USD when the asset embraced support at $0.36. Since Feb. 8, the XRP price has ticked higher, marking 5 consecutive days in the green. Ranking 5th largest, the XRP market cap stands at $27.23 billion, as calculated from a 45.4 billion free float supply. At the time of writing, XRP is changing hands at $0.6155 having reached intraday highs of $0.6495. Following the bullish spike on XRP/USD, the token is up by 6.15% on a 24 hour and 37.44% on weekly basis. XRP large holder addresses referring to addresses containing between 1 million and 10 million XRP have increased despite Ripple’s lawsuit. On-chain analytics, Santiment indicated that XRP large holder addresses increased by 3% from 1,117 on February 1 to 1,151 as of Feb. 13. 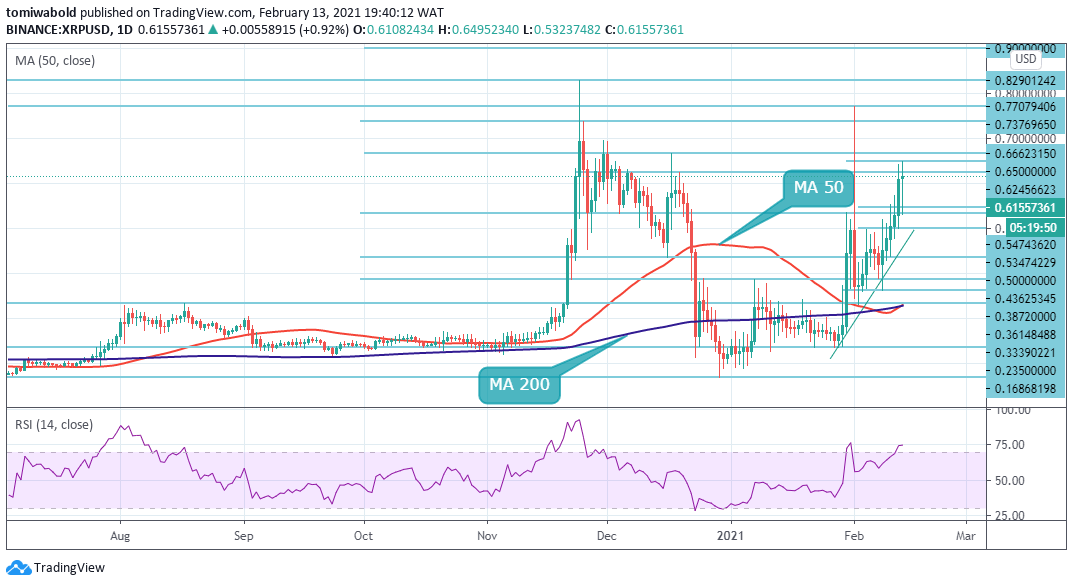 XRP rallied to highs of $0.6495 on Feb. 11 before it met significant resistance. The bulls must now try to push the XRP price past $0.6495 to continue the uptrend. Above this level, the first major resistance level is at $0.7707. Once this is surmounted, the XRP/USD pair may pick up pace and rally to $1. The RSI in the overbought zone seems to suggest bulls have the upper hand.

On the contrary, if the bulls are unable to thrust price above the barrier at $0.6495, XRP may revisit support at $0.5323. XRP bullish outlook will invalidate if the price plunges below $0.50. In this case, XRP may be forced to seek the next buyer congestion zone at around $0.33 situated at the MA 50.

On the flipside, barring an extended sell-off, Ripple’s XRP should steer clear of sub $0.60 levels. In this scenario, the most critical support sits at the MA 50 ($0.4928). The support at $0.3599 coinciding with the MA 200 may serve to counter further selling pressure. The XRP/USD pair is only bullish while trading above the $0.5 mark, key resistance is found at the $0.65 and 0.77 levels.

Bitcoin and Gold Markets Pump: Which Is More Worthy?

Litecoin (LTC) Surges Past $220, Why the Altcoin Market May Just Be Starting the New Bull Cycle

Litecoin (LTC) Surges Past $220, Why the Altcoin Market May Just Be Starting the New Bull Cycle