XRP Price Analysis: Declines on XRP/USD Takes a Hiatus at $0.48 in the Aftermath of Spark Token Airdrop

The cryptomarket is spotted red and green, as the BTC uptrend pauses to consolidate at $19k. XRP price has been inversely correlated with BTC price recently. When the flagship asset began its recovery from recent lows, the XRP price fell sharply. XRP was one of the best-performing major Altcoins during the November rally. From November 1 to 24, it rallied around 280% on Coinbase, surging from $0.2415 to highs of $0.9210. In a sell the news drop before the flare airdrop, XRP lost the $0.6 support, suffering a deeper correction. The XRP market cap stands at $22.1 billion, as calculated from a 45.4 billion free float supply. XRP is presently trading at $0.4933, having lost over 4.05% on the day. In the aftermath of Spark tokens airdrop which occurred on December 12th, declines on XRP/USD takes a hiatus at $0.4891. XRP price has been mostly influenced by the airdrop of Spark tokens based on a ‘buy the rumor, sell the news.’ Major exchanges such as Bitstamp, Coinbase were noted to have supported the airdrop.

*XRP lost the $0.6 support, suffering a deeper correction
*XRP is presently trading at $0.4933, having lost over 4.05% on the day
*XRP price has been mostly influenced by the airdrop of Spark tokens based on a ‘buy the rumor, sell the news’ 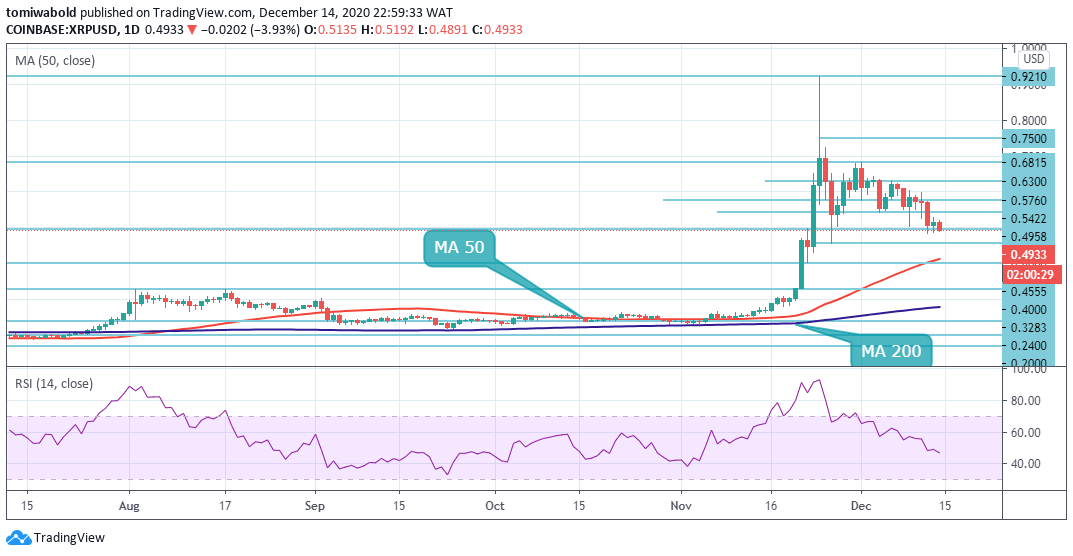 XRP rebounded off the $0.4858 support and closed above $0.52 on Dec.13. The price again turned down today but the bulls are attempting to defend the $0.49 mark. XRP’s downtrend is presently on a hiatus. Ripple’s XRP will need to move back through the $0.5422 pivot level to bring the first major resistance level at $0.5760 into play.

Support from the broader market would be needed for XRP to break through $0.5422 which would likely cap any upside. The second major resistance sits at $0.6300. On the flip side, if the bears sink the price below $0.49, the major support level at $0.4555 should limit any downside. Barring an extended crypto sell-off, XRP should steer clear of sub-$0.45 levels.

XRP has lost the 4-hour MA 50 while depending on the ability of the 4 hour MA 200 to hold. The rise in selling activities has thwarted all attempts for recovery. If the support at the MA 200 at $0.49 zone fails, the next tentative anchor zones are $0.4555 and $0.40. On the upside, bullish action will come into play if XRP reclaimed the support turned resistance at $0.60.