The Coin Is the Day’s Ultimate Gainer Out of the Top-5 Over the Past 24 Hours, With Over 8 Percent Rise

After a brief period of consolidation pulling Ripple (XRP) along with the trend in its USD pairing, the crypto-currency market has resumed recovery. Consequently, in their various BTC pairs, some Altcoins were smashed, and maybe even XRP as Bitcoin (BTC) price broke out of the two-month range and hit as high as $11,400. XRP’s USD pairing exhibited great intensity as it rose past $0.20 mark. The upside pressure on XRP/USD had gained traction and unleashed bulls toward $0.25. XRP reached the intraday high at $0.2442 and retreated by press time to $0.2384. The coin is the day’s ultimate gainer out of the top-5 over the past 24 hours, with over 8 percent rise. The market cap on the XRP is $10.69 billion, estimated from a free float supply of 44.85 billion. Trade volume has been reaching $1.99 billion over the past 24 hours. Within the last 24 hours, XRP has seen a surge over Whales’ activity as Ripple has transferred more than $19.18 million worth of XRP, as per XRP-watching bot XRPL Monitor.

*The upside pressure on XRP/USD had gained traction and unleashed bulls toward $0.25
*The coin is the day’s ultimate gainer out of the top-5 over the past 24 hours, with over 8 percent rise
*Within the last 24 hours, XRP has seen a surge over Whales’ activity as Ripple has transferred more than $19.18 million worth of XRP 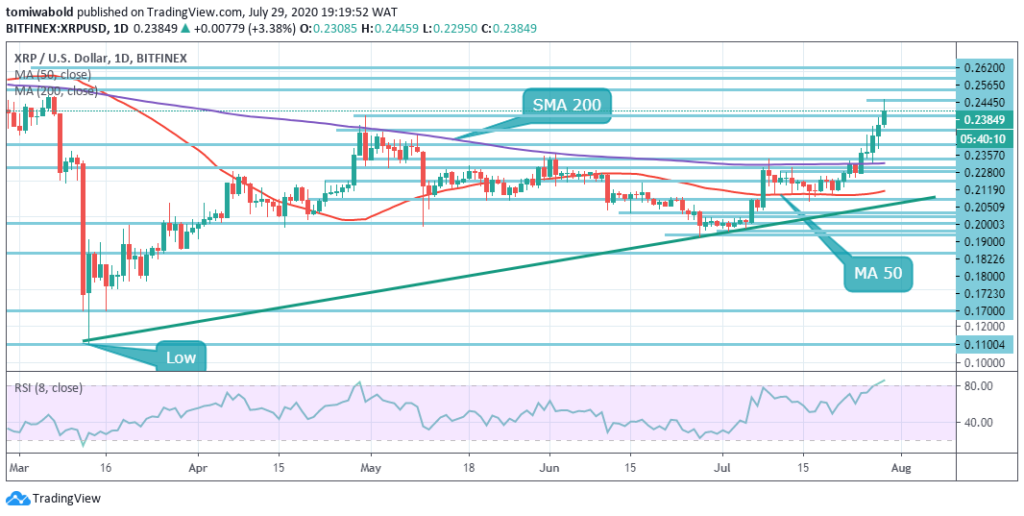 As shown on the daily, XRP’s USD pairing is exhibiting tremendous strength as it breached beyond the level of $0.20. Save for the level of $0.20, XRP prices also rose through the MA 50 and MA 200, thus exhibiting signs of more bullish traction. Beforehand, the chart shows a strong higher-low, which is one of the key elements of upward traction. The price is now higher, as it surpassed the previous high at $0.2280 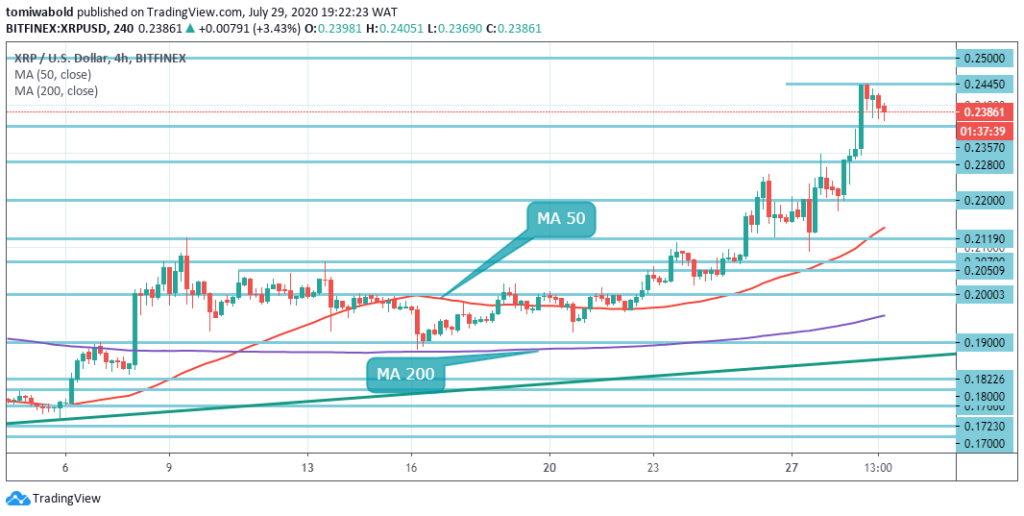 XRP/USD capped the rebound at $0.2442 and retreated by the time of writing to $0.2386. The asset retreats from the overbought zone, rendering it exposed to a short-term correction. Nevertheless, the RSI stays up past the 50 marks on the 4-hour chart and shows no signs of reversal so far, implying that the asset hasn’t lost its bullish strength.

The intraday high establishes initial resistance at $0.2442. If it’s out of the path, the upside is possible to gain momentum with $0.2500 being the next priority. Over the medium term, the horizontal line of resistance establishes the pivotal barrier at $0.2620, followed by further obstacles to the psychological $0.3000 level. On the downside, the primary target for correction is established by the horizontal support confluence zone on the path to $0.2200.

How To Promote Your Crypto Exchange Powerfully Using Social Media?

How To Promote Your Crypto Exchange Powerfully Using Social Media?