The crypto market terrain is dotted red and green. BTC rally keeps stalling while the Altcoin market seeks stability after the recent correction. On Nov. 24, Ripple (XRP) rallied to hit highs of $0.92 on Coinbase but the price failed to hold above this level. After diving to $0.455 lows in a market sell-off, the third-largest asset returned to trade above the $0.6 mark where it consolidated. On Dec. 4, selling pressure caused XRP bulls to lose their stance as the price plunged to lows of $0.5422. XRP/USD bulls regain their balance amid blows to reach an intraday high of $0.5966. XRP is presently trading at $0.58, having gained over 4.64% on the day. The XRP market cap stands at $29.3 billion, as calculated from a 45.32 billion free float supply. Ripple co-founder Jed McCaleb increased his XRP sales based on the agreement with Ripple in 2016 which allows him to sell up to 1% of the average daily XRP volume. Jed McCaleb is believed to own nearly 3.8 billion XRP. Analysts opined that these sales, at a point reaching 9.9 million XRP, is affecting XRP price.

*On Dec. 4, selling pressure caused XRP bulls to lose their stance as the price plunged to lows of $0.5422
*XRP is presently trading at $0.58, having gained over 4.64% on the day
*Jed McCaleb is believed to own nearly 3.8 billion XRP 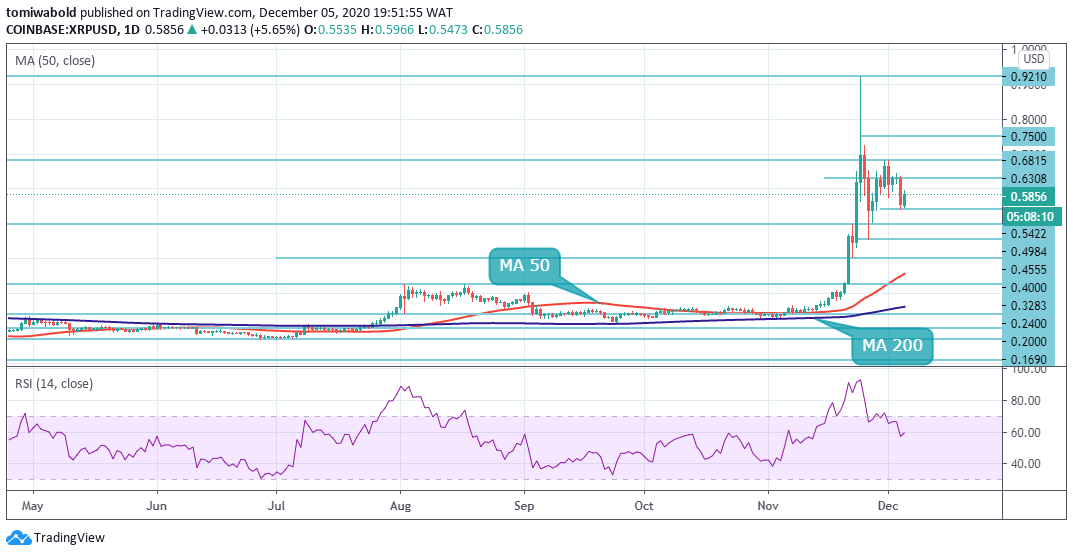 XRP/USD is seeing a rebound after the pair suffered a pullback on December 4. a recovery ensued when XRP embraced support at $0.5422. The bulls’ mission now is to push the uptrend past $0.6308 which acted as a cap since December 2nd. If they succeed, the XRP/USD pair could rally to $0.75 and then to $0.80.

Having lost the MA 50 support at $0.6050, an intraday high of $0.5966 may suggest XRP bulls haven’t lost hope in their bid to reclaim this level into support. For XRP breakout to materialize, XRP has to hold above the MA 50. Stability at this level is likely to give buyers enough time to aim for gains past $0.65 and then to $0.75 marks.

“Only Time Can Tell Bitcoin and Ethereum “Killer”, Here Is What Investors Should Watch Out for From Now

“Only Time Can Tell Bitcoin and Ethereum “Killer”, Here Is What Investors Should Watch Out for From Now