The cryptocurrency market is mostly green as BTC traded to highs of $42,000. XRP’s price plunged swiftly since Dec.18 when “SEC unveiled its lawsuit against Ripple for issuing $1.3 billion unregistered securities offering”. The declines continued until XRP hit multimonth lows of $0.17 on December 29th. XRP regained stability when it embraced support at $0.22. In a surprising move, the XRP price rose to set highs of $0.37 on January 7th. XRP/USD presently consolidates rebound from lows set earlier, up by 2.65% on a daily and 44.61% on weekly basis. The XRP market cap stands at $14.79 billion, as calculated from a 45.4 billion free float supply. At the time of writing, XRP is changing hands at $0.3300 having reached intraday highs of $0.3325. Asia’s Retail FOMO boosts Ripple (XRP) as trading volumes from major exchanges, particularly in Asia, show significant traffic in the XRP/USDT (Tether) and XRP/KRW (Korean won) pairings. This is suggestive of the fact that the markets in Asia have been the main driver of the XRP price rally.

*The declines continued until XRP hit multimonth lows of $0.17
*XRP is changing hands at $0.3300 having reached intraday highs of $0.3325
*Trading volumes from major exchanges, particularly in Asia, show significant traffic in the XRP/USDT (Tether) and XRP/KRW (Korean won) pairings 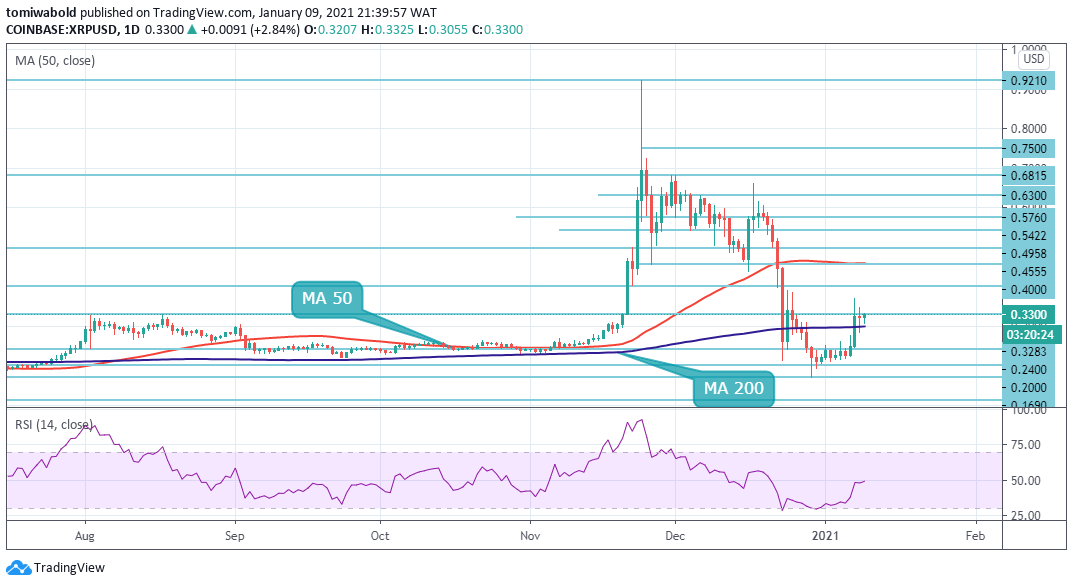 Buyers sensed an opportunity for XRP to partake in the ongoing bull run and pushed the price to highs of $0.37 on Jan. 7, but selling pressure at this level stalled a further upward climb. The RSI at the midpoint gives neither advantage to bears or bulls. On the upside, if the bulls can push the price above $0.3841 (December 25 high), this may result in upside gains beyond the MA 50 at $0.4555.

XRP hit highs of $0.37 on January 7th however the upside move was capped by the 4 hour MA 200 at $0.4000. In the meantime, XRP is trading at $0.3300 while buyers fight to take control over the price. The minor resistance range between $0.3300 to $0.4000 must be overcome before proceeding forward. Beneath the current price level, $0.3 is the support zone that must be kept intact to avoid panic selling.

As 2021 Ramps Up, Here Are Three Rising Trends Investors Should Watch Out for Bitcoin, Ethereum and DeFi