A Surprising Thing Occurred on ETH and Yearn.finance When Uniswap Fell by 22%, Recent Data Says This About Bitcoin Whales

Uniswap’s governance token, UNI, was launched in the late hours of Wednesday, September 16th. Barely 48 hours after it was launched, UNI recorded a 100% increase in price as the project airdropped a minimum of 400 UNI to anyone who had used Uniswap before September.

UNI is also reputed to have the fastest listing among the top three exchanges as it was listed within 5 hours of launch on Binance, Coinbase Pro, and FTX. This action caused a UNI price to surge to a high of $8.60 but was subsequently rejected as it fell by 22%.

Whales and institutions have a significant impact on the Bitcoin price because of the enormousness of their trades. Recent Data indicate whales are not selling huge amounts of Bitcoin at the present BTC price and institutions are accumulating BTC.

A Surprising Thing Occurred on ETH and Yearn. Finance When Uniswap Fell by 22%

When UNI climbed from $1 to its peak of $8.60, the funding rate of cryptocurrencies across major exchanges turned negative. However, when Uniswap fell by 22%, a surprising thing occurred on ETH and Yearn.finance. The price of YFI surged by 10.72% from $31,158 to $34,509 while ETH rose slightly by more than 1%. 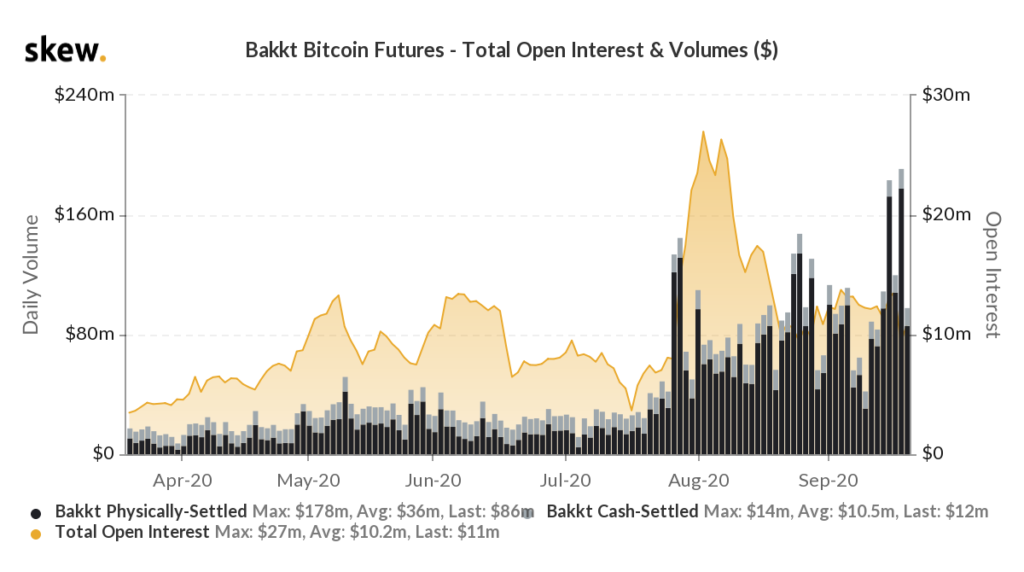 Hsaka, a renowned Twitter crypto-analyst noted an ‘inverse correlation’ between UNI and major DeFi tokens like YFI. He stated that this may indicate that many DeFi users were trading UNI but when UNI fell, the profits cycled back into top DeFi tokens, with YFI being the sole beneficiary.

While Bitcoin (BTC) price breaks past $11,100 today, Bitcoin whale activity and Bakkt’s record volume are hinting that both whales and institutions could be accumulating BTC which is a bullish signal. Concurrently, the daily volume of Bakkt’s institution-focused Bitcoin futures market hit fresh highs.

According to CryptoQuant’s Ki-Young Ju, fewer whales have been moving BTC to exchanges. Historically, the data signifies reduced selling pressure from high-net-worth Bitcoin holders while indicating that the majority of whales prefer not to sell at $11,000. This he said;

According to Arcane Research and Skew, Bakkt hit a fresh all-time high daily volume on Sep 5, the majority of which was physically-settled. It comes barely 24 hours after MicroStrategy purchased an additional $175 million worth of BTC.

VET Price Analysis: Price to Confront VET/USD Barrier at $0.015 Amid Progress of VeChain Blockchain Tech and As (CAFA) Member in China