Bulls are making a comeback into the crypto market after a momentary pause. Bitcoin (BTC) broke above the resistance cap at $13,250 to set new yearly highs past $13,600. Cardano (ADA) had a notable slip from its October 20 highs of $0.1244 to lows of $0.098 before bulls defended the price on ADA/USD. A gradual recovery has set in on ADA/USD to $0.11 intraday high. Cardano is the 11th largest cryptocurrency by market capitalization, with $3.24 billion, and its 24 hours average trading volume is presently at $944 million. At the time of writing, ADA/USD is trading at $0.1027, marginally down by 0.35% since the day’s start. Recently, Cardano’s price struggled to gain momentum above $0.1100 but declined sharply. On-chain metrics indicate a massive supply wall holding Cardano back. IntoTheBlock’s “In/Out of the Money Around Price” (IOMAP) model indicates that nearly 20,000 addresses hold more than four billion ADA at the $0.11 resistance barrier.

*Cardano (ADA) had a notable slip from its October 20 highs of $0.1244 to lows of $0.098 before bulls defended the price on ADA/USD
*At the time of writing, ADA/USD is trading at $0.1027 marginally down by 0.35% since the day’s start
*IntoTheBlock’s “In/Out of the Money Around Price” (IOMAP) model indicate that nearly 20,000 addresses hold more than four billion ADA at a $0.11 resistance barrier 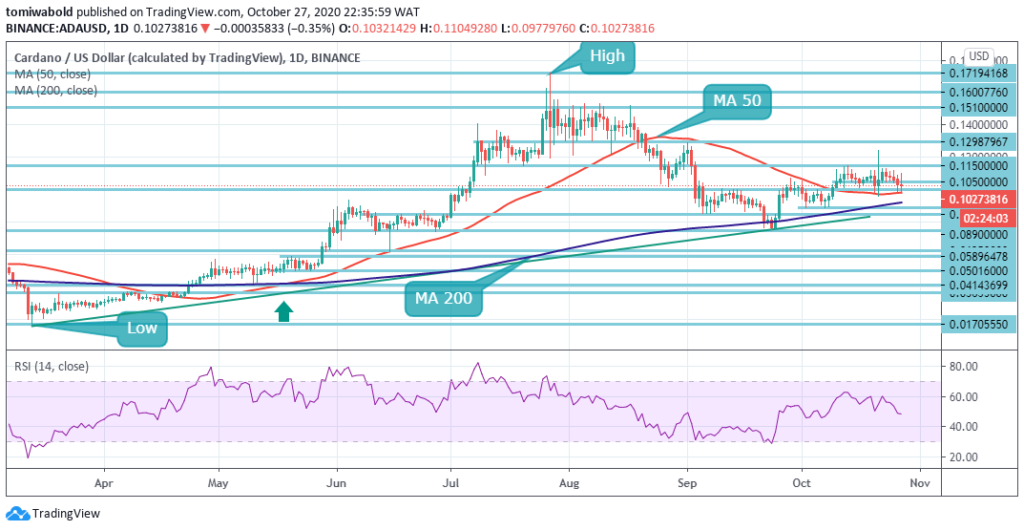 As seen on the daily chart, bulls are currently defending critical support levels to avoid losing the present upward move. The RSI is presently recovering with a little slit at the midlines. A formidable support point is found where the MA 50 is presently situated at around $0.0980. A rebound from the MA 50 which has already begun can further drive ADA’s price towards the resistance level at $0.1150. A breakout above this point can push Cardano as high as $0.1298.

On the downside, the MA 50 is capable of cushioning any further selling pressure. The price may begin a downward trend if there is a downside breach beneath the MA 50 at $0.098. In this scenario, extra support may be found at the MA 200 zone coinciding with the $0.092 mark.

As observed on the 4-hour chart, bulls are attempting to breach past the MA 50 which has acted as a cap since October 25. ADA must surpass the $0.1085 MA 50 zone and $0.1100 round figure to sustain an upside rally in the near term. For the bulls, their main target will be to flip the $0.1050 from support turned resistance line.