Ethereum, the second-largest cryptocurrency with a market cap of $24.86 billion had been under the activity of bears in the past three days.

The entire market had been hit by a volatility tide that saw top cryptocurrencies plummeting past key handles.

Ethereum faced the biggest sell-off as it shrunk by 12% to trade at a recent price of $227. The crypto asset had plunged steeply from its daily highs of near $233 to $209 where it sits at the moment.

The second cryptocurrency had an earlier major rally this month that initiated when it broke the $200 resistance which buoyed the crypto asset to its new year high of $290. It experienced a strong rejection, around $290 as the bulls could not spur it further.

However, Ethereum’s recent price activity in the last three days had been accompanied by fears and anxiety as this seemed to portend the crypto asset’s weakness. 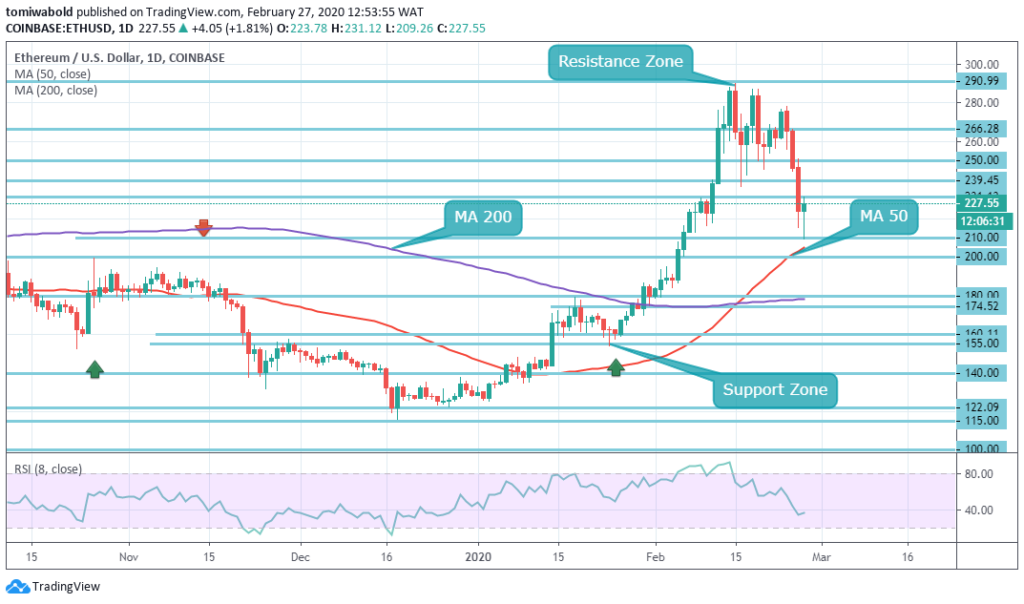 ETH May Soon Bottom Its Chart

A trader opined that ETH may still experience a downturn a little longer with bearish momentum receding as it approaches the key support level of $210.

In another supporting view, a trader sees ETH bottoming its chart in the long term run as it hits the $210 key support level. This may bolster an upside potential for the crypto asset, he believes.

One More Sell Wick, Then Boom!

George, a Twitter renowned crypto analyst foresees further downturn for the crypto asset in which it would print one more capitulation wick dragging it down to $200 key levels, thereby hitting a long term bottom which in turn will necessitate a rally. The crypto asset’s previous rally was initiated when it broke the $200 resistance which buoyed the crypto asset to its new year high of $290.

Another crypto analyst in the latest tweet believes an imminent rally is in place for ETH as it had printed nine green candles in nine weeks, climbing from $115 to $290, thereby no cause for worries due to its recent correction he maintained.

He opined that once the bulls could propel the asset past the prior $200 critical resistance level turned support level, ETH may experience a comeback shortly.