What are Bitcoin Futures?

The Chicago Board Options Exchange (CBOE) took the cryptocurrency world by storm when it launched Bitcoin futures trading on its platform on Sunday, December 10,2017. Immediately following its debut, the CBOE website underwent such an immense surge of traffic, that it slowed down its operations for brief spans of time.

Bitcoin, the underlying asset itself underwent a 26% hike in price. But if you thought that the launch of Bitcoin futures trading ended with CBOE then wait till 18th December when CME also launches its very own version of Bitcoin futures trading over its derivative platform. So, if you are thinking of taking advantage of the same, then you need to understand a few basics first which we shall talk about in detail today.

What is a Futures Contract?

A futures contract is an agreement between two parties to buy or sell an asset at a certain time in the future at a certain price.Every future contract has an expiry, and on the date of expiry the contract makers has to settle it. Since our topic of discussion is Bitcoin futures, let us understand that investors who are not much confident about the unregulated Bitcoin Exchanges can now speculate on the future price of bitcoin under a regulatory setup.

Other than just speculation, futures also aid in controlling portfolio risk especially when the underlying asset is highly volatile in nature. Oil for example fell below $30 a barrel in 2016 and has recovered slowly to $60 in present times. Since oil is a basic requisite for smooth running of industries such as airlines, it’s obvious for its yesterday’s price to be more desirable than the current rate. This is the main reason why companies like Southwest Airlines and Delta enter into oil futures to lock the price of oil in upcoming delivery. This risk frontier can also lead to losses if the actual price at the time of buying oil barrels is less than the price guaranteed in oil futures.

Bitcoin owners can also make use of bitcoin futures in a similar manner. Lets understand this with an example:

John owns one Bitcoin and let suppose the current price of a Bitcoin is $16,600. Due to the continuous rise in Bitcoin prices, John believes that Bitcoin price is at it’s high level and will fall for a short period of time. As explained above, a futures contract is an agreement between two parties to buy or sell an asset at a certain time in the future at a certain price.So here Bitcoin is the asset and Bitcoin futures contract is an agreement to buy or sell the Bitcoin at a certain price in future.

John sees that a Bitcoin future contract which will expire on 15th January is being traded at $17,600. John short sells the contract as he expects that Bitcoin price will fall in January. So, now John is long on one Bitcoin ( that he already owns) and short a January Bitcoin Futures Contract.

On 15th January, let us see the position of John in different Bitcoin price case scenarios. 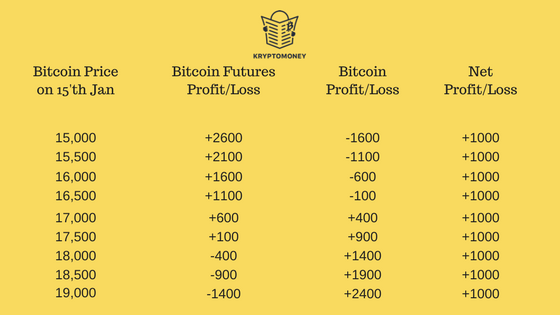 Note that any losses on the Bitcoin position is offset by the short position in the Jan Bitcoin Futures contract.  Because Jan Futures contract was trading at a $1,000 premium to spot bitcoin, thus the profit for this trade is equal to that difference.  So wherever the Bitcoin price goes, John has assured him $1000 as a trader.

If bitcoin drops dramatically on the short term and the futures contract drops in line with the spot price, John could always buy back the future, take a profit and have that profit offset the unrealized loss he experienced in his spot bitcoin.

Three bitcoin futures are currently listed by CBOE each having an expiry date of January, February and March. The final settlement value of these contracts shall be determined in regards to bitcoin’s price on the exchange Gemini owned by the Winklevoss twins.

The margin rates of such bitcoin futures are also higher compared to typical futures contracts, thus allowing the trader to set aside a hefty amount to cover up against potential losses. The margin rate of CBOE has been decided at 44% thus setting aside about $7,832 for the January contracts. This will surely safeguard investors from risks of volatility which from the very beginning had been considered as one of the basic characteristics of bitcoins. These cash settled contracts will help investors in deriving their final payment in cash in turn relieving CBOE from all the headaches of setting up and maintaining a bitcoin wallet.

CBOE shall be using the “XBT” symbol for its bitcoin futures.

Spot or bitcoin price will surely have a positive impact given the introduction of bitcoin futures. After CBOE and CME, other Wall Street magnets such as NASDAQ and Cantor Fitzgerald are planning to become a part of this lucrative game thus increasing the confidence of general investors. The fear of missing out(FOMO) is also luring in more and more retail and institutional investors into the crypto radar.

Coinbase exchange has reported a record new user registration of 300000 in between 22nd and 26th November as per Bloomberg. Demand for bitcoin futures can also help in pushing up bitcoin prices as more and more seasoned investors grow bullish about this crypto form. The exact impact of futures on the pricing of Bitcoin is hard to predict however futures prices are expected to come together on settling of the contract. Shorting of Bitcoin which had been termed by various financial powerhouses like JPMorgan’s CEO Jamie Dimon as a “bubble” will be much easier when opted through the bitcoin futures route. With the ever-increasing demand for Bitcoin it is unclear how it all will pan out in reality.