Cardano (ADA) on Friday is inexplicably bullish. At the time of publication, Cardano’s (ADA) price is up by a whopping 10 percent on 24-hour time frame at $0.043, with a $1.11 billion market cap as reported on CoinMarketCap. The spike emerges just a month after Cardano released their most optimistic protocol, Shelly. Following ADA/USD assault from Thursday’s low of $0.036 to $0.044 high breaching upside barrier, the bulls have sustained dominance for the third day in a row. Charles Hoskinson, IOHK CEO and co-founder of the blockchain project Cardano (ADA) has reported the release of the Daedalus wallet 1.0.0. The team says the new Daedalus ships with some major changes including speed and reliability. Daedalus wallet 1.0.0 is built for both Byron reboot and Shelley.

*Cardano’s (ADA) price is up by a whopping 10 percent on 24-hour time frame at $0.043
*Following ADA/USD assault from Thursday’s low of $0.036 to $0.044 high breaching upside barrier
*Charles Hoskinson, IOHK CEO and co-founder of the blockchain project Cardano (ADA) has reported the release of the Daedalus wallet 1.0.0. 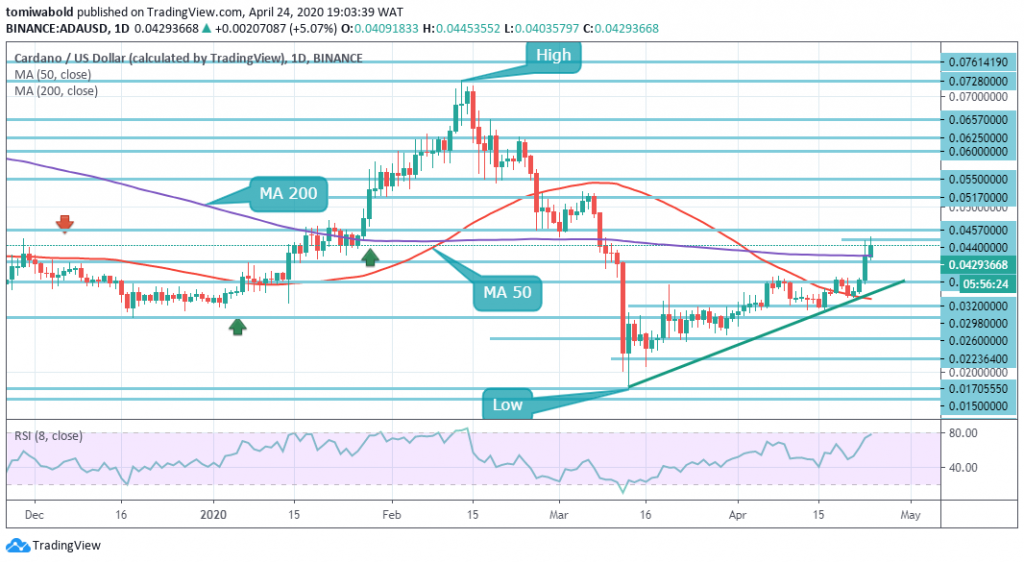 After breaching many barriers including the 200 MA, ADA/USD is trading at $0.0434, the seller convergence region remains at $0.0400 horizontal level. The analytical context stays strongly bullish, whilst the bulls require to work hard to exit the week in positive.

As shown in the RSI, until the sellers have a chance to counter, ADA/USD is projected to advance with the uptrend in the current and upcoming sessions on Friday. The role of the bulls on the market is supported by the upward trendline toward the positive zone. Cardano is inclined to seek respite in the previous resistance turned support zones, including the 200 MA, $0.0400, the 50 MA, and $0.0320 levels. 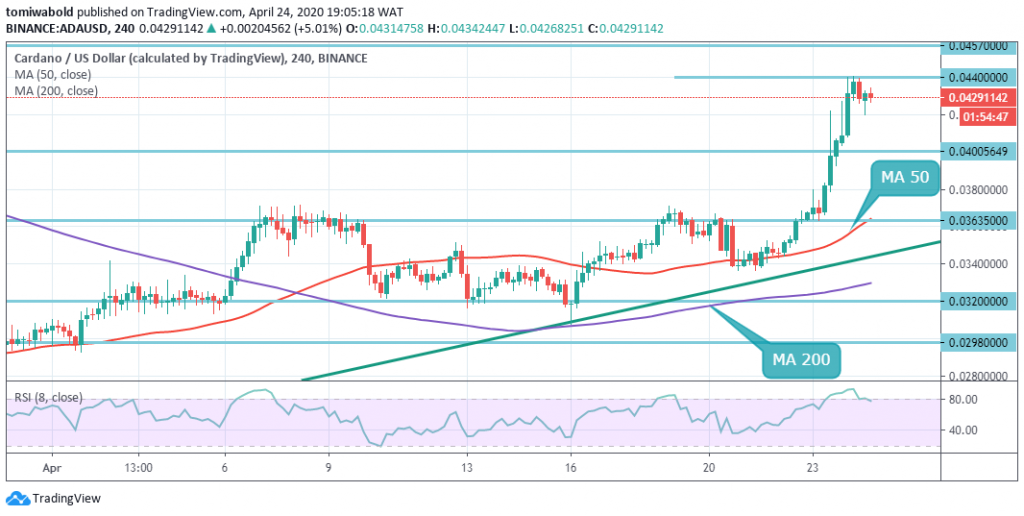 ADA/USD surged from $0.0363 on Thursday to $0.0440 this Friday as the bulls gained control for the third day in a row. In the growth stage, the price broke at $0.4000 above both the pennant formation and the horizontal level of resistance. The price is confronting immediate resistance at level $0.0457. The MA 50 and 200 suggest growing bullish momentum, while the RSI has continued to rise to the edge of the overbought zone.

Cardano saw a lot of bullish sentiment against the USD over the last 48-hours after gaining traction from level $0.0363. Although rated 13th in terms of market cap, ADA’s price is seen rising by around 10 percent over 24 hours. Glancing at the price chart for over 4 hours, we can see that the volume of Cardano grows by the day. When buyers continue to progress the trend, we should anticipate a long bullish momentum. On the contrary, sellers may be drawn back into the market by a feeble momentum.