The Bitcoin network undertook a hard fork on August 1, 2017, that segmented the network in two and ultimately led to Bitcoin Cash. Amongst many, BCH volume comes from Bitcoin transactions at the time of posting, with also massive quantity of U.S. dollar and tether (UDST). The market capitalization as of 9 June 2020 is at $4.67 billion. Bullish bias in the Bitcoin Cash network is declining as range trading extends beneath $260 on BCH/USD. BCH’s price has maintained trajectory within an ascending trendline pattern since March 12th. BCH/USD consolidates at $253.08 slightly after gaining around 1% in 24 hours. Bitcoin.com’s ex-CEO, Roger Ver stated that if BCH developers assert on a block size cap of 32 MB, which seems to be a contentious issue for the BCH community, he may quit the chain. Ver as well contended that decentralization is not a priority for the end clients of payment systems.

*BCH/USD consolidates at $253.08 slightly after gaining around 1% in 24 hours
*Bullish bias in the Bitcoin Cash network is declining as range trading extends beneath $260 on BCH/USD
*Bitcoin.com’s ex-CEO, Roger Ver stated that if BCH developers assert on a block size cap of 32 MB, which seems to be a contentious issue for the BCH community, he may quit the chain 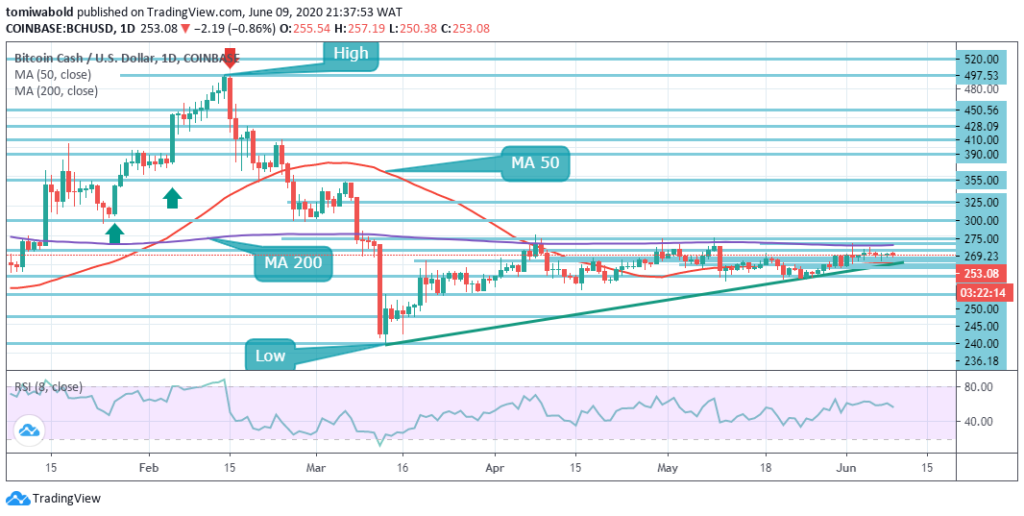 After sustained range trading, BCH/USD decreases from $257.19 intra-day high to $250.38 daily low as the market attempts to decline below the ascending trendline formation. The MA 50 and MA 200 run horizontally while at the same time increasing the distance between both which implies the price volatility is expanding. The BCH/USD has 3 main levels of resistance of $260.0, $269.23, and MA 200. On the negative side, MA 50, $245.0, and $225 are at 3 different support levels.

The RSI reveals that the traction on the market is constantly shifting from bullish to bearish, but it is still beyond 50. From a technical perspective, Bitcoin Cash may resume exchanging sideways within the ascending trendline. The price is confronting the resistance at the level of $260.0 and support at $250.0. 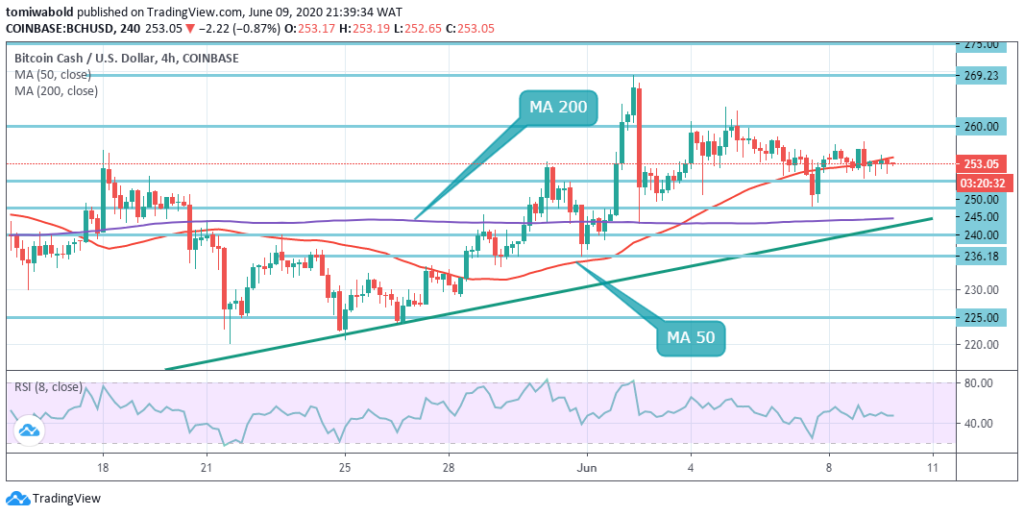 On the 4-hour time frame, range trading is more apparent, but Bitcoin Cash is presently aiming for a break as it steadily ramps up along the ascending trendline on the buyers’ confluence area. The price predictions for the short-term bulls would be $269 and $275 in extension once BCH rebounds from this area.

On the drawback, a reversal of the price may initially seek refuge at $245. Unless the push comes to shove and this zone is breached, the next support goal is $236, under the support of the channel and the 4-hour MA 50 to the $200 low level. Based on the current indecisiveness, that mostly implies a major decision is around the edge, once volatility increases, the price could go either way.