The Journey Never Ends, Only the Baton Changes! Here Is the Aftermath Reaction of BTC, XRP, XLM Rallies

Bulls Were on the Rampage in Every Corner of the Market

November 24th, 2020 will go down as a memorable day in history for Bitcoin and Alternative cryptocurrencies, Altcoins. Bulls were on the rampage in every corner of the market, Bitcoin (BTC) rallied to $19,449 while Altcoins rallied by triple digits to new 2020 highs.

Bitcoin was only one day higher in history on this day. Ripple (XRP) and Stellar (XLM) led the new “Alt Season” with weekly upside gains of more than 100%.

On Nov.24, XRP price rallied nearly 50%, surging to $0.92 on Coinbase. The demand increased to a point where it caused Coinbase to temporarily shut down, which coincided with a drop in BTC and ETH prices. On the Bitcoin and Altcoins rallies, trader Scott Melker stated:

“Bitcoin dominance. In case you were wondering, this is what alt season looks like. Quite reminiscent of 2017. Alts have a brief window to party, then you get back into Bitcoin, it rages. Rinse, repeat,’

He further added “Our week of alt euphoria was amazing. Now we wait and see.” 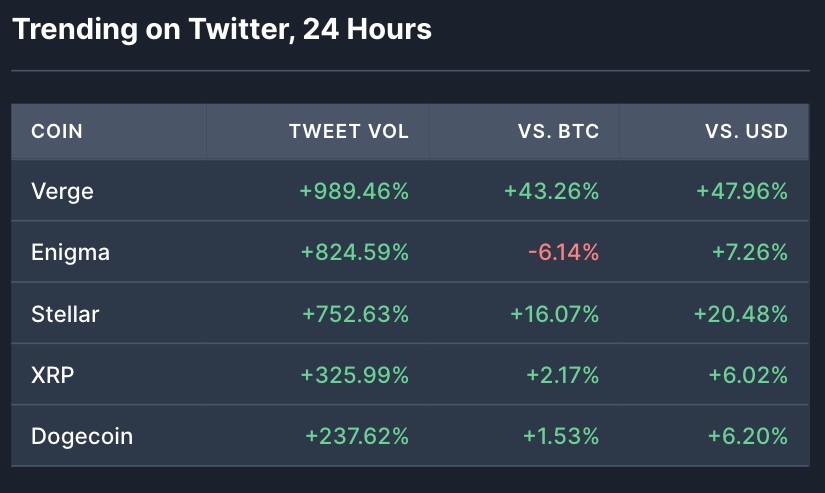 The Journey Never Ends, Only the Baton Changes!

After an impressive rally from Bitcoin, the flagship asset may consolidate briefly or even retest lower supports. Historically, in these situations, funds flow into Altcoins and cause them to rally higher. If Bitcoin price does consolidate in the coming days, this trend may play out amongst investors, thus extending the present rally seen among Altcoins.

Before BTC surged past $19,000, a trader with the moniker “Salsa Tekila” stated that when Altcoins cool down, profits would likely cycle back into BTC. He said:

“BTC been stalling for a couple of days, while money pouring in Alts. That’s not bearish for BTC. We’re consolidating for a while below the $19K, realistically I believe we’re likely to break the damn level. When? Probably when altcoins cool down and people sell back into bitcoin.”

There is a strong possibility that the trend of profits from Altcoins cycling into Bitcoin will continue in the near term. If this happens, the Altcoin market would likely stagnate while BTC shows strong momentum.

CNBC Fast Money trader Brian Kelly noted that the Altcoins rally was reminiscent of the January 2018 Altcoin mania, when BTC started to pull back and Altcoins rallied, then the entire market crashed in tandem in the months that followed. Based on this he is seeing a potential top at $19,000. This he said:

“More than any other asset class in the world, Bitcoin is subject to FOMO more than anything else. We are starting to see speculative coins, coins that are under $5, start to go up 30% to 40% a day. Those are the types of things that happen at short to medium-term tops.”

“Bitcoin is focusing on claiming a new all-time high and it seems highly unlikely that having come this close, it fails to break the 2017 record. With a dearth of resistance levels overhead, thoughts turn to the next key upside target. Using Fibonacci retracements levels, we see $29,100 as the goal, with a 1.618 move from $4,644 to $19,447 price points as our basis.”

CryptoQuant CEO Ki-Young Ju said that while some pullbacks may happen, $20,000 would likely be surpassed. He said:

“OTC markets are still active. $BTC Fund Flow Ratio hit the three-year low a few days ago. Only 3% of transactions are used for exchange deposits/withdrawals on the network. We might have corrections, but I think it would eventually break 20k.”