TRON price is trading at $0.0123, with a 24-hour trading volume of $1,278,713,329 at the time of publishing. In the last 24 hours, the TRX price has risen 16.67 percent. It has a circulating supply of 66 billion coins and 99.3 billion coins in total supply. All the major cryptos have come back to the crypto sphere as bullish momentum returned. We’ve seen a stretch of consolidation since then and now a breakthrough at the higher near term resistance level of $0.0120 on TRX/USD. TRON CEO Justin Sun tweeted that on 17 March 2020 (SGT) the Odyssey 3.7 was launched by the TRON network. Stating that significant changes in this version make it easy for users to deploy new blockchain with personalized modules, noting that the version is non-obligatory.

*TRON (TRX) hovers above the level of $0.0120 near term resistance level
*TRX/USD breaks past its triangle structure in the short and long term charts
*TRON CEO Justin Sun announced that the network has released Odyssey 3.7 upgrade 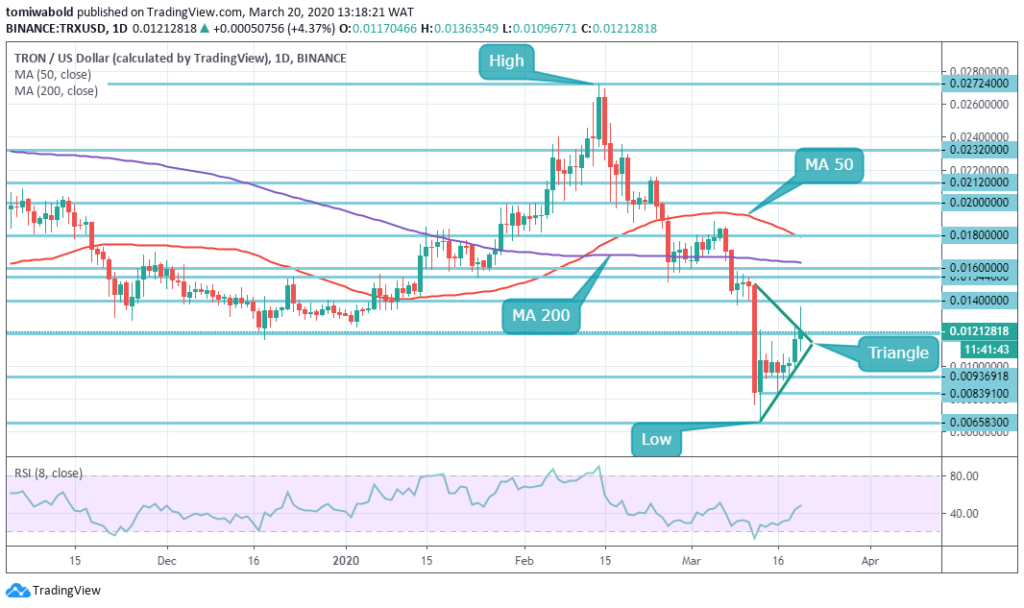 On the daily chart, TRX/USD could not break through the downward trending line and fell marginally from the level of $0.0102 to $0.0109 intra-day low level. This followed a bullish spike wherein the price jumped from $0.0102 to $0.0136 levels. TRX/USD is floating past the $0.0102 level horizontal resistance turned support while breaking beyond its triangle formation as well.

The RSI is rising horizontally above 40 while the pair has been publishing bullish candles in a row for 4 days consecutively. Finally, as it is TRX/USD is on the verge of reversing its momentum from bearish to bullish, the moving average 200 behaves like a magnet while drawing price upward. 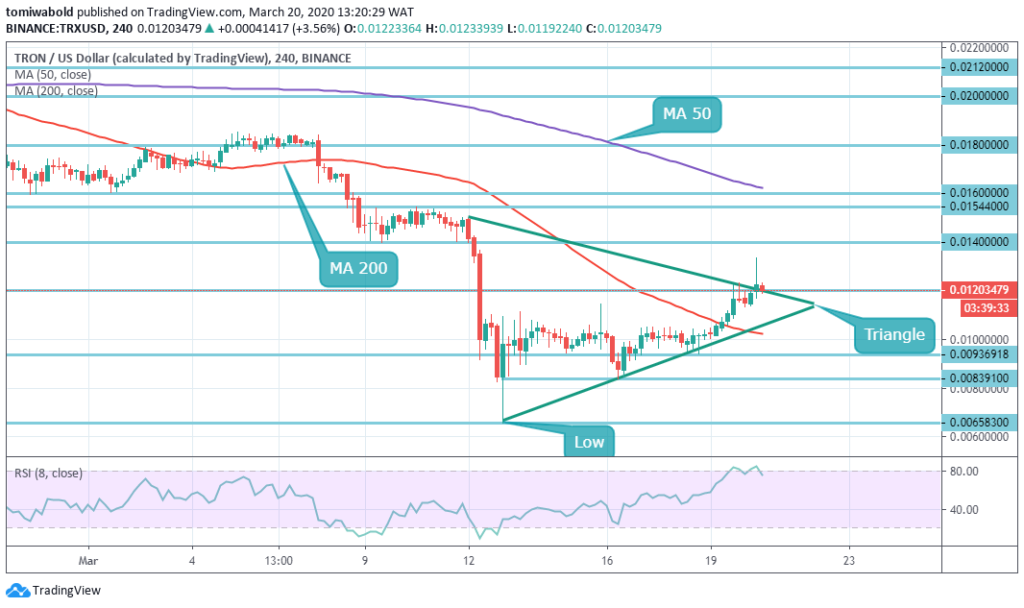 On the 4-hour time frame, a similar technical situation has played out, as TRX/USD is currently trading outside its triangle structure. TRON had failed to return upward since crashing through the main support thresholds during the fall as a result of the overall crypto-crash.

We have seen a surge of consolidation since then, and now a break higher. Technically, the level of $0.0102 was broken to the upside. The next level of resistance at $0.0140 may be approached as it’s on the way up. If that’s the case, that would mean that the pair has bounced nearly 100 percent from the recent low at $0.0065 level.

How to Anonymize Bitcoin