VeChain has been one of the performing assets in the past week as the bullish tone around VeChain (VET/USD) remains intact on Monday, after a temporary pullback on Aug 27. VET/USD has recovered after the sell-off to $0.0154; however, it still has some way to go to the recent top of $0.0228. Despite the downside correction buyers on VET/USD regain ground past $0.0180. While the crypto market and major tokens generally had a difficult August, the VET token has held stronger from the bear market. The VET market cap currently stands at $1.00 billion, based on a 54.45 billion circulating token supply, with $181 million in trade volume over the past 24 hours. VeChain is currently trading around $0.0184, up 7.94% vs USD in the past 24-hour period. VeChain has released an enterprise-grade sustainability solution called ToolChain. The blockchain-based solution aims to provide greater supply chain transparency while enhancing green energy practices into enterprises’ manufacturing and supply chain operations.

*VET/USD has recovered after the sell-off to $0.0154; however, it still has some way to go to the recent top of $0.0228
*Despite the downside correction buyers on VET/USD regain ground past $0.0180
*VeChain has released an enterprise-grade sustainability solution called ToolChain 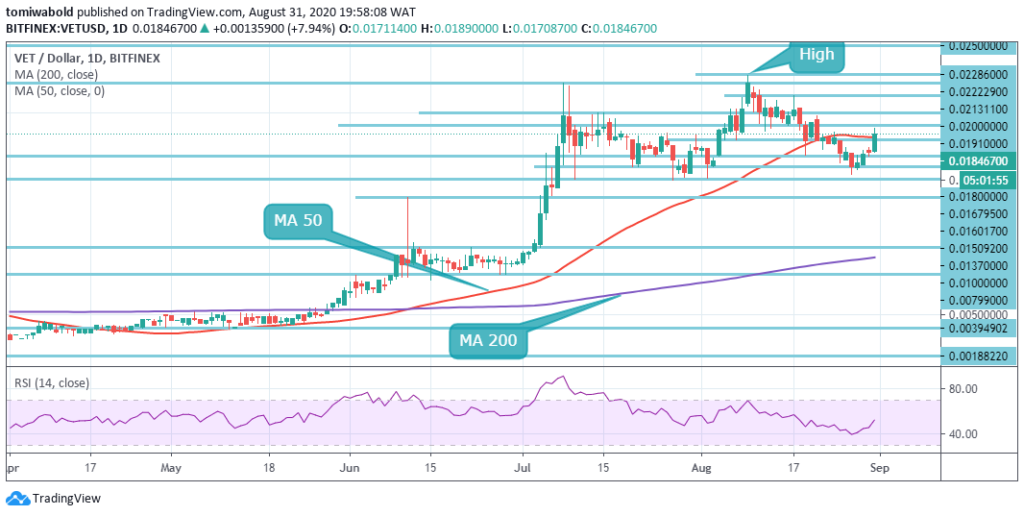 On the daily chart, the local VET/USD resistance is established at $0.0200 by the horizontal resistance, followed by $0.0213. A viable step beyond this region may enable an accelerated rebound to $0.0222 generated from the upper horizontal range and $0.0228 high in August.

Despite the pressure put on VeChain, the bulls have a task to make sure the market stays beyond the support range from $0.0160 to $0.0150. Technically, as per the MA 50, the direction of the least resistance is downwards. A bearish divergence implies that, in the current session, the pressure on VET will linger. The RSI, on the other hand, is around its midlines, indicating that buyers are beginning to take charge. 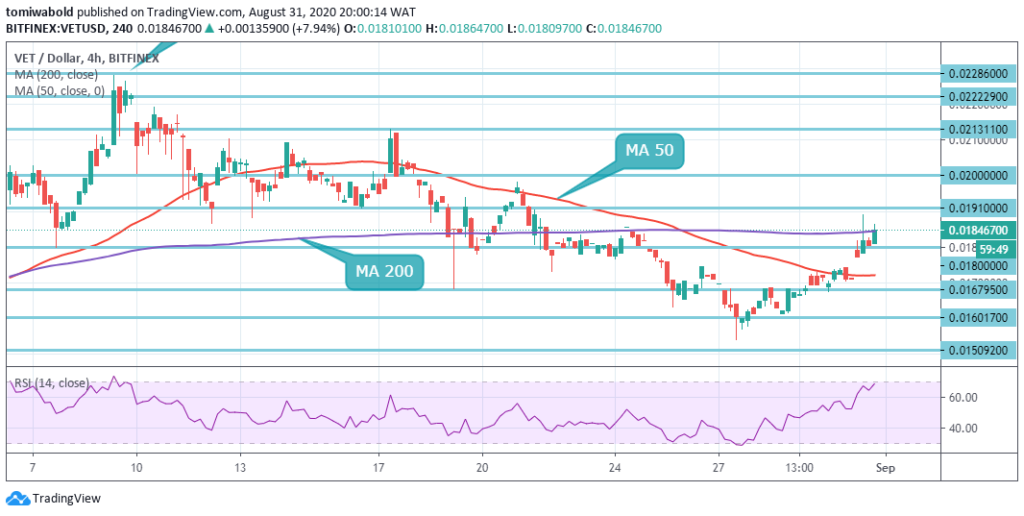 In the early hours of Monday, VET/USD bulls took charge while canceling a bearish weekend. The price increased from a low level at $0.0170 to an intraday high of $0.0181 in the process. The path of least opposition for the Altcoin remains upside from a short-term technical perspective, particularly after it charted a classic breakout from the limiting 4 hours MA 200.

What Is Buoying Ethereum (ETH) Recent Move Past $400, Analysts Have This Explanation