The first and largest cryptocurrency by market capitalization Bitcoin (BTC) soared to new yearly highs of $13,250. Bitcoin’s stay at $13,000 was however short-lived owing to price rejection. Formidable support kept the selling pressure in check while bulls eye the ultimate lift to $14,000.

After the historic climb past $13k on October 22, Bitcoin consolidated within $12,700 and $13,037. Some analysts think that BTC may experience a short term pullback before a climb higher while Denis Vinokourov of crypto exchange Bequant, believes that in the near term, at least, consolidation would lead to a healthier uptrend for BTC rather than an exponential upsurge. This he said:

“Overall, markets are approaching territory that doesn’t offer much in the way of price discovery potential but, for healthy markets, one would expect consolidation as opposed to exponential one-way traffic.”

Analysts Are Betting on Bitcoin (BTC) Price After $13K Climb

There are likely chances that BTC would see a continuation of its ongoing rally after a short consolidation period. Data from Skew indicates that all Bitcoin markets, including spot, derivatives, and options, are showing a high level of demand after the PayPal news.

Analysts expect the next consolidation range of BTC to be between $12,500 to $13,500 in the upcoming months before the next breakout. 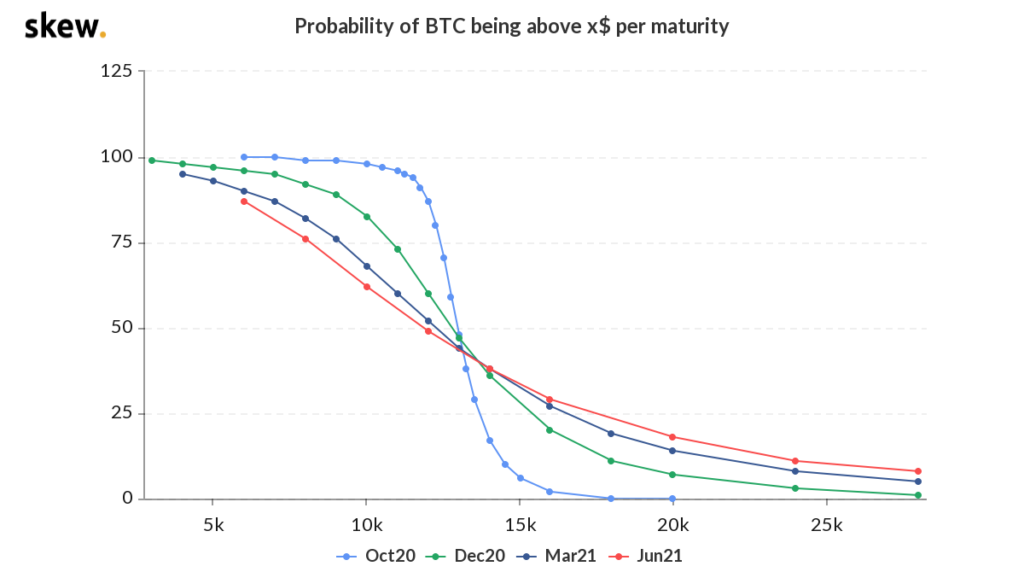 A group of analysts however believe that Bitcoin will continue its ascent to the upside in the days and weeks ahead, especially due to fundamentals. Vinny Lingham, CEO of Civic and a partner at Multicoin Capital said:

“I haven’t been this bullish on #Bitcoin since 2016. Macro events are teeing us up for another bull run. BTC could go 3-5X in the next 12 months, no coincidence that this period is during the US election. Expect high volatility, but BTC likely won’t drop below $12k during this period.”

And with on-chain and market data continuing bullish signs for Bitcoin (BTC), top analysts believe that a 2017-style rally may be imminent.

According to a recent report by an online comparison resource finder which features 30 crypto experts, Bitcoin’s price is likely to reach $14,283 by the end of the year. While their average prediction stands at $14,283 by the end of 2020, other predictions point to a much higher price tag, for instance, S2F model creator PlanB.

The analyst noted that Bitcoin is now aiming for $13,829 after which it may climb higher towards the $16,510 level. This move would bring BTC closer to the 2017 structure at $19,030. This may somewhat be another confirmation that a 2017-style rally may be on the way.

XRP Price Analysis: Bulls Soften on XRP/USD Towards $0.25 As PayPal Excludes Ripple (XRP) From Its List of Tokens