Bitcoin (BTC), first and largest cryptocurrency by market cap just traded to a new monthly high of $12,086 after days of consolidating around mid $11,000. In the last few sessions, Bitcoin price started a fresh increase from the $11,500 support area, gaining traction to break a couple of important hurdles near $11,800 to cross the $12,000 mark.

Presently, Bitcoin is yet to hit $13,800 in this new bull cycle, but analysts are seeing the flagship cryptocurrency embarking on a fresh uptrend which will push prices further in the days ahead. 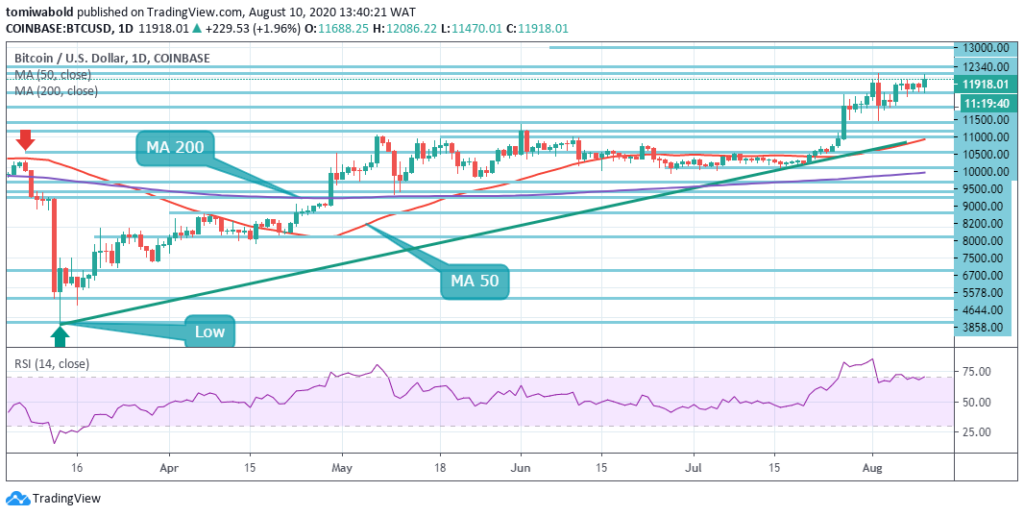 BTC reaching this new milestone maybe sort of a hint that Bitcoin’s bullish drive may as well extend into the long term.

The Combination of These Factors Led Up to BTC Price Gains

Bitcoin Derivatives: In 2017 and 2018 when derivatives were launched, their impact wasn’t yet profound on the BTC market.

However, following a massive adoption of futures and options, the impact on Bitcoin spot price bloomed with a focus key on the funding rate especially. Recent Bitcoin Derivatives Data indicated that the funding rate of Bitcoin futures markets is in the “neutral” after previously trading positive in the prior week.

A Weakening Dollar Amid Geopolitical Tensions: at the moment, the scenario presents a weakening dollar amid geopolitical tensions escalated by the Tiktok ban. This adds up to the current weakness in the U.S. dollar as well as Coronavirus fears prompting investor flight to safety.

Also, U.S President Donald Trump recently signed a series of executive orders on Coronavirus stimulus which may have contributed to the narrative.

Craig Erlam of Oanda stated that due to a weakening dollar, Bitcoin is getting a bid, likewise gold.

Where Is Bitcoin Heading Next?

Analysts say that where Bitcoin may be headed next in the near term could be deduced by its correlation ties with stocks and gold.

Whichever one, it correlates with most, which is not yet clearly defined, may give a hint on its next move. During the March market carnage, Bitcoin first correlated with stocks then after BTC’s recovery, it shifted to gold.

Gold hit all-time highs in its U.S. dollar pair weeks before Bitcoin began its rise and it still does. Another hint for where Bitcoin is headed in the near term is seen in a “gap” in CME Bitcoin futures markets.

Volatility over the weekend saw BTC futures close on Friday at $11,680 and start at $11,750, Bitcoin historically fills such “gaps” within days or even hours.

PlanB, creator of Bitcoin’s S2F model recently stated that the bullish action in the past weeks is exactly to be expected. He further added that Bitcoin pushing past 6k was significant. This he said;