Bitcoin, First and Largest Cryptocurrency Is Trading at $9,182, Losing 0.3% Since the Day’s Start

The Chicago Mercantile Exchange also referred to as CME launched its Bitcoin futures platform on December 18, 2017. CME offers monthly contracts for a cash settlement and now, options on Bitcoin futures.

Bitcoin (BTC) had its 3rd halving in May. Halving is regarded as the main catalyst for massive upside movements.

However, in the last two months after the halving occurred, nothing seemed to happen regarding Bitcoin price activity.

Bitcoin afterward was caught in a web of sideways trading, stagnated beneath $9,500. Bitcoin lackluster price action trickled down to trading activity in Bitcoin futures listed on the Chicago Mercantile Exchange (CME) as the latter recorded a decline of recent. 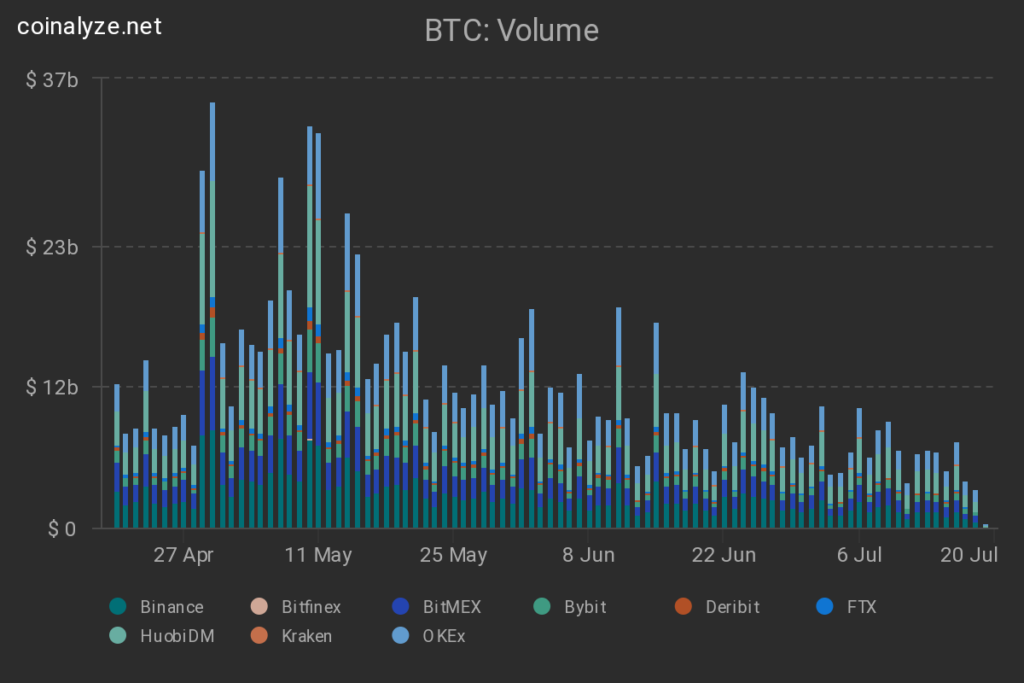 On July 17th, CME Bitcoin futures daily trading volume plunged to a value of $87 million accruing from 1,895 contracts to mark lows last recorded mid-April, when the volume was at $77 million.

This is a huge decline from the highs of $914 million set on May 11, the day Bitcoin had its third halving. This decline was also seen in the aggregate daily trading volume which dived from $36 billion noted on the halving day to as low as $4.65 billion, shedding 87%.

CME’s open interest referring to outstanding contracts yet to be settled that reflects the measure of institutional involvement also went down alongside the daily trading volume. On July 17th, open positions value plunged from May 19 highs of $532 million to $364 million on CME, shedding 31%.

Bitcoin, first and largest cryptocurrency is trading at $9,182, losing 0.3% since the day’s start.

Despite CME Bitcoin futures and technicals marking bearish, on-chain indicators seem to be giving another narrative.

First, on-chain indicators are predicting that the much-expected bull run is nearly or already at the doorstep. Ki-Young Ju, Crypto Quant CEO, recently stated that the outflow of Bitcoin from exchanges is signaling the impending start of a bull run:

“I think the #BTC bull market will start soon. Average Exchange Withdrawals value is going down and about to touch the retail investor-level threshold. Historically, the Bull Market starts when retail investors become active.”

Second, the Hash Ribbons, an indicator that derives signals from changes in the network hash rate recently flashed green indicating buy for BTC, this is something that has led up to all of Bitcoin’s massive bull run.

Third, the fact that aggregate or global open interest stays up near $4 billion, setting highs last seen in early March coupled with a dwindling trading volume may signal that investors are still holding on to their positions.

In this kind of scenario, markets usually extend the earlier move whether bullish or bearish. In Bitcoin’s case which is trading recently within the $9000 to $10,000 may mean an extension of its move beyond the $10,000 level in the near-term, continuing the uptrend which brought it up from its March bottom of $3,800.