Bitcoin has soared 16.86 percent against the US dollar since King cryptocurrency began recovering in early April. During this time the exchange rate was driven by an ascending pattern of a trendline. Reinforcement of the first cryptocurrency is driven by rising levels of trading, demonstrating the intensity of the positive process. BTC/USD is floating near $7,060, down from the $7,155 intraday high, while bears trap faltering near $7,000. Given the retreat, daily, the crypto has added 4.5 percent. The latest data from Blockchain’s monitoring tool suggests Bitcoin (BTC) reported new evidence of progress as its hash rate rebounds back to levels before the crash in March, erasing loss. Only until lately, the average hash rate of 7-day Bitcoin has been 114 quintillion hashes per second (h/s).

*BTC/USD is floating near $7,060, down from the $7,155 intraday high
*Bears trap faltering near $7,000
*Bitcoin (BTC) reported new evidence of progress as its hash rate rebounds back to levels before the crash in March, erasing loss. 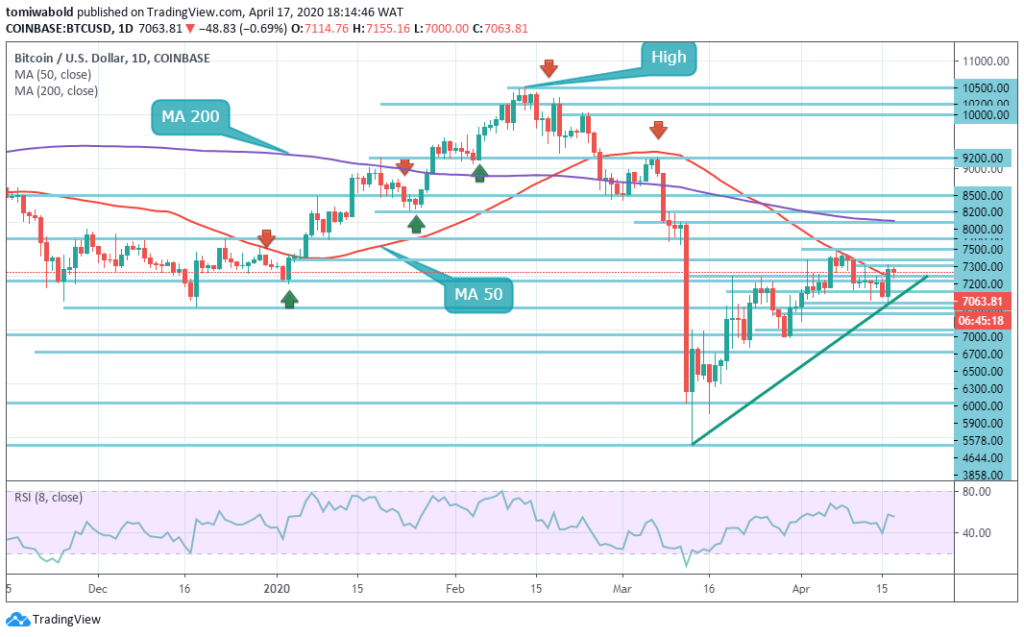 BTC/USD is increasing in value at $7,060 at the time of publishing, with more than 4.5 percent of daily gains. The king digital asset has stabilized beyond psychological $7,000; although, the next high resistance of $7,200 restricts the further upside. This resistance is formed by a convergence of strong technical indicators involving strong prior recovery and retracement of 50 percent from the high of February to downside shift. When it’s out of the path, for the next emphasis on $7,500, the upside is expected to gain momentum.

At the downside, a daily horizontal support line (currently at $6,900) is formed to support it. This line has constrained recovery as of the early April, resulting in a steady trajectory of higher alignment for BTC bulls; nevertheless, unless BTC struggles to hold the ground, the sell-off could be expanded to support zone of $6,500-$6,300, that comprises the lowest levels of the preceding two days and 38.2 retracements for the aforementioned drop. 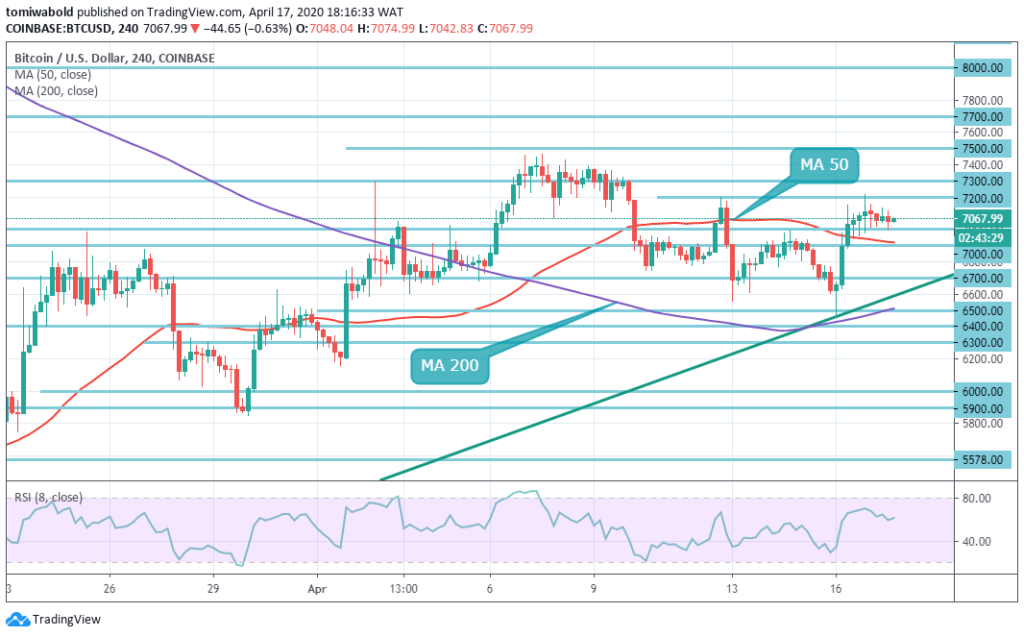 The bulls are making a conscious effort to cross beyond the $7,200 price mark in the near term, attempting to break the resistance zone, which is seen ranging from $7000-$7200 but demand stays intense around this zone. The previous session saw a retest of a broken 4-hour flag. Bitcoin showed a strong recovery to levels above $7,060, following a decline to $7,000 earlier today.

Nevertheless, intense market fluctuations suggest investors favor short-term positioning. The drop to $7,000 was initially bought promptly, taking prices back to level at the beginning of the day. The $7,000 short-term round price is attracting focus from traders. The BTC/USD pair may continue to surge in the upward trendline pattern soon. Bullish traders may be hitting the $8,000 mark in trading sessions next week.