IOTA has been on the market towering above major cryptocurrencies despite a marginal retracement. The recent bull run is no accident as it is followed by a substantial surge in the volume of trading. Currently, IOT/USD is seeing $17.2 million in volume per day, and, as of now, the market cap for the digital asset is around $688,761,575. IOT/USD shifts price at $0.2442 at the time of writing. The coin reached the prior day’s recent high at $0.2662 and marginally retraced into today’s low at $0.2413. IOTA released the first of IOTA 1.5 upgrades, a major upgrade to its Hornet node software. The upgrade will result in a higher adoption, decentralization, and enhanced network performance for IOTA stakeholders as developers do not need to acquire expensive hardware and can start running a node on the network within minutes.

*The coin reached the prior day’s recent high at $0.2662 and marginally retraced into today’s low at $0.2413
*IOT/USD shifts price at $0.2442 at the time of writing
*IOTA released the first of IOTA 1.5 upgrades, a major upgrade to its Hornet node software. 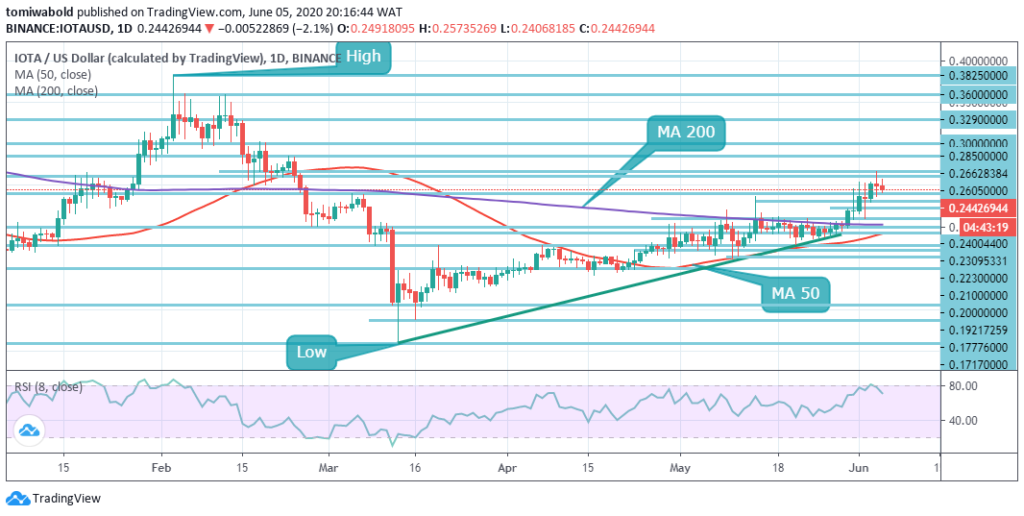 The coin has retraced from the latest $0.2662 high recorded in the prior session; though, at this stage, the upside traction appears to be intact. For an extended recovery, we’ll need to see a feasible leap beyond $0.2662. This hurdle is formed by the upper horizontal line established on the daily chart from February 25, 2020, detaching price from a stronger potential barrier toward $0.2850.

Once it is outside of the path, with the next emphasis on psychological $0.3000, the upside is expected to get traction. Also on the daily chart, a Doji has evolved which depicts anticipated reversal and is usually a bearish setup. Once the downside momentum gains traction, IOT/USD may withdraw to $0.2100 which early in May served as a resistance. 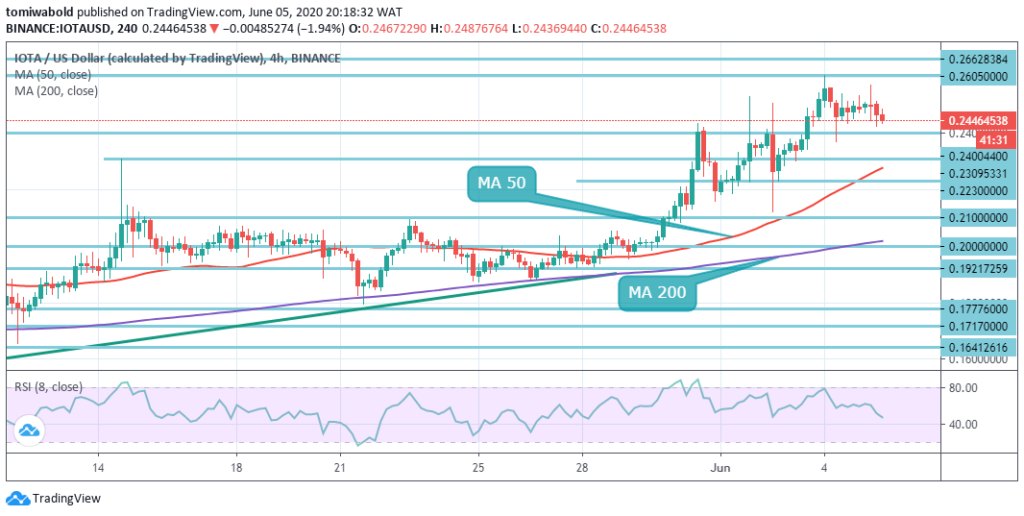 On the 4-hour time frame, volatility has intensified and the price is expected to bottom out on course for upside continuation, IOT/USD price action is presently capped at $0.2605, while an upside breakout would reinforce the upside bias continuation to $0.2850. Technically the movement is in buyers’ spot. Also, IOTA steadily increased the gap above the moving averages.

Besides that, in case of a reversal targeting $0.2230, the MA 50 is on standby support. The MA 200 is shifting over to the bull zone. Once the MA 50 and MA 200 for the short term broaden further, the IOTA price may spike even more to $0.3000. On top of that, the RSI forms a price divergence as higher IOT/USD trends within the positive region signifying upward run which would be a major milestone for IOTA bulls.

XRP Whale Moves Over $142 Million Worth of Fourth-Largest Asset