What Is Buoying Ethereum (ETH) Recent Move Past $400, Analysts Have This Explanation

Despite the bulls’ attempt, Ethereum was strongly rejected to plummet to $370 on at least two counts. On the first count, the ETH surge to $411 was short-lived due to the absence of adequate volume.

However, a change of narrative occurred when Ethereum bulls in a heroic feat firmly surmounted the $400 key level for the first time in a few weeks, with buyers now attempting to flip this level into support.

Ethereum price returns into the green as it surged past the $400 key level to trade at its recent price of $424, gaining 6.52% which is an outperformance to Bitcoin’s 1% gain and most other major Altcoins. 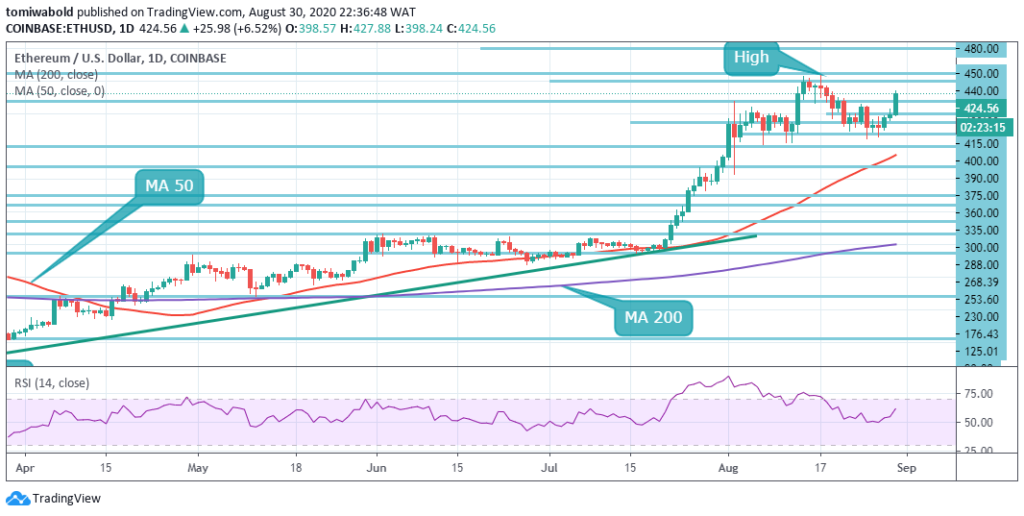 Ethereum at its recent price of $424 is trading beyond the upper boundary of the trading range it has been caught within in recent weeks.

What Is Buoying ETH Past $400? Analysts Weigh In

When ETH struggled to gain a foothold above $400 on multiple occasions in recent weeks, ETH bulls were busy recharging as seen in the strong reaction to a $380 support level.

An analyst attributed ETH breaking past $400 as a consequence of Ethereum technical breakout- Ethereum just broke a key resistance level which made it incur an upward momentum.

Another analyst states that he is keenly waiting for $400 to be confirmed as support, like a flip of this level from resistance to support could be all that ETH required to see significantly further upwards momentum.

Another analyst stated that his apt attention is particularly on $405 as ETH near-term trend may be determined by how it reacts to the resistance that sits at $405 in which failure to surmount could cause it to see some significant near-term downside, plunging it to as low as $320.

Ethereum however remains at a crucial moment in its journey as indicated by an RSI which is slightly above midpoint suggesting a balance between supply and demand.

In the news recently, transaction costs on the Ethereum blockchain hit record highs. Most reports allude ever-rising gas fees which refer to tokens paid to Miners who confirm and enable transactions on the Ethereum blockchain to the DeFi platforms. A school of thought however believes that DeFi may play a part, but the main issue may be institutional.

DeFi’s explosive rise however continues with total locked-in value peaking at $9 billion as at the time of this writing.