Since the Crypto-Mania Season, XRP Has Relatively Traded Beneath Its All-Time Highs of $3.30

Since the crypto-mania season, XRP has relatively traded beneath its All-time highs of $3.30.

During the March 12 market carnage which saw Bitcoin testing the new year low of $3,858, XRP was beaten low as it further plunged beneath its trend line to break the $0.18 support turned resistance level to trade then at $0.12, touching down nearly a 3-year low, tweeted a crypto analyst.

While BTC experienced slight rebound to reach as high as $6,900, XRP bulls also regained strength to squeeze up its price to as high as $0.175 in which the bulls ran out of steam and couldn’t proceed further.

It experienced a strong rejection at $0.16 to trade at its recent price. 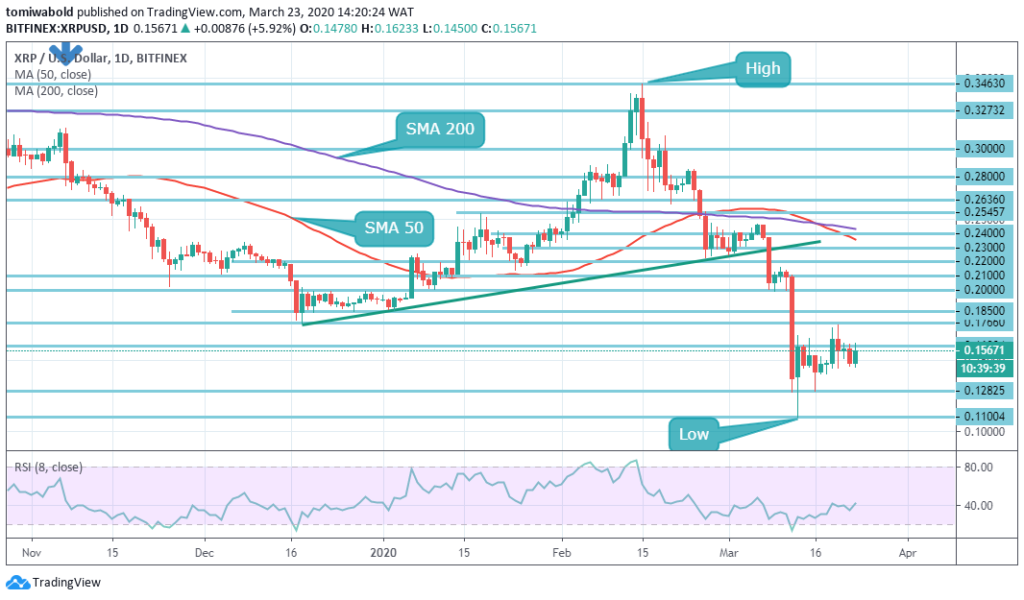 Analysts are preempting XRP bulls may take a breather as it seemed obvious there is a feasible rejection from further advancement. For the bullish momentum to be upheld, it may need to break the $0.16 resistance level, which it seemed to have established as a short-term high.

Credible Crypto, a crypto analyst sees XRP rejection at the $0.16 level as a forerunner to a correction back to the $0.12 lows after which XRP will undergo a consolidation phase.

XRP which is down by 20% to its year 2020 high may retest the $0.12 level as bullish momentum on the cryptocurrencies seem to be on pause in the past couple of days as BTC is currently trading beneath $6,000.

Of recent, Bitcoin has been a walkable guide for the direction the crypto market is heading. Analysts are paying keen attention to BTC’s next move to determine XRP’s direction.