The Buyers Are Currently Eyeing a Ride in the Upcoming Weeks to $0.30 on IOT/USD

In the last week, IOTA (MIOTA/USD) price traded alongside the Major Altcoins as the crypto market continues to rebound from the lows in March. After June 4 highs at $0.2662, it has experienced many neat patterns and several trend swings to record a recent low at $0.2012 June 15 lows. The buyers are currently eyeing a ride in the upcoming weeks to $0.30 on IOT/USD. The total market cap for IOTA now stands at $6.0 billion, with a trading volume of $9,186,225 in the last 24 hours as reported on Coinmarketcap. IOTA’s price currently shifts to $0.2155 after its downside pressure stays confined to trade sideways above $0.210. Zebra Technologies partnered with the IOTA Foundation to integrate Tangle into the Savanna enterprise platform. Zebra’s latest service called “Blockchain Traceability” was developed to send to the blockchain an RFID or barcode scan with only one API call. REST API will store data through a call-in or retrieve data from the IOTA Tangle.

*The buyers are currently eyeing a ride in the upcoming weeks to $0.30 on IOT/USD
*IOTA’s price currently shifts to $0.2155 after its downside pressure stays confined to trade sideways above $0.210
*Zebra Technologies partnered with the IOTA Foundation to integrate Tangle into the Savanna enterprise platform 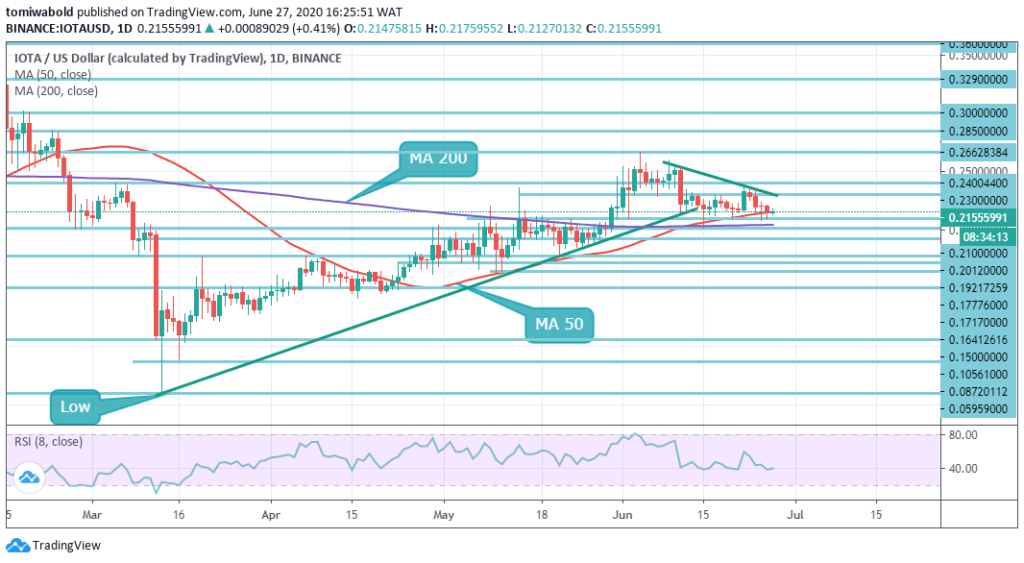 IOT/USD is changing hands at $0.2155 at the time of this post, while the rebound may be capped at $0.2300 around the horizontal resistance line. IOT/USD registered an intraday low of $0.2127 and tried to salvage some momentum. All attempts at recovery, however, may be thwarted by psychological $0.2300, bolstered on the daily chart by the descending trendline resistance.

A higher sustainable change may boost the technical context as investors are currently watching an IOT/USD ride to $0.30 in the weeks ahead. The next resistance is $0.2400 and $2662 (the June 4 high). On the downside, a combination of the slightly broken daily MA 50 and the lower line MA 200 is generating the crucial support around $0.2040 where this support is likely to restrict the sell-off and act as a bouncing-off platform for a fresh bullish surge. 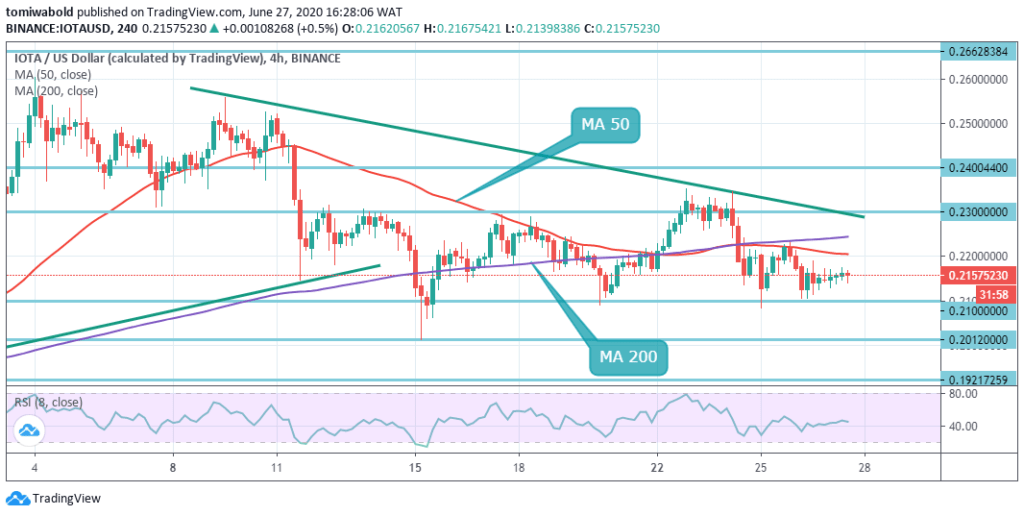 IOT/USD is holding steady in a sideways channel pattern on the 4-hour time frame, as the bulls are attempting to make a rebound following a short-term bearish cross between MA 50 and MA 200. IOT/USD rose marginally from $0.2100 over the weekend to $0.2162 over 24 hours. The RSI indicates the present market sentiment is neutral for IOT/USD.

IOT/USD spikes from June 15 low at $0.2012 to $0.2346 June 24 high as the bulls gained control and pushed past the psychological level of $0.2300 to retreat lower. The MA 50 and MA 200 indicate reducing bearish market momentum as sideways trading becomes evident, although the pair has stayed in a range after 10 straight sessions of consolidation. IOT/USD has decent support at horizontal levels of $0.2012 and $0.1921.